Coronavirus lockdown 3.0: Shramik Special trains are ferrying thousands of stranded migrant workers across the country. BJP spokesperson Sambit Patra said that Centre is funding 85% of the fare, while states are funding 15% 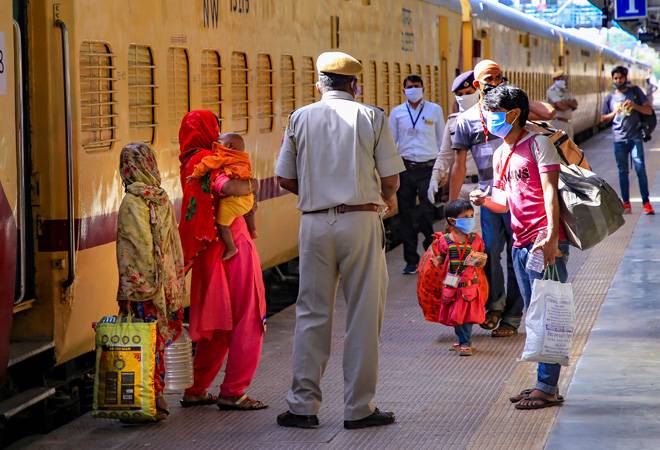 The government faced backlash on Monday for collecting ticket fares from migrant workers onboard the Shramik Special trains that are ferrying stranded migrant labourers across the country. As pressure from opposition leaders mounted, BJP spokesperson Sambit Patra said that 85 per cent of the fare has been subsidised and 15 per cent of the fare would be paid by the states.

However, according to the guidelines for these special trains issued by the Ministry of Railways (MoR) on May 2, the state governments are supposed to collect the fare from the passengers. In Clause 11 of the document, the MoR addresses the issue of sale of tickets. It says that these trains will ply only with consultation with state governments. It says that once the state clarifies the number of people that would travel, MoR would issue tickets. "The local state government authority shall handover the tickets to the passengers cleared by them and collect the ticket fare and hand over the total amount to the Railways," states the document in Clause 11 (c).

The guidelines add that state governments would give food packets and water to the passengers at the originating points.

On Monday, the Centre received backlash from Opposition leaders such as Rahul Gandhi and Uddhav Thackeray. BJP leader Subramanian Swamy had also questioned the rationale behind asking migrant workers for ticket fare considering they have had no earning in the past few weeks. Rahul Gandhi had criticised the government and said that on one hand the Indian Railways is asking for ticket fare from needy workers and on the other hand donating Rs 151 crore to PM CARES fund.

Maharashtra CM Uddhav Thackeray also said that the Centre should not ask needy workers for ticket fare. "These people have had no source of income for the last few weeks. Hence, on humanitarian grounds, the Centre should not charge them for travelling," the chief minister said. He added that social workers, NGO and individuals have borne the cost of train tickets for such workers.

Subramanian Swamy also called the government's decision 'moronic' and said that money from PM CARES should be utilised instead.

How moronic of the Government of India to charge steep rail fares from the half starved migrant labourers! Indians stranded abroad were brought back free by Air India. If Railways refuse to budge then why not make PM CARES pay instead?

He, however, soon posted another tweet saying that he spoke to Railways Minister Piyush Goyal and that the government would pay 85 per cent and states would pay 15 per cent of the fare.

BJP spokesperson Sambit Patra also said that 85 per cent of the cost would be paid by the government. He added that no tickets are being sold at the railway stations.