Other issues expected to be discussed between US Secretary of State, Mike Pompeo and his counterpart S Jaishankar are Indo-US trade relations, S-400 deal, Iran oil trade, H-1B, defence purchases, terrorism and Pakistan. 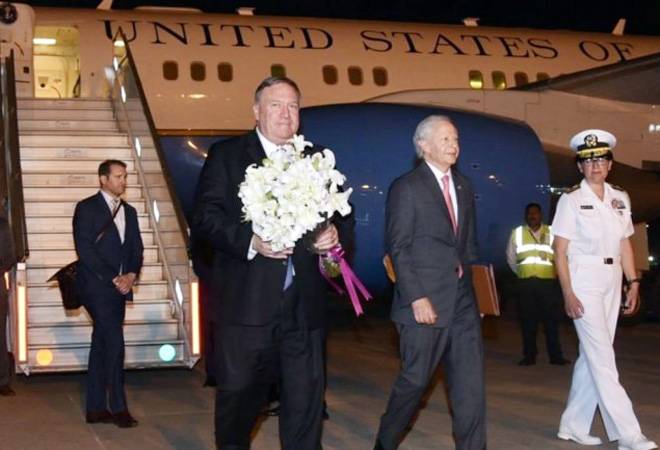 US Secretary of State, Mike Pompeo will meet Prime Minister Narendra Modi & External Affairs Minister (EAM) S Jaishankar in Delhi Wednesday. According to sources, it will be a "getting to know each other" kind of a meeting between Pompeo and Jaishankar. The two will set the groundwork for the summit level meeting between US President Donald Trump and PM Modi on the sidelines of the G20 summit in Osaka, Japan on July 28. Jaishankar will also accompany PM Modi for the summit.

Jaishankar who will host a working lunch for Pompeo on Wednesday afternoon said that India will try to find common ground on trade issues during their discussions.

"We will be meeting with a positive attitude...The meeting with Mike Pompeo will be an important one. We will definitely discuss issues related to trade between the two countries," Mr Jaishankar told reporters on Tuesday. "Both the countries are having their own interests. And it is natural to have some conflicts because of that. We will find a common ground using diplomacy. We will hold discussions with the US with a positive approach," he added.

This is the first high-level engagement between India and US government and comes at a time when both the countries have a lot of thorny issues to iron out. Other issues expected to be discussed between the two sides are Indo-US trade relations, S-400 deal, Iran oil trade, H-1B, defence purchases, terrorism and Pakistan.

However, India's biggest concern is how to deal with US sanctions against Iran and Russia. According to diplomatic sources, India will make its stance clear to the US on its $5.2 billion S-400 air-defence missile deal with Russia despite the threat of US invoking the Countering America's Adversaries Through Sanctions Act (CAATSA).

"We have a long-standing defence relationship with Russia which we cannot wish away," a source told IndiaToday. "The US is well aware of and appreciative of our requirements. Legislation is very clear on issues such as under what circumstances can a waiver be given under CAATSA. The US administration has enough flexibility to give a waiver to India on CAATSAA sanctions on purchase of S-400 air defence system," added the source.

The two sides are also going to focus on various aspects of ties from the sphere of economic, trade, defence, terrorism and security. But, there would be no signing of agreements or deals during this visit, India Today has learnt.

Ahead of his meeting with Mike Pompeo, EAM Jaishankar on Tuesday said India will meet the US Secretary of State "with a positive attitude" to find "common ground" to resolve trade issues.

As a run up to the meeting Jaishankar-Pompeo meet Kenneth I Juster, Ambassador of USA to India met Union Minister of Finance & Corporate Affairs Nirmala Sitharaman in Finance Ministry. Tariffs by India on goods was also discussed in the meeting.

Pompeo will also interact with Indian and US businesses at a round table meet and deliver a policy speech at the India International Centre in Delhi Wednesday evening.

Pompeo is in India till June 27. The US Secretary of State will also call on Prime Minister Narendra Modi before leaving for Osaka on June 27 for the G20 Summit.