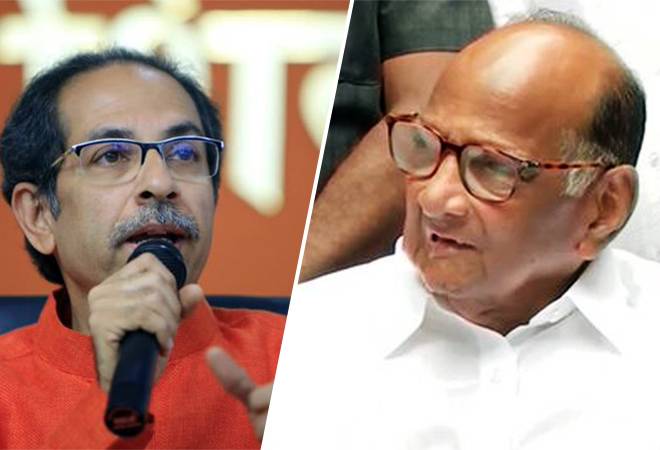 The National Congress Party (NCP) chief Sharad Pawar and Shiv Sena chief Uddhav Thackeray are going to address media at 12.30 pm on Saturday. The meeting will be regarding the latest development that took place on Saturday morning over Maharashtra's government formation.

On Saturday morning, the Bharatiya Janata Party's (BJP) Devendra Fadnavis and NCP's Ajit Pawar took oath as Maharashtra's chief minister and deputy chief minister respectively. The surprise swearing-in is being described as a political masterstroke of Sharad Pawar, who on Thursday night had said there was a consensus among the NCP, Congress and Shiv Sena that Uddhav Thackeray would lead the new government.

However,  Sharad Pawar said that his nephew Ajit's decision to support the BJP to form a government in Maharashtra was his "personal and not the NCP's".

"Ajit Pawar's decision to support the BJP to form the Maharashtra Government is his personal decision and not that of the Nationalist Congress Party (NCP). We place on record that we do not support or endorse this decision of his," the 78-year-old leader said in a tweet.

Meanwhile, Shiv Sena's Sanjay Raut on Saturday said NCP leader Ajit Pawar had stabbed the Sena in the back by joining hands with the BJP to form the government in Maharashtra.

"Ajit Pawar has stabbed the Shiv Sena in the back. Joining hands with the BJP to form the government is betrayal," he said.

The BJP-NCP government took charge in Maharashtra on Saturday after the President's rule, imposed in the state about a fortnight ago, was revoked at 5:47 am.

The BJP had emerged as the single largest party in the Maharashtra assembly election, which happened last month. However, the saffron party could not earlier stake claim to form a government after it could not reach an agreement with its former ally Shiv Sena on its 50:50 demand.