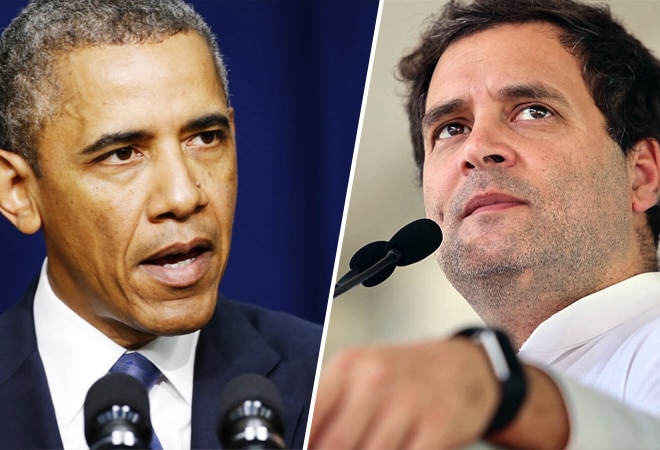 Former US president Barack Obama says Rahul Gandhi has a 'nervous, unformed quality about him'

Obama says Gandhi has "a nervous, unformed quality about him, as if he were a student who'd done the coursework and was eager to impress the teacher but deep down lacked either the aptitude or the passion to master the subject."

According to The New York Times review, the readers are told about the handsomeness of male politicians like Charlie Crist and Rahm Emanuel but not about the beauty of women, except for one or two incidents, as in Sonia Gandhi's case.

Obama called his deputy in the White House and now the US President-designate Joe Biden as a decent, honest and loyal man. "He may get prickly if he thought he wasn't given his due - a quality that might flare up when dealing with a much younger boss," he stated.

Both ex-US Secretary of Defence Bob Gates and former Prime Minister of India Manmohan Singh come across as having impassive integrity and added that Russian President Vladimir Putin made Obama think of those tough ward bosses who ran the Chicago machine. Obama says Putin "was unremarkable" physically.

He further adds that though he admires George W Bush's foreign policy measures to put an end to the Gulf war, he did not support the Iran war and considers Afghanistan a war of necessity.

The 768-page book will be released globally in 25 languages and will chart his initial political career and journey to the White House and his first term as US President. Obama's latest book is set to hit the stands on November 17, 2020, and its hardback edition will $45, while the digital copy will be priced at $17.99. The audio version will be available at $40 for downloading and $65 for a CD.

Also read: Barack Obama memoir 'A Promised Land' to be released after US Election