The Central government levies Rs 19.48 excise duty on a litre of petrol and Rs 15.33 on diesel. States charge value added tax that varies from state to state. In Delhi, VAT on petrol is Rs 16.41 and on diesel Rs 10.05. 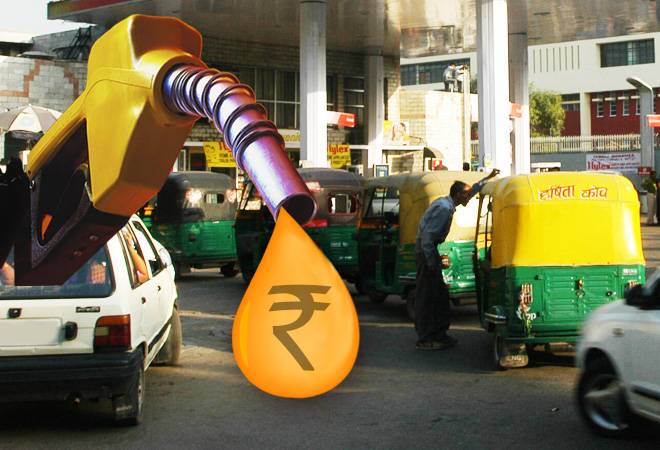 Fuel prices on Monday touched a new high with petrol at Rs 78.27 and diesel at Rs 69.17 in Delhi. Petrol price was today hiked by 15 paisa and diesel by 11 paisa. In other three metro cites, petrol is available at Rs 80.76 in Kolkata, Rs 85.93 in Mumbai and Rs 81.11 in Chennai. The prices are raised by 15 paisa in Kolkata, Mumbai and by 16 paisa in Chennai.
This is the 15th hike in a row after Karnataka Assembly elections concluded earlier this month. In the run-up to state elections in the southern state, the oil companies had stopped revising the petroleum prices for over a fortnight.
The incessant hike in petrol and diesel prices has been mostly due to rise in crude oil prices and the high taxes - excise duty and VAT - levied on fuels. The opposition parties and people have been demanding a cut in Centre and state tax on fuels. Some are even suggesting to bring petrol and diesel under the GST, hoping that it would reduce taxes -which is currently close to 50 per cent- by half. If the government includes fuels under the GST and applies the highest tax slab of 28 per cent, the price of petrol would come down by Rs 26.9 and diesel by Rs 15.4.

The Central government levies Rs 19.48 excise duty on a litre of petrol and Rs 15.33 on diesel. States charge value added tax that varies from state to state. In Delhi, VAT on petrol is Rs 16.41 and on diesel Rs 10.05.

However, Bihar Deputy Chief Minister Sushil Kumar Modi on Sunday said that 'it is a big misconception (among the people) that price of petroleum products will be reduced significantly if they are brought under GST ambit'. He said that under the GST regime, there is a practice across the world which empowers states to impose tax over and above the highest GST tax rate. He suggested that even if fuels are brought under new taxation system, the states can still impose taxes to compensate their loss.

Last week, Hindustan Petroleum Chairman and MD  Mukesh Kumar Surana said that the government should review their taxes. He said that the oil marketing companies operate on a thin margin and they cannot do much if the international cost of oil rises. Earlier, it was reported that the government may levy a windfall tax on oil producers like ONGC as part of a permanent solution to rising petrol and diesel prices.

After Prime Minister Narendra Modi-led NDA government came to power in 2014, excise duty on petrol has been hiked by Rs 11.77 per litre and that on diesel by 13.47 a litre. After moving to daily revision of fuel prices in June last year, the government had cut basic excise duty on petrol and diesel by Rs 2 per litre in October last year.
Tags: Petrol | Diesel | Excise Duty | VAT | ONGC

No role in granting clearance to Sterlite plant: Jairam Ramesh