Petrol Rs 75, diesel Rs 68! That's what they will cost if under GST

The Ecowrap report, authored by Dr Soumya Kanti Ghosh, Group Chief Economic Adviser, State Bank of India stated that Centre and states do not want to bring oil products under the GST regime as sales tax and VAT comprise a major source of tax revenue 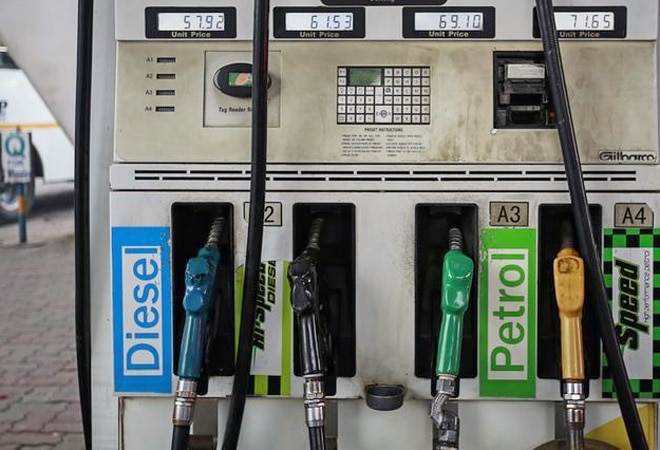 SBI stated in its Economic Research Department report that bringing petrol and diesel under the ambit of GST would reduce its prices to Rs 75 and Rs 68, respectively. At this base price, Centre and states would face revenue loss of only Rs 1 lakh crore, which is 0.4 per cent of the GDP.

The Ecowrap report, authored by Dr Soumya Kanti Ghosh, Group Chief Economic Adviser, State Bank of India stated that Centre and states do not want to bring oil products under the GST regime as sales tax and VAT comprise a major source of tax revenue. The report said that every state has its own tax structure and that each state chooses a combination of ad valorem tax, cess, extra VAT/Surcharge based on their needs. These taxes are imposed after taking into account the crude price, transportation charges, dealer commission and flat excise duty imposed by the Centre, making prices of oil products one of the highest in the world.

"A dollar increase in the crude oil prices will push up the petrol price by around 50 paise and diesel prices by around 150 paise and bring down the overall deviation by around Rs 1,500 crore under our baseline scenario. When we use this tax structure for F22, when Centre and states taxes are already so high, we see that states which have the highest rates are losing revenue if they shift to this GST regime. But this flat taxation structure brings in uniformity and as per our calculations, it brings down the burden of taxes on the common man by almost Rs 10-30 depending on the product consumed and the state in which it is consumed. Additionally, it benefits some states which do not drastically tax their petroleum products, like Uttar Pradesh," stated the report.

When crude oil/bbl declines by $10, Centre and states could save close to Rs 18,000 crore, if petrol and diesel are assumed to be at baseline of Rs 75 and Rs 68 and don't pass on benefits to consumers.

"We thus recommend that the government builds up an oil price stabilisation fund which can be used in bad times for compensating revenue loss by cross subsidising fund saved from good times, without hurting the consumer," stated the Ecowrap.

The SBI in its report also proposed an increased and graded subsidy for LPG cylinders to be provided to poor consumers that can be tapered off over a period of around five years. It suggested creating a merged database using databases of Ayushman Bharat, PM-KISAN, PMJDY, PMUY and MUDRA to provide four free cylinders every year. "Even if 5 crore people are eligible for this then the total cost to exchequer per year will be maximum Rs 16,000 crore (5 crore x 4 x Rs 800 per cylinder)," it said.

Also read: Excise duty on petrol, diesel can be cut Rs 8.5 a litre without hurting revenues