PM Modi interview with Akshay Kumar: From love for mangoes to friends with Mamata Banerjee, here's what the PM said

PM Modi-Akshay Kumar candid chat: PM revealed his one wish that he would ask from a genie in the interview 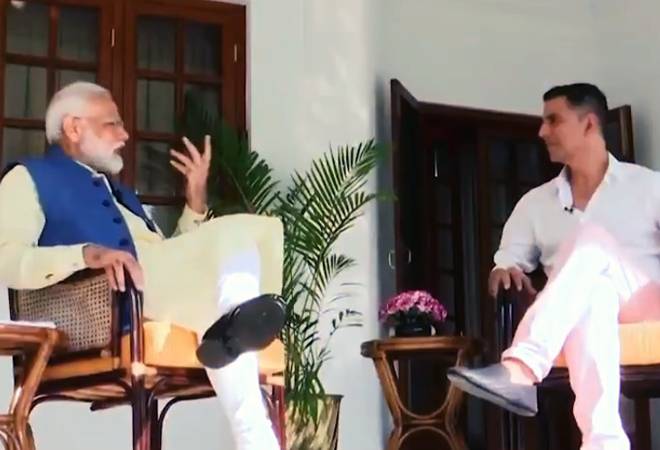 Bollywood actor Akshay Kumar took a candid interview of Prime Minister Narendra Modi at 7 Lok Kalyan marg, the PM's residence. In the interview  PM Modi spoke a lot about his life and experiences. The interview was about everything but politics and election. Here are some of the interesting moments of this interview with Akshay Kumar:

Akshay Kumar asked PM Modi, "You sleep only three-four hours, a body needs at least seven, right?" PM Modi responded, "When President Obama met me for the first time he asked me why do you do this? Now whenever we meet he asks me have you increased the amount you slept or now?"

Furthermore, PM Modi also said that he never thought that he would become Prime Minister of India. "The kind of background I come from even if I would have got a decent job my mother would have been distributing laddoos among neighbours. This is unnatural for me, sometimes I am amazed why the country loves me so much," said Modi.

PM Modi revealed to Akshay Kumar his love for Mangoes. "I love mangoes. Gujarat has a tradition of Aamras as well," PM Modi said. "While growing up, we did not have the luxury to buy mangoes. But I loved plucking mangoes directly from the tree. It used to be the best," PM Modi said.

The Prime Minister also spoke about his friendship with Opposition leaders despite their political rivalry. He said that West Bengal Chief Minister Mamata Banerjee sends him kurtas and sweets every year.

When Bollywood actor Akshay Kumar asked PM Modi three things he would ask from a genie, Prime Minister Narendra Modi said he wished for people to stop believing in genies.

On Tuesday, Akshay Kumar posted a cryptic tweet on his Twitter handla about his candid  and non-political chat with PM. The tweet sparked intense speculation. The actor eventually announced that his conversation with PM will be a 'breather' amid elections.

Akshay Kumar released a teaser of his upcoming interview woith PM Modi adding that full intewrview will be released on Wednesday 9 am.

While the whole country is talking elections and politics, here’s a breather. Privileged to have done this candid and COMPLETELY NON POLITICAL freewheeling conversation with our PM @narendramodi . Watch it at 9AM tomorrow via @ANI for some lesser known facts about him! pic.twitter.com/Owji9xL9zn

PM Modi responded saying that  ,"it was good talking to you, except politics and election."

Dear @akshaykumar, it was good talking to you about everything, except politics and elections :)
I'm sure people would like watching our conversation. https://t.co/4iyZS1n2rN

A total of four teasers were released that presented a side of PM Modi, away from campaign rallies and television interviews dominating the political slugfest  amid 2019 Lok Sabha elections.

US, Singapore, Taiwan seek to join consultations under WTO rules over India's tariffs on ICT goods