The railways recently said that it has decided to float fresh tenders for components for the third edition of the country's first indigenous train, Vande Bharat Express or Train 18. 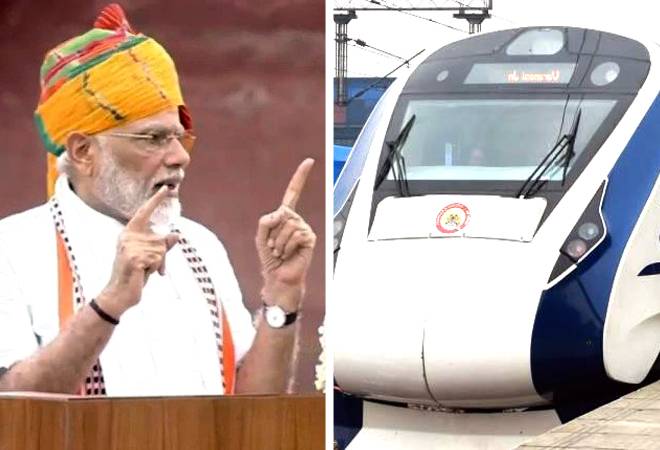 With Prime Minister Narendra Modi propping the Vande Bharat Express as a symbol of people's aspirations in his Independence Day speech on Thursday, the railways' ambitious project, which has been in limbo, is likely to get a boost.

The railways recently said that it has decided to float fresh tenders for components for the third edition of the country's first indigenous train, Vande Bharat Express or Train 18, after allegations of favouritism had cropped up during the manufacturing of the first trainset.

"People of India are no longer happy with merely any proposal for a new railway station, they want to know when the state-of-the-art Vande Bharat Express will come to their area," PM Modi said, speaking of the changing aspirations of the people.

The Chennai-based Integral Coach Factory, which manufactured these state-of-the-art trains, has also become the largest rail coach-maker in the world with 2,919 coaches being produced in a 12-month period till February this year, beating top Chinese manufacturers that annually produce around 2,600 coaches.

In his Independence Day address, Modi said that the government has decided to invest Rs 100 lakh crore in infrastructure development.

"People's thinking has changed. Earlier, people were happy with merely a plan to set up a railway station. Now people ask when will Vande Bharat Express come to my area. People do not want only good railway stations or bus stations, they ask when is a good airport is coming," he said.

All tendering process for the train was suspended and a vigilance case initiated in the matter.

"The PM speaks about Train 18/Vande Bharat Express with affection a glimmer of new hope?" asked Sudhanshu Mani, the former general manager of ICF who was instrumental in rolling out the first Train 18, tweeted minutes after the PM mentioned the train in his speech.