In August 20, the Supreme Court had granted Prashant Bhushan time till August 24 to apologise for his two tweets against the judiciary 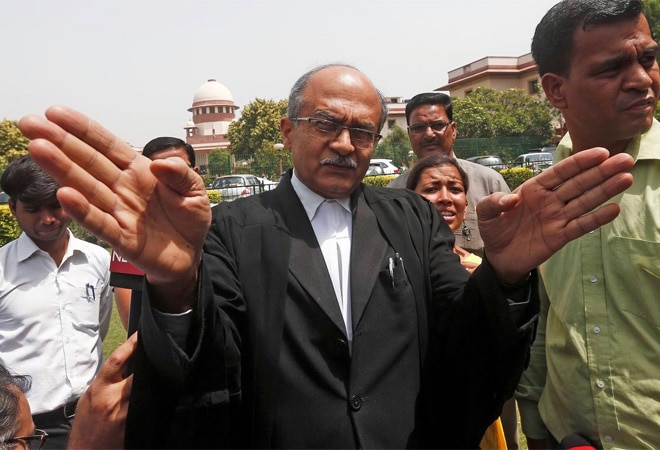 Activist-lawyer Prashant Bhushan refused to apologise to the Supreme Court on Monday. On August 20, the SC had granted Bhushan time till August 24 to apologise for his two tweets against the judiciary.

Bhushan said, in a statement submitted to the apex court, that his tweets represented his bona fide beliefs which he still continues to hold.

"An apology has to be sincerely made. If I retract a statement that I otherwise believe to be true or offer an insincere apology that in my eyes would amount to contempt of my conscience and of an institution (Supreme Court) that I hold in the highest esteem," the statement said. "An apology for expression of beliefs, conditional or unconditional, would be insincere," Bhushan added.

Bhushan said that as an officer of apex court it is his duty to speak up when he believes there is a deviation from the court's sterling record.

"Therefore I expressed myself in good faith, not to malign the Supreme Court or any particular Chief Justice, but to offer constructive criticism so that the court can arrest any drift away from its long-standing role as a guardian of the Constitution and custodian of peoples' rights," he said.

Bhushan added "My tweets represented this bona fide belief that I continue to hold. Public expression of these beliefs was I believe, in line with my higher obligations as a citizen and a loyal officer of this court."

In his first controversial tweet, Buchan had written, "When historians in the future look back at the last six years to see how democracy has been destroyed in India even without a formal Emergency, they will particularly mark the role of the SC in this destruction, and more particularly the role of the last four CJIs."

The second tweet was about CJI Bobde and said, "The CJI rides a Rs 50-lakh motorcycle belonging to a BJP [Bharatiya Janata Party] leader at Raj Bhavan, Nagpur, without wearing a mask or helmet, at a time when he keeps the SC on lockdown mode denying citizens their fundamental right to access justice!"

The apex court, on August 14, had held Bhushan guilty of criminal contempt for his two derogatory tweets against the judiciary saying they cannot be said to be a fair criticism of the functioning of the judiciary made in the public interest.

Businesses with turnover up to Rs 40 lakh exempted from GST