While farmers claim that the new farm laws will benefit corporates, the government has maintained that the reforms will liberalise farming and help increase the income of farmers. 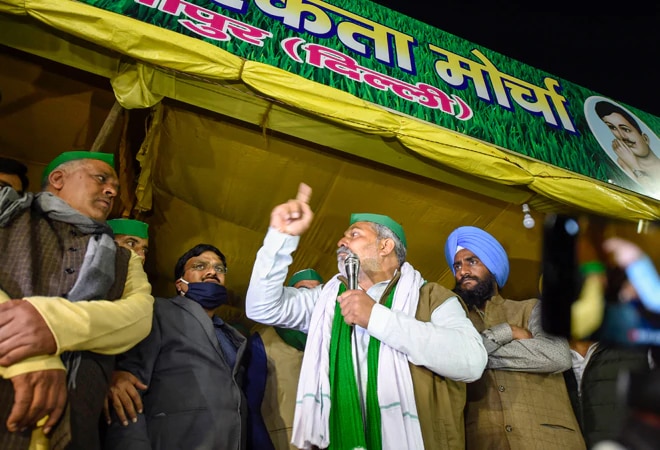 Tikait said the farmers will block the Delhi-Noida border.

Bharatiya Kisan Union leader Rakesh Tikait on Tuesday said that the farmers protesting against the Centre's three new farm laws will block the border between national capital and neighbouring Noida.

Farmers, mainly from Haryana, Punjab and western Uttar Pradesh, have been protesting at the borders of Delhi for over 3 months, under the aegis of Sanyukt Kisan Morcha (SYM), against the new farm laws. SYM is an umbrella body of 40 farmer unions.

News agency ANI quoted Tikait as saying that the farmers will block the Delhi-Noida border. However, he said the date for the same has not been decided yet.

Yes we will block the border (Delhi-Noida border).The committee is yet to decide the date: Bharatiya Kisan Union leader Rakesh Tikait pic.twitter.com/zePJMQzx7f

While farmers claim that the new farm laws will benefit corporates, the government has maintained that the reforms will liberalise farming and help increase the income of farmers. The government and farm unions have failed to reach any solution on the issue despite 10 rounds of talks between them.

In January, the government had proposed to suspend the farm laws for 18 months and form a joint committee to discuss the legislations and address the concerns of farmers, but the proposal was rejected by farmer leaders.

The protesting farmers have now called for another 'Bharat Bandh' on March 26. The all-India strike has been called to mark the completion of four months of their agitation against the new laws.

'India should not go back to licence raj': Nobel laureate Paul Krugman

Retail sales at 93% of pre-COVID levels in Feb; industry expects revival by June