To begin with, ten empty cryogenic road tankers are likely to be dispatched tomorrow to fetch oxygen from the industrial belt of Jharkhand for the state of Maharashtra 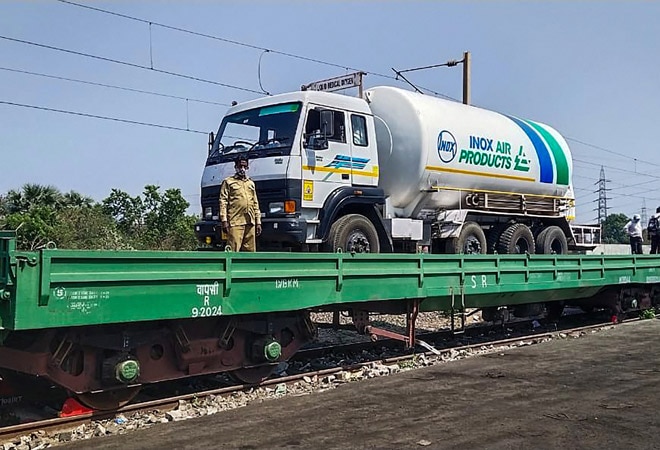 Railway ministry on Sunday said that it is getting ready to transport Liquid Medical Oxygen (LMO) and oxygen cylinders across the key corridors amid the raging second wave of the Covid-19 pandemic.

To begin with, ten empty cryogenic road tankers are likely to be dispatched tomorrow to fetch oxygen from the industrial belt of Jharkhand for the state of Maharashtra, which is severely affected by the second wave.

"Railways immediately explored the technical feasibility of transportation of LMO. LMO has to be transported through Roll On Roll Off (RORO) service with road tankers placed on flat wagons," the release added.

It may be noted that the Railway Ministry has formulated a policy for transport of LMO to the various states on April 16, outlining the guidelines for commercial booking.

The ministry also said that trial runs were conducted today at Boisar to ensure that parameters of transportation are tested.

After a meeting with the Maharashtra government officials on Saturday, it was decided that the tankers would be organized by transport commissioner, Maharashtra, according to the Railway release. These empty tankers would be moved from Kalamboli/Boisar railway stations in and near Mumbai, and sent to Vizag and Jamshedpur/Rourkela/Bokaro, for loading of liquid medical oxygen, the release added.

The railway ministry has made a tentative  movement plan for dispatch of ten empty tankers tomorrow as the Maharashtra government has assured to provide the tankers.