Once again retail inflation remained above Reserve Bank of India's medium term target of 4-6 per cent, which means a rate cut is not likely to happen in the next monetary policy meet Retail inflation, measured via Consumer Price Index, slid down slightly to 6.69 per cent in August, as compared to 6.73 per cent in July, data released by National Statistical Office showed. However, it once again remained above the Reserve Bank of India's medium term target of 4-6 per cent. Inflation in food basket also eased to 9.05 per cent last month, against 9.27 per cent in July.

"It may be seen that as various pandemic related restrictions were gradually lifted and non-essential activities started resuming operations, availability of price data has also improved," the National Statistical Office said.

The Reserve Bank of India closely monitors retail inflation while deciding upon key policy rates. During its last meeting in August, RBI's monetary policy committee had left the repo rate unchanged due to inflationary pressures. RBI Governor Shaktikanta Das has warned that retail inflation is likely to remain at high levels in the September quarter, and ease down as time goes by. 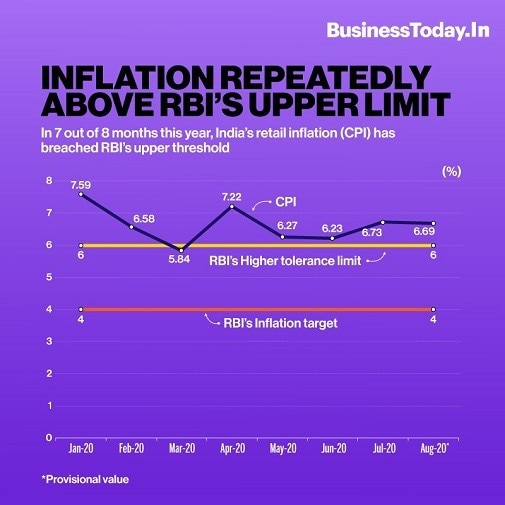 Earlier today, wholesale inflation, measured by Wholesale Price Index, rose to 0.16 per cent after remaining in negative territory for the past four months on the back of costlier food and manufactured items. The latest print of factory output was dismal too as the Index of Industrial Production (IIP) contracted by 10.4 per cent in July mainly due to lower output of manufacturing, mining and power generation, marking the fifth monthly decline in a row.

In the economic review for the month of August, Centre had pointed out that economic activity is picking and India is witnessing a V-shaped recovery along with the rest of the world. On Sunday, Chief Economic Advisor KV Subramanian stated that retail inflation will come down as supply-side frictions are removed with easing lockdowns.

"If you look at inflation... it's primarily because of those supply-side frictions, but as local lockdowns are actually being reduced, these frictions should basically go down," Subramanian said. "Overall, the difference between wholesale and retail inflation is primarily due to supply-side factors which should decrease and therefore going forward even the retail inflation should ease."

"Despite unlocking phases, the supply-side disruption is surging the food and fuel prices. The inflation figure for the fifth month in a row remains above RBI's medium term target of 6 per cent, so RBI rate cut hopes still remains low at least at the October policy," said Rahul Gupta, Head of Research - Currency, Emkay Global Financial Services.

No slum dwellers along railway lines in Delhi to be removed till final decision: Centre to SC