In 2018-19, India produced an all-time high 33.16 million tonnes of sugar but for the first time since 2016-17, the country will produce less sugar than the year before at about 26 million tonnes 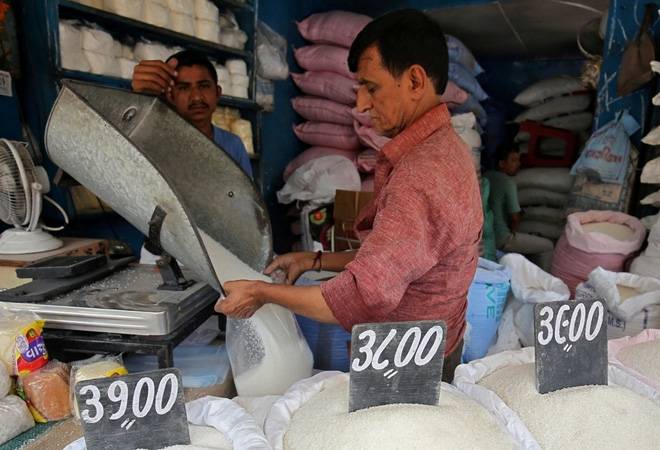 Facing a glut situation, a slowdown is not necessarily bad for the sugar industry

Sugar production in India is set to decline by a record 21.6 percent, the steepest in over a decade, during the sugar season 2019-20 as errant monsoon this year is likely to lead to a 12 percent less acreage this year.

In 2018-19, India produced an all time high 33.16 million tonnes of sugar but for the first time since 2016-17, the country will produce less sugar than the year before at about 26 million tonnes, preliminary estimates by industry body Indian Sugar Mills Association (ISMA) revealed.

The estimated production figure is also around 8 percent lower than the earlier estimate of 28.2 million tonne that ISMA had projected in July 2019. 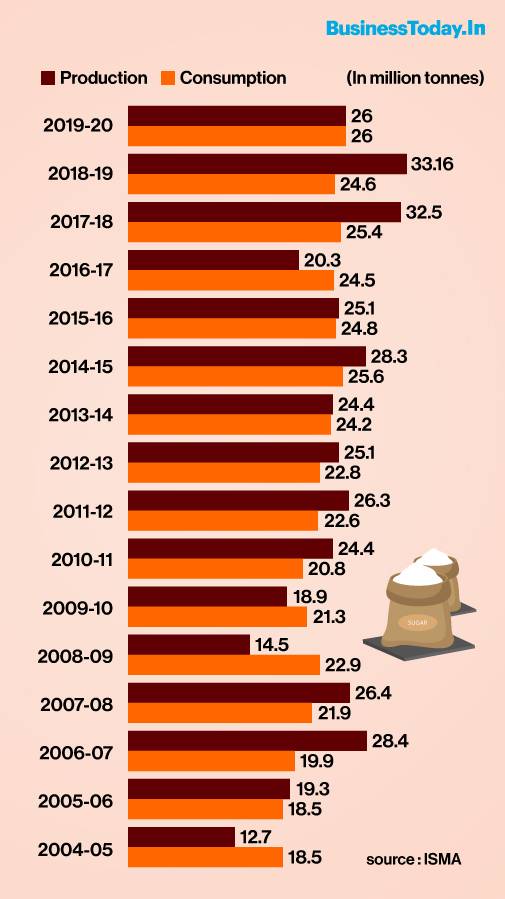 "As per satellite images of October 2019 and the fact that we did not have normal rainfall, sugar production during the current 2019-20 sugar season is expected to be lower than what was expected about 4 months back.  The crop in the two main sugarcane growing states--Maharashtra and Karnataka which contribute around 35 - 40 percent of country's sugar, have been adversely impacted due to various reasons," ISMA said.

"The sugarcane acreage in Uttar Pradesh, the leading sugarcane and sugar producing state in the country is also seen to be slightly lower, as compared to 2018-19 SS. But taking into account the crop condition, weather conditions and area under the high yielding cane varieties in the state, an improvement in yield per hectare is expected. Hence, sugar production in U.P. in 2019-20 SS is estimated to be around 12 million tonnes, which is more or less at the same level of 11.82 million tonnes produced in 2018-19 SS," it added.

The projections confirm widespread fears that errant monsoons this year may have adversely affected crop acreage in the country. Monsoons were patchy in the first half of the season--June and July, but widespread in the second half--August and September, leading to initially a drought and then a flood like situation in many areas.

"Floods affected important cane growing areas Kolhapur, Sangli, Satara and Pune in August - September 2019. Due to water logging in cane fields for long duration, some of the cane has been destroyed completely, while some areas have been partially affected in terms of yield and recovery. Hence, cane area for 2019-20 harvesting has further dropped to 7.76 lac hectare, against what was reported about 4 months back.  It is thus about 33% less than last year's acreage of 11.54 lac ha," it said.

Incessant rains in the first fortnight of August 2019 also affected areas in North Karnataka like Belgaum and Bijapur Districts. As a result, area under sugarcane in 2019-20 SS in the state is also expected to fall  by 21 percent to about 3.99 lac. ha as against 5.02 lac ha. in 2018-19 SS.

The fall in production however, is not a bad thing for the industry that has faced a glut situation in the domestic market for much of the last five years. The oversupply has kept sugar prices low impacting the profitability of the industry which in turn has impaired their capacity to pay farmers. Sugar mills across the country owe around Rs 15,000 crore to sugarcane farmers.

"We need more freedom and transparency in this sector in pricing of sugar. The government keep increasing the minimum support price of sugarcane as it keeps the farmer vote-bank happy but in a glut situation in the market we are not able to increase prices and pass it on to the consumers," says a sugar mill owner. "This is also a cash rich crop so farmers are happy to grow more even though it is not required. It may sound strange but its good that production has taken a hit this year."

The estimated consumption of sugar for 2019-20 has been pegged at around 26 million tonnes which would be the same as the amount of sugar that will be produced. The industry is however carrying an all time high carry over stock of 14.58 million tonnes this year, which means there is still an oversupply of the commodity in the market. Typically the industry is expected to carry a buffer stock of around 5 million tonnes on 1st October of any year as opening stock.

"From the estimates for next year's production, it is clear that there will still be a small surplus over the domestic requirement in 2019-20 sugar season, and, therefore, there will be need for India to export sugar in the next year also," ISMA had said in July.

A slowdown may not always be a bad thing.