Taxing the untaxed IX: Is India blissfully ignorant to the menace of shell companies?

Shell companies are intrinsic to the global and Indian economy, but they require a high level of oversight to prevent them from becoming conduits for illicit financial flows As financial scams tumbled out in India in recent times, more and more shell companies came out of the woodwork

That, however, poses a great challenge for the Indian regulatory authorities. Without a better understanding of their activities and effective oversight, the chances of shell companies being misused are very high. Here are some recent instances.

Shell companies flooding out of the woodwork

As financial scams tumbled out in India in recent times, more and more shell companies came out of the woodwork.

On March 7, a day after the Yes Bank's management was superseded by the RBI and the residence of its founder Rana Kapoor raided, the ED officials alleged that one of the bank's defaulters, the Dewan Housing Finance Corporation Ltd (DHFL) had siphoned off Rs 13,000 crore using 79 shell companies.

The next day, when Kapoor was arrested, ED officials alleged that a part of the siphoned-off money had reached him and his family and that they had invested more than Rs 2,000 crore through several shell companies they ran or controlled.

Initially, the number of shell companies run or controlled by Kapoor and his family was said to be 'over a dozen'. A week later it went up to 78 and another week later, to 'over 102'. By this time the CBI had joined the probe.

The DHFL is a deposit-taking non-banking financial company (NBFC-D) which was sent to bankruptcy proceedings by the RBI in November 2019. It had a debt of over Rs 83,000 crore.

In 2018, the ITD had alleged that a subsidiary of yet another Yes Bank defaulter, the Infrastructure Leasing & Financial Services Ltd (IL&FS) had used shell companies to claim expenses in multiple non-existent infrastructure projects and divert funds for a commission. The IL&FS is a non-deposit taking NBFC which had gone to the bankruptcy court (National Company Law Tribunal or NCLT) in September 2018 on its own (seeking its protection), along with 40 of its subsidiaries, including the one (IL&FS Rail Ltd) which allegedly used shell companies for illicit purposes.

The Punjab National Bank (PNB) fraud case had also hit the headlines in 2018. The ED officials had alleged that the fugitive billionaire diamond merchant Nirav Modi laundered Rs 5,921 crore in 2017 through 17 shell companies based in India.

The officials had further alleged that Nirav Modi's uncle Mehul Choksi, a fellow fugitive billionaire diamond merchant, ran a far larger number of shell companies. While the ED had shortlisted top 140 shell companies for an in-depth probe, the SFIO was probing at least 400 shell companies.

Both Modi and Choksi had turned fugitive after duping the PNB of Rs 14,000 crore by obtaining Letters of Undertakings (LoUs) fraudulently.

Three things become clear from these examples: (a) shell companies are an integral part of the Indian economy (b) they are being used for questionable financial deals and (c) there is little regulatory oversight over them.

Also Read:Taxing the untaxed VII: Who supports tax havens and how do they flourish?

The role of shell companies, particularly the offshore ones, came to the fore in a big way through the investigations into the Panama Papers of 2016 and Paradise Papers of 2017.

The Panama Papers provided data on some 214,000 such companies. The ICIJ investigation showed a little known Panama-based law firm Mossack Fonseca selling shell companies across the world for $1,000. For an extra price, it provided sham directors and much more.

It revealed that 140 politicians, several celebrities, drug dealers, alleged arms traffickers, and others obscured their wealth (legally and illegally) and carried out questionable deals through "hard-to-trace companies in offshore havens". These companies are spread across 200 countries/ territories.

The Paradise Papers also revealed the use of shell companies and tax havens by more than 100 multinationals to reduce taxes. To get an overall picture of their activities, here is an estimate by the International Monetary Fund-University of Copenhagen.

In their 2018 study, they estimated that multinational companies had invested about $12 trillion globally in empty corporate shells with no actual economic activity. In 2019, the amount went up to $15 trillion or almost 40% of the total global FDI. This was called 'phantom investment', which was meant to avoid tax

Now, here is some basic information about what a shell company is and why are they so scary.

India: No definition of a shell company

When it comes to India, the sobering fact is that there is no legal definition of a shell company. And this can lead to unimagined situations. Here is an illustration.

On May 27, 2019, Mumbai's Securities Appellate Tribunal (SAT) set aside market regulator SEBI's directive to stock markets for harsh actions against an alleged shell company. This company was among the '331 listed shell companies' that the Ministry of Corporate Affairs (MCA) had flagged off to SEBI for action in 2017.

While dismissing SEBI's action for not even trying to establish first whether it was a shell company or not, the SAT made an observation that needs attention.

It said (in May 2019): "In Assam Company India Ltd. and Ors. vs The Union of India & Ors. Manu/GH/01542/2019 the Gauhati High Court held that there is no statutory definition of a shell Company in any laws of India. However, in popular parlance, a shell company is artificially identified with dubious activities concerning serious economic offences such as tax evasion, money laundering, benami transactions, conversion of black money into white, round-tripping with a host of other associated offences. No such finding has been given by the respondent except that the appellant company is not carrying out any production activities since September 2000."

Here, 'respondent' are SEBI and BSE and 'appellant' the alleged shell company.

Two things are clear: (a) lack of legal definition can be a serious handicap for oversight mechanism and (b) how should a company not carrying out any production activities for 17 years (from 2000 to 2017) be treated is not clear.

Many shades of shell companies

Contrary to India, the US defines shell companies.

According to its Securities and Exchange Commission (SEC), "The term shell company means a registrant, other than an asset-backed issuer as defined in Item 1101(b) of Regulation AB (229.1101(b) of this chapter), that has: (1) No or nominal operations; and (2) Either: (i) No or nominal assets; (ii) Assets consisting solely of cash and cash equivalents; or (iii) Assets consisting of any amount of cash and cash equivalents and nominal other assets."

Here is how it explains the shell companies.

It then went on to define three categories of shell companies, their roles and the threats they pose.

Anonymous shell companies are the ones that provide anonymity while guaranteeing control over the shell company and its resources. The ultimate beneficiary (UBO) remains hidden behind this or behind a chain of interconnecting shell companies, often in several jurisdictions. "Such companies are often mentioned in relation to tax evasion, corruption, money laundering, and terrorist financing." (Like the ones on the Panama Papers)

Special purpose entities (SPEs) are ones whose core business consists of group financing or holding activities. They have no or few employees, little or no physical presence in the host economy and their assets and liabilities represent investments in or from other countries. These firms are usually mentioned with regard to use in aggressive tax planning (another term for tax avoidance).

While reminding that "the use of shell companies can be legal" it summed up what they are in the following words.

When and why shell companies present a threat

This was succinctly explained in the same report and is reproduced below. 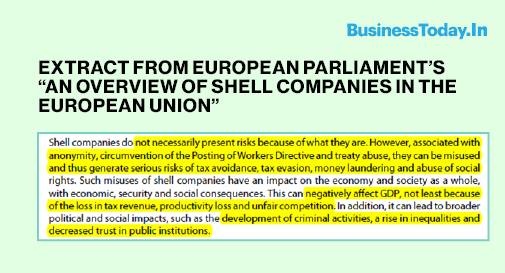 Too tough to number or identify shell companies

Where this European Parliamentary study failed is quite critical. It did try its best but then came to the conclusion that: "Reliable data on shell companies however is not available, especially in the case of the first two types of shell companies."

No number means failure to identify shell companies. And without identification, regulatory measures can be meaningless.

Not only is there no legal definition of a shell company in India, there is no credible study on them either.

The MCA and SEBI's action against the 331 listed shell companies in 2017, which was seen as a major drive against such entities, received a major setback. The SAT order of May 2019 set it aside for one, but since the same course of action had been taken for all 331 alleged shell companies, the rest would have benefitted similarly.

Given this state of affair, it is not clear what action awaits the shell companies detected in recent investigations.