Taxing the untaxed VIII: How India and multilateral bodies are fighting tax avoidance

So far, their progress is mixed with individual countries taking more aggressive positions to bring a change to the impact of what would be known several years from now 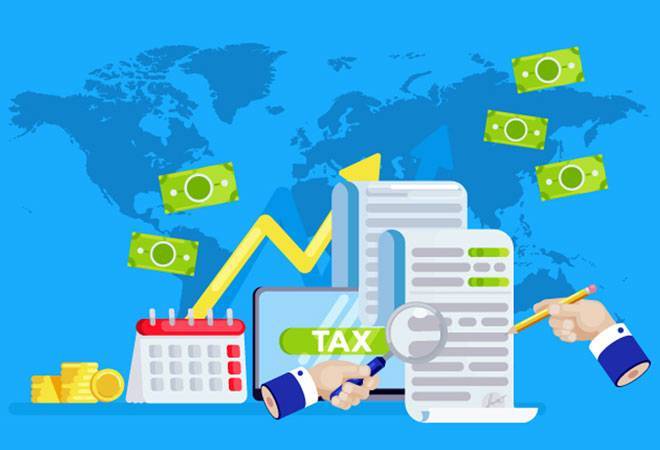 Some countries like Austria, Czech Republic, France, India, Italy, New Zealand, Spain, and the UK are considering or have progressed in introducing a minimum of digital sales tax to counter profit-shifting

Two significant multilateral players-the Organisation for Economic Co-operation and Development (OECD) and G20 - flagged off the major areas of concerns as (a) erosion in domestic tax base (base erosion) and (b) profiting shifting to offshore jurisdictions (tax havens) because MNEs were exploiting gaps and mismatches between different countries' tax systems.

That is how the Base Erosion and Profit Shifting (BEPS) initiative began in 2012 by the OECD-G20. Over 135 countries are now collaborating in the effort, with far more than 45 members in these multilateral bodies (11 G20 members are also OECD members).

According to their estimate, the BEPS practices cost countries $100-240 billion (or Rs 7.4-17.8 lakh crore at an exchange rate of Rs 74) in lost revenue annually, equivalent to 4-10% of the global corporate income tax revenue.

Also Read:Taxing the untaxed VII: Who supports tax havens and how do they flourish?

In October 2015, a 15-point action plan was spelt out by the OECD-G20 under the BEPS initiative to achieve three broad objectives.

One was to create new rules to eliminate double non-taxation. The Double Tax Avoidance Agreements (DTAAs) were meant to save those taxpayers from paying double taxes on the same income who are residents of one country but generate incomes in another. But the DTAAs ended up ensuring double non-taxation due to the involvement of no-tax or low-tax jurisdictions (tax havens) and myriad financial instruments being used.

Two, fixing the existing rules on transfer pricing, treaty shopping and definition of permanent establishment which help in tax avoidance or non-taxation.

Three, bringing transparency in tax data, when and how much tax is being paid by multinationals and country-by-country (CbC) reporting of such tax incidents etc.

In 2019, the 15-point action was grouped into "two pillars" of action for finding solutions.

Pillar One relates to allocation of taxing rights between jurisdictions; fundamental features of the international tax system, such as the nature of permanent establishment and applicability of arm's length policy; future of multilateral tax co-operation; prevention of unilateral measures and taxing highly digitalised MNEs (Google, Amazon and others).

Pillar Two relates to a minimum level of taxation or the right of jurisdictions to "tax back" where other jurisdictions have not exercised their taxing rights or the payment is subject to a low level of effective taxation.

The first paragraph of this report, Statement by the OECD/G20 Inclusive Framework on BEPS on the Two-Pillar Approach to Address the Tax, as reproduced below, says it all

Before spelling out these in clearer terms, here is another extract to explain what "progress" in Pillar Two means.

Now, everything is clear: (a) no consensus yet on what to do it or how (b) there could be a consensus on these by the end of 2020.

However, this does not mean 'no' progress in the fight against tax avoidance

A mixed bag of achievements and progress

Many countries have taken various initiatives within the BEPS framework or otherwise.

Some countries like Austria, Czech Republic, France, India, Italy, New Zealand, Spain and the UK, are considering or have progressed in introducing a minimum of digital sales tax to counter profit-shifting. These range from 2% (the UK) to 7% (Czech Republic) of sales. Their focus is on corporate sales, not corporate profits, to circumvent bilateral nation-to-nation tax treaties that may exist.

Some have enacted the General Anti Avoidance Rules (GAAR), like India, the US, the UK, France, Germany, the Netherlands, Canada, New Zealand, China, Poland and Australia.

The Financial Secrecy Index (FSI 2020) brought out by the Tax Justice Network (TJN) in February this year, found that the 133 countries/jurisdictions it ranked on the basis of how their legal and financial regulations allow individuals and entities to hide and launder money had, on an average, reduced their contribution to global financial secrecy by 7% from their FSI 2018 scores. The TJN uses 'secrecy jurisdiction' as another term for tax havens.

Most notably, Switzerland reduced its secrecy contribution by 12% and dropped from number 1 in 2018 FSI ranking to number 3 in 2020.

On the other hand, the UK and the US, both major players in the OECD and G20, had done the reverse.

The overall performance of the OECD (36 members) came under sharp criticism.

The TJN talked about "hypocrisy" of the OECD countries in curbing financial secrecy by "outsourcing" financial secrecy to "their dependencies". 'Dependencies' are territories under the legal and administrative control of another country, like the Cayman Islands is a dependency of the UK (more on this later).

The relevant part of the comment is reproduced below. 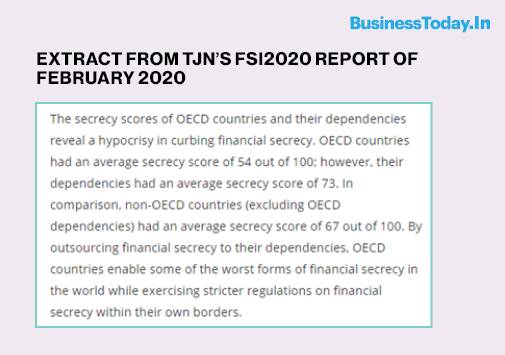 Others have expressed their reservations about the OECD-G20 initiative too.

For example, Nobel laureate Joseph Stiglitz, in his October 2019 article, Corporate tax avoidance: it's no longer enough to take half measures, took note of the BEPS deliberations and said: "Unfortunately, the current proposals for reforming global taxation simply don't go far enough. Multinationals must be compelled to do their part."

It is instructive to look at the FSI 2020 list closely.

That would reveal that 35 of 36 OECD countries figure in the list of 133 secrecy jurisdictions ranked in it. The only exception is the Czech Republic.

As a matter of fact, nine of them are in the top 25 rankings and 5 in the top 10 standings. Similar is the case with the G20 countries. Nineteen of the 20-member G20 are in the FSI 2020 list, including 2 in top 10. The only one left out of the list is the European Union. They figure prominently in the TJN's Corporate Tax Haven Index too.

For the first time in 2019, the TJN brought out its first Corporate Tax Haven Index in 2019 (CTHI 2019) as a supplement to its FSI. It ranked the world's most important tax havens for multinational corporations, according to how aggressively and extensively they help MNEs to escape paying tax and erode tax revenues of other countries. UK and its satellite tax havens

The UK deserves a special treatment.

It ranked 12 in the FSI 2020 list despite a relatively low secrecy score, 46 of 100. That is because the UK is "at the core of a global web (or City of London's spider's web) of closely associated secrecy jurisdictions (tax havens)".

The CDs and OTs are jurisdictions where the British Queen is the head of state with powers to legislate, appoint key officials and the UK government holds various other powers.

The 10 UK satellites find prominent place in the CTHI 2019. The graph below presents the UK and its satellites with their FSI 2020 and CTHI 2019 rankings. This is by no means a discovery but another confirmation of what the world has known and lived with it for decades. 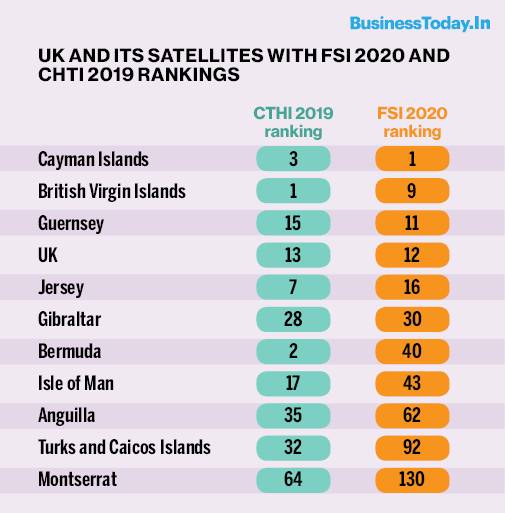 The fear that the UK would turn into 'Singapore-on-Thames' (low-tax, lax regulations), which first surfaced after the 2016 Brexit vote, has now revived particularly when the EU as an entity reduced their secrecy contributions by 8% in 2020 compared to 2018.

Apart from enacting the GAAR, the reporting for which is scheduled from FY21, India has taken several measures.

One, it has renegotiated the DTAA treaties with Mauritius, Singapore, and Cyprus in 2016 to provide for source-based taxation on capital gains (equity participation).

Two, it has signed the Multilateral Instrument (MLI) with more than 65 countries which would modify its DTAAs to make way for taxing profits where substantive economic activities happen. This would come into effect from FY21, subject to ratification by the other signatories (22 so far).

India had signed DTAAs with 96 countries.

Three, India has enacted Country-by-Country (CbC) reporting provision for bringing in tax transparency. On March 19, 2020, the Income Tax Department notified a designated authority for it, paving the way for it from FY21.

The benefits are, therefore, for the future to count.

As of now, Swati Verma, a researcher from the Institute for Studies in Industrial Development (ISID), points out the gaps in the renegotiated treaties with Mauritius, Singapore and Cyprus. She says only the equity investment is covered, other securities are exempt.

"The gains arising from other securities like mutual funds, exchange-traded derivatives, compulsorily convertible and non-convertible debentures remain exempt from taxation in India and offer beneficial options for investing illicit cash", she comments.

Meyyappan Nagappan, a tax expert with the law firm Nishith Desai Associates, says the measures India has taken should help in targeting tax avoidance in the future. He has a word of caution though.

He says: "However, that (India's measures) should not be confused with several issues today which arise in relation to where the taxes should be paid, which remains unresolved between different governments in the world. For instance, if a multinational has to pay 20% of its net profits as taxes, the question of attribution or to which country these taxes should be paid to, is a hotly debated question. As per the current rules, source countries like India do not get much tax."

He further adds, "It is also not entirely clear whether the stand being taken that a high proportion of such amounts should legitimately be paid to India is justifiable based on evidence. As a result, when different countries cannot agree and unilaterally impose or increase taxes, companies get caught in the middle and may end up suffering from double taxation in the future, which could have adverse effects."

His warning about unilaterally imposed tax is also a hotly debated topic globally.