Tea production to hit multi-year low in 2020 due to lockdown, floods

While the industry was trying to recover from prolonged lockdown, water logging and flooding in major tea growing areas added to the woes of tea industry Tea production in India is expected to fall to multi-year low in the current year. Production is likely to fall by 37 per cent to 878 thousand tonnes on account of the coronavirus-induced nationwide lockdown and the torrential rains in the northern part of the country.

The production was badly hit during the March-May 2020 period due to the restrictions in the country amid the spread of the pandemic. Tea gardens and manufacturing units across the country witnessed huge decline in production during this period. Production plunged by 41.4 per cent in March 2020. The fall was steeper at 53.8 per cent in April 2020 as the entire month was under lockdown but with easing restrictions, it contracted to 28.3 per cent in May 2020 and fell by 8 per cent in June. On a cumulative basis, the production declined by nearly 26 per cent to 348.2 thousand tonnes during January-June 2020. 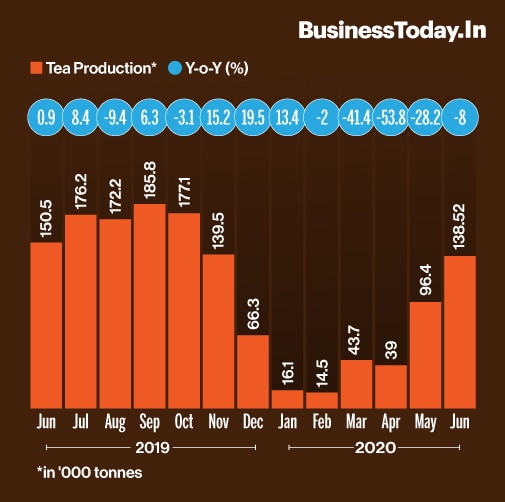 While the industry was trying to recover from prolonged lockdown, water logging and flooding in major tea growing areas added to the woes of tea industry, the report added. The major tea growing regions in Assam received excessive rains in May, June and July 2020. July is usually the peak tea-producing month in which the best quality tea is produced in Assam. Floods during this month washed away a sizeable chunk of plantations and destroyed tea plantations in Dibrugarh, Jorhat and Golaghat districts. Assam accounts for around 50 per cent of the total production in India. Total production in the state plunged by 40 per cent to 132.8 thousand tonnes during January-June 2020 compared to the corresponding period last year. Tea production in Assam is likely to have declined heavily in July 2020.