"Twenty DCP-rank officials will be there. As many as 1,000 personnel from local police, anti-drone teams and NSG commandos will be there. The entire area around the venue will be sanitised," says a police official 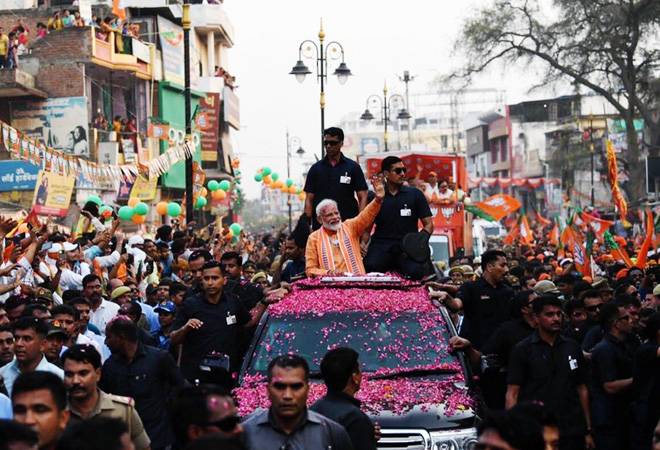 Prime Minister Narendra Modi will address a rally on Sunday at the large Ramlila Maidan, a little over a kilometre from Old Delhi's Daryaganj that was hit by violence during a protest against the amended Citizenship Act. An elaborate security arrangement has been made for the rally. According to a senior police official, 20 companies of outside force will be deployed. Each company has 70-80 personnel.

"Twenty DCP-rank officials will be there. As many as 1,000 personnel from local police, anti-drone teams and NSG commandos will be there. The entire area around the venue will be sanitised," the official said.

Area sanitisation means movement of locals will be restricted, shops will be closed and security personnel will be deployed. Traffic police personnel will be deployed along the route to be taken by the prime minister, the official said. Sources said senior officials remained in a huddle till early morning on Saturday to discuss the security. In the meeting, it was decided that social media should be monitored to stop rumour-mongering, especially in the wake of ongoing protests against the contentious citizenship legislation.

Checking of vehicles has been stepped up near border areas of Delhi to ensure "unscrupulous" elements do not enter the national capital, the sources said. A multi-level security arrangement will be in place, with CCTV surveillance of all the routes leading to the venue and snipers being positioned atop buildings to ensure security, they said.

Delhi Police is in close touch with SPG and Bharatiya Janata Party for security arrangements during the rally. The Delhi BJP has also deployed volunteers as part of its security arrangements for the rally. In a statement, senior BJP leader Vijay Goel said preparations for the rally, being organised to thank Prime Minister Modi for giving ownership rights to 40 lakh residents of 1,731 unauthorised colonies, are in full swing.

A total of 11 lakh signatures by residents of unauthorised colonies will be handed over to Modi as a "thankyou gesture", he said. Goel, the convenor of arrangements at the venue, said more than two lakh people are expected to attend the rally. Cutouts of PM Modi, BJP president and Home Minister Amit Shah and working president J P Nadda have been put up around the Ramlila Maidan.

"This rally will also symbolise that after winning seven Lok Sabha seats in Delhi, the BJP is in full-swing in preparations for the Delhi Legislative Assembly elections as well," Goel said.

He said LED screens have been installed at several places. Outside the premises, people from Uttarakhand, Rajasthan, Jammu and Kashmir, Bihar and Uttar Pradesh will be playing 'dhol'. The BJP has majorly focussed on unauthorised colonies for the rally because this will become a big issue in Delhi elections, expected early next year. A tableau of unauthorised colony has been installed too.

CAA guarantees security to each citizen of country: Adityanath