Net collection of both direct and indirect taxes has seen a significant decline; lower tax collection means the Centre may fail to meet its fiscal deficit target of 3.3 per cent of the GDP All these numbers indicate a persistent slowdown in the economy. 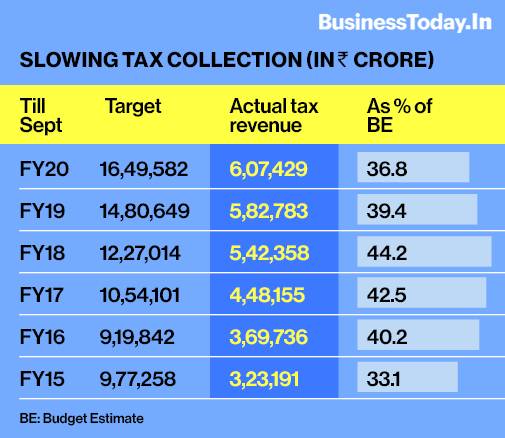 The net collection of both direct and indirect taxes has seen a significant decline. The government has collected total corporate tax of Rs 2.49 lakh crore this year so far, which is less than one-third of its full-year target of Rs 7.66 lakh crore. Finance Minister Nirmala Sitharaman's announcement of over 7 per cent reduction in corporate tax to 25 per cent would lead to further fall in tax revenue collection.

Personal tax collection till September 30 is over one third (Rs 2.13 lakh crore) of the total target of Rs 5.69 lakh crore for the fiscal year. The CGST (central goods and services tax) so far seems to be in sync -- at Rs 2.47 lakh crore -- with the government's full-year estimate of Rs 5.26 lakh crore.

All these numbers indicate a persistent slowdown in the economy. In the first quarter of FY20, GDP growth slumped to a six-year low of 5 per cent. Private consumption decelerated to an 18-quarter low of 3.1 per cent in the June quarter.