Nobel laureate Esther Duflo said that slow growth in Indian economy does not mean India is going to become poor, as it's still growing. 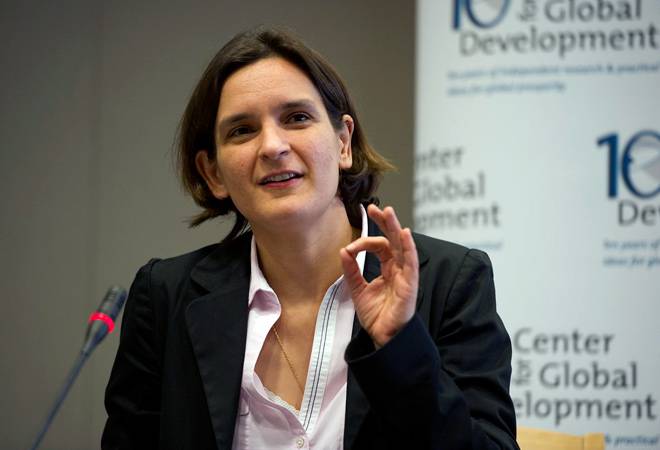 In an exclusive interview with Business Today, Duflo, who shared this year's Nobel Prize for Economic Sciences with Abhijit Banerjee and Michael Kremer "for their experimental approach to alleviating global poverty" said a better solution to the problem will be to increase public expenditure and make it effective enough to de-risk the poor from the perils of economic slowdown and resultant loss of livelihood.

"India should not worry about the slowdown in its economic growth. The slowdown is probably caused by two phenomena - worldwide circumstances and an expected impact of India's fast growth in recent years. While India cannot do anything about global conditions, the country's fast pace of growth for many years since the middle of the 1980s was the result of a lot of catching up, which was great. Now that all the low hanging fruits have been picked up, growth rate is naturally expected to slowdown", she said.

According to Duflo, slow growth in Indian economy does not mean India is going to become poor, as it's still growing. "The implication of the slowdown is that one shouldn't be too stressed out about growth per se. One shouldn't take too many radical measures to have growth come back. I think you guys need to find a way to say okay, growth is going to slow down, it's going to come at a slower rate, but we need to make sure that the standard of living of the people are up, particularly that of the poor", she said.

Duflo, the Abdul Latif Jameel Professor of Poverty Alleviation and Development Economics in the Department of Economics at the Massachusetts Institute of Technology, USA, pointed out that India should just manage the consequences without being too concerned about growth. "India should not raise the taxes now as it could have a multiplier effect. Slashing taxes is probably a bit risky because if you slash taxes then where will the money that you need to spend on public expenditure come from? Cutting public expenditure in the middle of a crisis is not a good idea. So that's why I wouldn't raise taxes today and I wouldn't slash it either", she said.

Duflo does not see any quick solution to the problem. Her new book Good Economics for Hard Times, co-authored with Abhjijit Banerjee says that when the growth goes down, it is particularly important to see how effectively the existing resources are utilised. "It's not just about public expenditure, it's also increasing its effectiveness. Universal Basic Income is interesting as a concept, and could be tried out. If you're poor, you're always close to some disaster. So you are extremely reluctant to undertake any risky activity. And because you are not attending any risky activity, you are less productive. So what the basic income does is give people the assurance. That kind of security, I think, will give people the confidence to do new things to improve their lives. I think we should give it a try and experiment, it might work", she says.

Dulfo is the co-founder and co-director of the Abdul Latif Jameel Poverty Action Lab (J-PAL). As a researcher, she seeks to understand the economic lives of the poor, with the aim to help design and evaluate social policies.