The WEF said that India ranked below 100 on five pillars, and featured in the top 50 of just four pillars. The report also said that India was only above Brazil, which ranked 71st, among BRICS nations 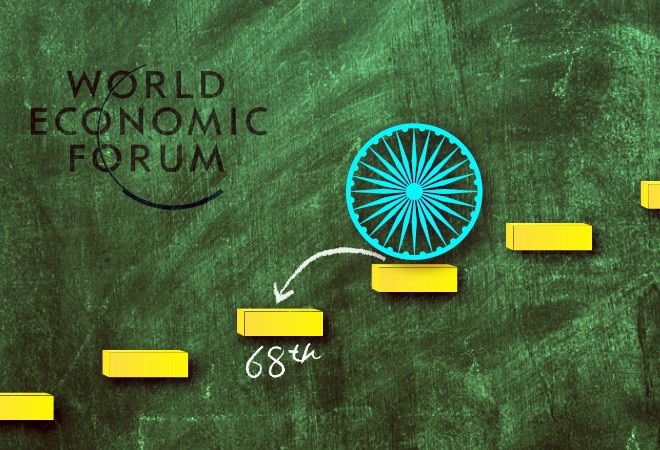 India has slipped 10 places to the 68th position in the global competitive index on account of progress made by several countries ranked close to India. In the Global Competitiveness Index Report 2019 by the World Economic Forum, Singapore overtook the United States to become the most competitive country. Hong Kong gained four places to reach the third position.

"India ranks 68th, down 10 places in 2019. The drop is only partly the consequence of a relatively small decline in score (61.4, -0.7 points), but also, and more significantly, the progress made by several countries ranked close to India," the report said.

The Global Competitiveness Index Report surveyed 141 nations on 103 indicators categorised under 12 broad themes, or pillars. The WEF said that India ranked below 100 on five pillars, and featured in the top 50 of just four pillars. The report also said that India was only above Brazil, which ranked 71st, among BRICS nations.

The WEF study, however, noted that India ranks high on macroeconomic stability and market size, achieving 43rd and third ranks, respectively. The financial sector of India is relatively deep and stable (40th rank), despite the high delinquency rate, reaching up to 10 per cent of the loan portfolio, it further said. This affected the soundness of the country's banking system, the Global Competitiveness Index Report added.

The WEF said that India performed well in terms of innovation, well ahead of most emerging economies and on par with several advanced economies. This contrasted with major shortcomings in some of the basic enablers of competitiveness, the report pointed out.

Adoption of information and communications technology (ICT) across India is limited, but has shown significant improvement in the past two years, the WEF said in its competitiveness report.

Governance in India is a mixed bag, the WEF report said, with transport and electricity infrastructures improving substantially over the past two years, although from a low base. India is also ranked high at 15th place in terms of corporate governance, while it is ranked second globally for shareholder governance, the WEF study showed. Electrification rate was almost 90 per cent in 2017, up 7 percentage points in comparison to 2015. India is ranked third for renewable energy regulation in the WEF survey.

"At the same time, health conditions remain poor, as reflected in low healthy life expectancy, which is one of the shortest outside Africa and significantly below the South Asian average," the competitiveness report added.

The WEF report also pointed out that India needs to improve its skills base. It further said that product market efficiency was undermined by a lack of trade openness. The WEF said that labour market was characterised by a lack of worker rights' protection and insufficiently developed active labour market policies. The participation of women in the workforce also remained critically low, it further said, as the ratio of female workers to male workers was at 0.26.

Not only sports but women can take charge for its promotion as well: Nita Ambani