Why Bangladeshis will soon be richer than Indians International Monetary Fund (IMF) expects India to add about $1.4 trillion to its economy or Gross Domestic Product (GDP) over the next five years. By comparison, the country's much smaller neighbour Bangladesh is estimated to add just $171 billion to its GDP during the same period. However, thanks to India's huge population and persisting economic challenges, Bangladesh may have a higher per capita GDP than India in 2020 and also in 2025, a distinction it is expected to achieve for the first time.

IMF estimates that the per capita GDP (the country's GDP in national currency converted to US dollars and then divided by the total population) of India will increase from $1,877 in 2020 to $2,729 in 2025, while Bangladesh's per capita GDP, $1,888 in 2020, will rise to $2,756 by 2025. Statistically speaking, Bangladesh will be a notch richer than India this year, as well as five years later. The data is worrisome for two reasons. First, it shows that India is slipping below Bangladesh in 2020 per capita GDP due to a double-digit contraction in India's economy (-10.3 per cent growth in GDP as against 3.8 per cent GDP growth of Bangladesh), indicating the severe hit India has taken due to COVID-19, unlike its neighbour. Second, even after five years, India's economic growth is unlikely to catch up with the pace of Bangladesh, which means the continuation of the troubles in the near future too. 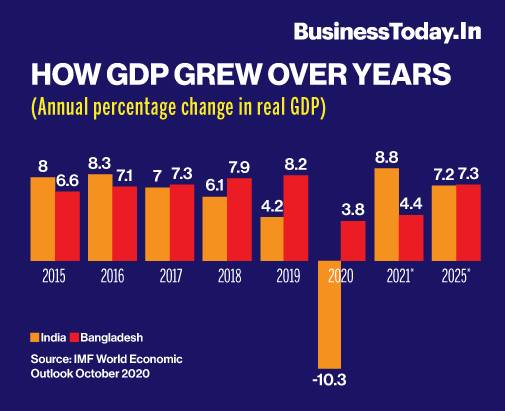 The trends charted by the IMF in its latest World Economic Outlook (WEO) October 2020, are clear. India's GDP growth has been consistently slowing down since 2016, and has plunged to negative this year. On the contrary, Bangladesh has been growing steadily since 2015. This year's sudden fall in growth is a COVID-18 aberration.

Due to the same reason, post-COVID pick-up of Indian economy is unlikely to be as smooth as that of Bangladesh. IMF estimates 7.2 per cent growth in Indian economy in 2025. Bangladesh is expected to grow by 7.3 per cent. The growth in per capita GDP is more striking. In 2015, India's per capita GDP was $1,606 as against $1,221 of Bangladesh. India's dominance continued till 2019, at $2,098 as against Bangladesh's $1,816. COVID-19 has toppled the balance, and IMF estimates the per capita GDP of both countries to remain very close, with fractional upper hand this side or the other for the next five years.

The IMF report states the obvious reason for the sharp fall in economic growth as COVID-19. "By late September, the number of confirmed infections worldwide exceeded 33 million, with over a million deaths- up from more than 7 million infections and 400,000 deaths at the time of the June 2020 WEO Update. Confirmed cases rose dramatically in the United States, Latin America, India, and South Africa," it said.

WEO October report also points out that "high-frequency indicators suggest a strong, albeit partial, rebound inactivity in the third quarter, after the trough in the second quarter". "However, momentum going into the fourth quarter appears to be slowing. Business surveys of purchasing managers show firms in the United States, euro area, China, and Brazil, for example, expanded output successively in July and August compared with the previous month, whereas the opposite was true elsewhere (for instance, in India, Japan, and Korea). For September, these indicators point to stronger activity in manufacturing but some setback for services, most likely reflecting the increase in infections."

The report says that for many emerging market and developing economies excluding China, prospects continue to remain precarious. "This reflects a combination of factors: the continuing spread of the pandemic and overwhelmed health care systems; the greater importance of severely affected sectors, such as tourism; and the greater dependence on external finance, including remittances... Revisions to the forecast are particularly large for India, where GDP contracted much more severely than expected in the second quarter. As a result, the economy is projected to contract by 10.3 percent in 2020, before rebounding by 8.8 percent in 2021," it says.

While Bangladesh is also COVID-19 hit, its economy managed to fare better because it wasn't in as bad a state as that of India in the first place. Exports had not dipped the way it did in India. Investments had not stagnated as it did in India. The numbers are for all to see.

Only standard loan accounts as of March 1 can be recast under pandemic scheme: RBI