Why petrol, diesel prices may rise after Lok Sabha elections

Market experts expect OMCs to increase petrol and diesel prices between Rs 3-5 per litre in phases after Lok Sabha elections; most oil PSUs are possibly facing losses due to holding off higher crude prices 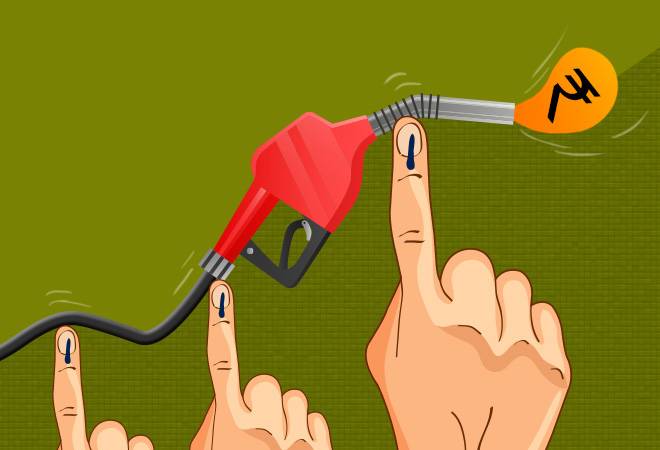 Customers may have to deal with a daily hike after May 19, when the last phase of elections will be held.

Fuel prices may rise sharply as soon as elections are over in India given the spike in crude prices in the international market. Oil Marketing Companies (OMCs), which have not fiddled with the prices much in the past month, are likely to pass the burden to the consumers. The oil PSUs may hike the retail price of petrol and diesel by Rs 3-5 per litre, but in phases, according to industry experts.

The oil companies sold the two transport fuels at almost Rs 5 per litre and at Rs 3 per litre discount in March and April when average crude oil price in India hit a high of about USD 67 per barrel and USD 71 per barrel respectively, agency IANS quoted government sources.

If we look at past trend, petrol should be priced at over Rs 78 a litre and diesel over Rs 70 a litre at the given level of crude prices (of over $70 a barrel). As of May 7, petrol and diesel prices in Delhi remained at Rs 73 and  Rs 66.66, respectively. They should have gone up or at least matched the rise in global crude prices. This indicates that oil marketing companies are possibly facing losses due to holding off higher crude prices.

Sri Paravaikkarasu, director for Asia oil at Singapore-based consultancy FGE told Reuters last week that retail prices of gasoline and gasoil prices would have been up 6%, or about Rs 4, higher had they had been allowed to rise in line with global prices.

ALSO READ:BT Buzz: Nobody is batting for 'dirty' diesel anymore

OMCs in the past too have refrained from increasing oil prices during elections. They had initiated a 19-day price freeze on petrol and diesel ahead of the Karnataka polls in May, 2018, despite international fuel prices going up by nearly $5 a barrel in the interim period. But the buck was rapidly passed on to customers immediately after the hiatus ended - over 16-straight days of hikes post May 14, petrol price jumped up by Rs 3.8 per litre and diesel by Rs 3.38.

According to reports, IOC had also imposed a freeze on petrol and diesel prices between January 16, 2017, and April 1, 2017, back when the company followed fortnightly revision of fuel prices. That period had seen assembly elections in five states, Punjab, Goa, Uttarakhand, Uttar Pradesh and Manipur.

One of the first challenges facing India's new government will be surging oil prices. Although Brent crude, the global oil benchmark, has been dipping since late April - down about 7% - on supply side optimism, the weeks before that had seen prices jump about 12%. While Indian consumers have not yet had to bear the brunt of this uptick, compounded pain is likely on the cards.

Although state-controlled fuel suppliers and retailers have been tight-lipped about the reason for delaying price increases, the Opposition is already making noises about it. According to the Congress party, the Modi's government is violating its own policy of daily price revision by advising the state oil companies to hold prices steady. "The government should cut fuel taxes otherwise consumers will have to pay much higher oil prices once the elections are over," Akhilesh Pratap Singh, a senior leader of the Congress party, told the agency.

No PM has ever stooped as low as Modi: Over 200 DU teachers slam PM's remark on Rajiv Gandhi