Wistron on Saturday, December 19, admitted some workers at the Karnataka plant had not been paid properly or on time and removed its Vice-President who oversees its India business 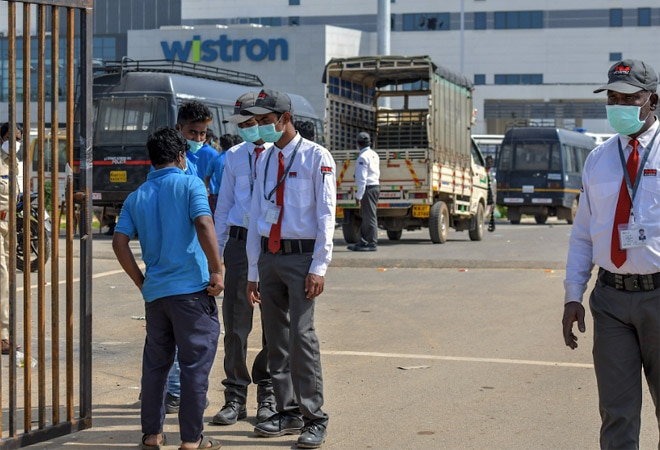 Apple, as a result, placed Wistron on probation and said that it would not award Wistron any new business until it addressed the way workers were treated at its India plant

The manufacturing plant run by Apple supplier Wistron in Karnataka's Narasapura which was vandalised by angry workers last week had been abusing several labour laws, according to preliminary findings by the state's labour department. The investigation carried out by the Department of Factories, Boilers, Industrial Safety and Health revealed the Taiwanese company and Apple's vendors were in breach of Apple's supplier code of conduct that led to payment lapses and delays for the employees, causing violence at the plant that resulted in severe damage.

The report also suggested that Wistron had failed to hire professionals in its human resources department with sound knowledge of India's labour laws.

Karnataka government said it would help Wistron re-start operations and address workers' concerns. Meanwhile, trade unions have criticised the state for 'going soft' on the company and failing to empathise with staff who worked in 'sweatshop-like conditions'.

On December 12, Wistron's angry workers smashed company's property, equipment and iPhones at the plant over unpaid wages, costing millions of dollars in damage and forcing it to shut the site.

Apple, as a result, placed Wistron on probation and said that it would not award Wistron any new business until it addressed the way workers were treated at its India plant.

"We have placed Wistron on probation and they will not receive any new business from Apple until they complete corrective actions. Apple employees, along with independent auditors, will monitor their progress. Our main objective is to make sure all the workers are treated with dignity and respect and fully compensated promptly," Apple said in a statement.

The American tech giant also said that Wistron failed to implement proper working hour management processes which "led to payment delays for some workers in October and November".

Meanwhile, Apple is conducting an audit to find out whether Wistron violated supplier guidelines. It has also appointed independent auditors who, along with Apple employees, are looking into the matter.

Wistron on Saturday, December 19, admitted some workers at the Karnataka plant had not been paid properly or on time and removed its Vice-President who oversees its India business.

Here are the investigation's top findings:

1) Around 10,500 workers are employed in the Wistron in Karnataka factory, the HR department has not been adequately set up comprising personnel with sound knowledge of labour laws.

2) The repercussions of changing the working hours from 8 to 12 hours haven't been assessed.

3) Confusion among workers about their wages inclusive of overtime on account of the change in working hours, from 8-hour shift to 12-hour, has not been addressed by the HR personnel properly in line with the legal provisions.

4) Overtime hours and wages thereof in respect of 12-hour shift have not been clearly explained to the workers.

5) Faulty attendance system, which failed to correctly capture the attendance of workers, hasn't been addressed and has been continued for the past two months.

7) The practices in place concerning payment of wages and overtime work weren't in line with the provisions of law.

8) There was a wide gap between the practices in the factory and the statutory stipulations under the law about the period of work.

While speaking about the working conditions at the plant, Gangadhar, a Wistron employee, who went to work on the day of the violence, said, "I used to get just Rs 15,400 excluding PF ESI money. The shift starts at 6 am and we have to leave home at 3 am. After work, we would reach home at 10 pm. If we questioned the contractor for the pay shortage, he would blame the company and vice-versa. If we questioned the company, our identity cards would be confiscated. They would give trivial reasons for the pay cut and say it was due to problems with access card or attendance shortage."

Another Wistron employee, Uday, said, "If I came even one minute late from the canteen, they would not let me return to work. The work environment was terrible. Every month there used to be a shortage of Rs 4,000 - 5,000 in our salaries and they kept saying it will come in next month. There were dues for four months."

According to the initial police report, the violence at the factory broke out at around 6.30 am when a group of protesting workers entered the company premises illegally and damaged a few documents related to labours. They later destroyed the doors and windows and allegedly looted iPhones and laptops.

Economy coming back on track since July-September quarter: Anurag Thakur

Farmers' agitation: Will decide next plan of action in 2-3 days, say protesting unions