The biggest challenge RBI's youngest governor ever faces today is that of very high expectations from him on the part of both the government and the markets. 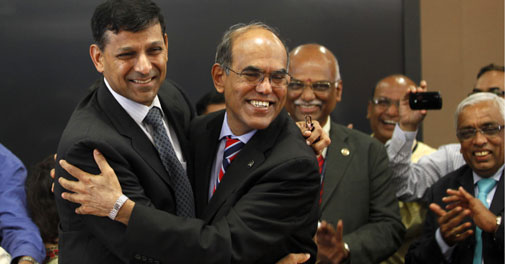 Anand Adhikari
A public sector banker in Mumbai neatly described the challenge that awaits Raghuram Rajan, who took over as the 23rd governor of the Reserve Bank of India (RBI) on Wednesday. He said Rajan had a patient waiting, who needed an urgent cure, "an Asian tiger that is now wounded," as he put it.

But Rajan is no spin doctor with an easy prescription for India's ailing economy.

The country's GDP growth rate has almost halved in the last three years. There is a crisis of confidence and the government has no credibility. Rajan, 50, knows his limitations of his new position.

"There is no magic wand to pull the country instantly out of the challenges faced by it," the noted economist has repeatedly said.

But it is because the challenges are huge that Rajan was chosen for the position in the first place. He was among the very few who had warned against the exotic financial products US banks were peddling well before the sub-prime crisis of 2008/09, which brought on the global downturn, struck.

His appointment has the stamp of approval of Prime Minister Manmohan Singh himself. A parallel can even be drawn between the circumstances in which Manmohan Singh became finance minister in 1991 and the ones in which Rajan has been made RBI governor.

Five years ago, Manmohan Singh brought Rajan back from the US as an honorary economic advisor and asked him to head a high level committee on financial reforms. Last year, Rajan was appointed as chief economic advisor to the finance ministry under P Chidambaram.

The biggest challenge the youngest governor the RBI has ever had faces today is that of very high expectations from him on the part of both the government and the markets.

Rajan is inheriting an economy, which has slipped to a decade low 5 per cent growth. The downslide is expected to continue - GDP growth was at 4.4 per cent in the first quarter of 2013/14. Wholesale price index (WPI) inflation is again accelerating, and was at 5.79 per cent in July this year. Consumer price index (CPI) inflation is hovering in the double digits with food inflation stubbornly high. The danger of inflation passing through the depreciating currency, as well as that of higher crude oil prices (thanks to the Syrian crisis) looms large.

Rajan has a tough task of balancing growth and inflation.

"Rajan is well aware of these limiting factors and will hope that the government gives a patient hearing to his advice," says Ananda Bhoumik, Senior Director at India Ratings & Research. "Till then, he may have to switch on the 'fasten seatbelts' sign as emerging economies grapple with receding external liquidity."

Rajan will have to keep an eye on the signals coming from the US Federal Reserve on quantitative easing (QE), which the US had resorted to in order to save its economy from recession, but now intends to gradually roll back. Under the QE programme, the central bank pumped in money in exchange of bonds. This money has found its way into emerging markets like India in the form of equity and debt investments.

A QE withdrawal means a new headache for Rajan as liquidity will get tightened and interest rates will harden in the US. That actually means dollar money flowing back to the US. The QE withdrawal will have implications on the Indian currency value against the US dollar.

What could also compound Rajan's problem is the possible downgrade from global credit rating agencies before the next general election in May/June 2014. The Food Security Bill, with its huge subsidy outgo, could be a trigger as well for rating agencies to re-evaluate India's rating. S&P has been running a negative outlook on India while the other two rating agencies-Moody's and Fitch - have put India's outlook at 'stable'.

There is a likelihood of Rajan reversing the tight monetary policy stance adopted by his predecessor D. Subbarao. Last month, Chidambaram in a debate in Rajya Sabha said that the RBI must focus on growth and employment. The Prime Minister, too, has called for fresh thinking on monetary policy in a globalised environment. The hints are clear: price stability shouldn't be the only objective of the central bank.

There are also challenges awaiting Rajan in the banking sector where non-performing assets and debt restructuring cases are on the rise. Rajan has a big role to play in re-shaping the Indian economy, but it will take time. The incumbent government which has appointed him doesn't have the best of chances of returning to power next year. And no one knows the economic agenda of the other parties.

Rajan surely has a lot of balancing to do in his three year term.

How will history remember D. Subbarao?