Coronavirus outbreak: In the South Korean city of Daegu, malls and movie theaters were empty and the usually bustling downtown streets were quiet in scenes one resident likened to a 'disaster movie'. 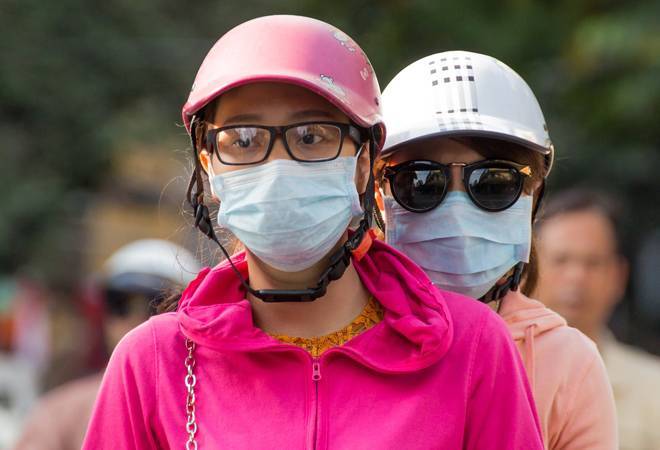 Coronavirus fears spread to South Korea on Thursday where the mayor of the country's fourth-largest city urged residents to stay indoors after a spike in infections linked to a church congregation, while China reported a sharp drop in new cases. In the South Korean city of Daegu malls and movie theaters were empty and the usually bustling downtown streets were quiet in scenes one resident likened in comments posted on social media to a "disaster movie".

Daegu Mayor Kwon Young-jin asked the city's 2.5 million residents to stay indoors after 23 new coronavirus infections were traced to church services in Daegu attended by a woman who later tested positive for the pathogen. At least 90 of more than 1,000 other people who attended the church services were showing symptoms, officials said, in what Korea's Centers for Disease Control and Prevention (KCDC) described as a "super-spreading event".

The situation was "very grave", South Korean Vice Health Minister Kim Kang-lip said at a separate briefing. South Korea now has 82 confirmed cases of the flu-like virus that emerged for China late last year and has now claimed more than 2,100 lives. Japanese media on Thursday reported the deaths of two elderly passengers from the quarantined Diamond Princess cruise ship anchored off Yokohama, the biggest cluster of infection outside mainland China with more than 620 cases.

A second group of about 600 Japanese and foreign passengers from the Diamond Princess was set to disembark on Thursday, after the first batch were released from quarantine a day earlier. The ship was carrying about 3,700 people when quarantined on Feb. 3. Hundreds of people who left the ship on Wednesday were placed in quarantine again in their home countries, with Australia and Hong Kong putting their returned citizens in supervised isolation for another two weeks.

Passengers arriving in Hong Kong were taken straight into quarantine at a new public housing estate. A contingent of Australian evacuees were placed in quarantine at an old mining camp outside Darwin in the country's far north. Two people died of the disease in Iran on Wednesday, Iranian officials said, bringing the death toll outside mainland China to eight. If the reported deaths on the quarantined ship are confirmed the toll outside mainland China would stand at 10, according to a Reuters tally based on official statements.

China's Hubei province, which accounts for the vast majority of cases, reported a sharp drop in new infections after it stopped diagnosing people using chest X-rays and counted only those who tested positive for genetic traces of the coronavirus. Hubei reported 349 new confirmed cases, down from 1,693 a day earlier and the lowest since Jan. 25. The death toll in the province rose by 108, bringing the total in China to over 2,100 deaths and 74,500 cases. Excluding Hubei, the number of new confirmed cases in mainland China fell for the 16th consecutive day to 45.

While the numbers suggest a downward trend, scientists in China who studied nose and throat swabs from 18 patients say the newly identified virus could be more contagious than previously thought. The preliminary findings published on Wednesday in the New England Journal of Medicine show the virus behaves much more like influenza than other closely related viruses, and can be passed on by people before they show symptoms.

"If confirmed, this is very important," said Dr. Gregory Poland, a sinologist and vaccine researcher with the Mayo Clinic in Rochester, Minnesota, who was not involved with the study.

China, the world's second largest economy, cut its benchmark lending rate on Thursday in an effort to lower costs for struggling businesses, as the epidemic upends global supply chains and causes widespread disruptions.

With China's Hubei province, home to some 60 million people, in virtual lockdown, strict limits on movement in several major Chinese cities, and bans on travel to and from the mainland, economists expect China's economy to take a short-term hit from the epidemic. Financial leaders of the world's 20 largest economies (G20) said the coronavirus epidemic was a downside risk for the global economy, according to a draft communique prepared for a meeting on Feb. 22-23.

The disruption to Chinese industrial output is exacerbating costs on businesses hit by the U.S.-China trade war, as companies grapple with a myriad of virus-related restrictions that differ by province, city and district. Apple Inc (AAPL.O) on Monday rescinded a quarterly sales target due production difficulties in China, while carmakers including Hyundai Motor Co (005380.KS) and Nissan Motor Co (7201.T) are having trouble finding parts.

Australia's Qantas Airways Ltd (QAN.AX) said on Thursday it will ground the equivalent of 18 planes, freeze recruitment and ask its 30,000 staff to use up annual leave as it grapples with falling demand in Asia due to the epidemic. About 80% of scheduled airline capacity to, from and within China has been cut this week, with Chinese airlines the hardest hit.