China is both the biggest manufacturer and the biggest market for cars globally. But the car sales fell in 2018 by about six per cent to 22.7 million units for the first time in 20 years. 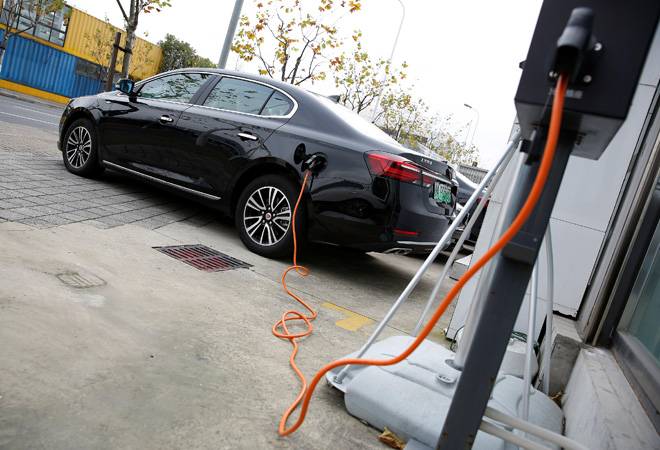 "He mentioned that for India's ambitious objective of achieving electric mobility by 2030, we see very substantive role for the Chinese EV players," a press release from the Indian Embassy here said on Sunday.

China EV100, a private electric vehicle association of over 200 leading Chinese electric mobility industries, is organising the 5th China EV100 Forum in Beijing. The government as well as industry representatives from all over the world attended the event.

China is both the biggest manufacturer and the biggest market for cars globally. But the car sales fell in 2018 by about six per cent to 22.7 million units for the first time in 20 years, sending shock waves across the industry.

The drop is largely attributed to the continued slowdown of the Chinese economy, stringent measures to restrict new car sales to cut automobile pollution and the ongoing trade war with the US.

The most recent figures show that New Energy Vehicles (NEVs), a category which includes electric and hybrid models, has defied trend of slowdown, growing substantially over the past year, a recent BBC report said.

China's NEV market made a major gain this month with Elon Musk, the CEO of US electric carmaker Tesla, on Monday laying foundation to set up USD seven billion plant in Shanghai. Tesla became the first to benefit from a new C policy allowing foreign carmakers to set up wholly-owned subsidiaries in China.

The new plant, Tesla's first outside the US, is located at a high-end manufacturing park in the southeast harbour of Shanghai. It is designed with an annual capacity of five lakh electric cars.

In his meeting with Chen, Srivatsava said that given the market size of India and China together, there is huge cooperation potential for EV industries of both countries.

He said EV industries of both countries should have more interaction and proposed to establish a formal interaction mechanism between an Indian EV Industry association, supported by NITI Aayog, and China EV100, which can meet periodically.

He proposed to organise an industry meet of players of two sides in the first half of this year in Beijing or a suitable venue to explore cooperation possibilities between EV Industries of two countries, the release said.

"Chen mentioned that India is an important country for Chinese EV players and he welcomes Chinese industries participation and investment in Indian EV market," it said.

Earlier, Srivastava spoke about the Indian government's policy for promotion of electric mobility, current state of play and future roadmap.

Addressing the forum, he said EV sales were expected to be 30 per cent of total sales in 2030 with 25.36 million EVs and 59.17 million (Internal Combustion Engines) ICEs.

The total automobile sales in India were expected to 84.53 million in 2030.

He mentioned that India is committed to global environmental commitments, and will encourage development and adoption of clean energy and new energy transportation.

Leading Indian auto-makers such as Maruti Suzuki, Tata, TVS, and industry associations such as Society of Indian Automobile Manufacturers (SIAM) and Automotive Component Manufacturers Association of India (ACMA) took part in the event.