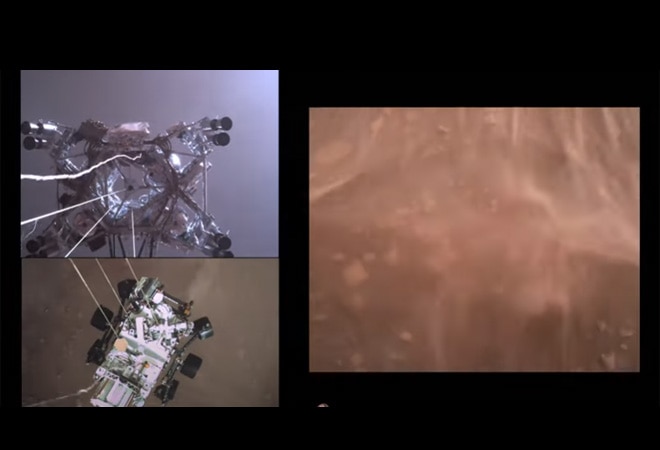 After this, it shows the touchdown of the rover in Jerezo crater in a cloud of dust on Mars (Image: NASA official YouTube channel)

US space agency National Aeronautics and Space Administration (NASA) released the first video of the landing of the Perseverance Rover on Mars. The 3-minute-25-second-long video shows the heat shield protecting the rover dropping away and the deployment of a red-and-white parachute.

After this, it shows the touchdown of the rover in Jerezo crater in a cloud of dust on Mars. In this video, you can also hear a faint crackling recording of wind captured by the rover.

Your front-row seat to my Mars landing is here. Watch how we did it.#CountdownToMarspic.twitter.com/Avv13dSVmQ

A microphone got botched up during the rover's descent on the red planet's surface but it, however, managed to capture audio once it landed.

Director of NASA Jet Propulsion Laboratory Micheal Watkins said, "We have taken everyone along with us on our journeys across the solar system...This is the first time we've actually been able to capture an event like the landing of a spacecraft on Mars."

"This is the first time we've actually been able to capture an event like the landing of a spacecraft on Mars."

Michael Watkins, director of @NASAJPL, explains the unprecedented nature of the video that @NASAPersevere captured during the #CountdownToMars: pic.twitter.com/eNvmnAznWL

NASA's associate administrator Thomas Zurbuchen told news agency AFP that Perseverance's descent is "the closest you can get to landing on Mars without putting on a pressure suit."

Perseverance became the fifth NASA rover to touch the surface of Mars almost seven months after its take-off. Before Perseverance, NASA rovers like Sojourner- twin rovers Spirit and Opportunity and Curiosity have touched the Martian surface.

The latest mission to Mars by NASA is worth $3 billion. In this mission, the car-sized, plutonium-powered Perseverance rover landed at the Jerezo crater on February 18, reaching NASA's smallest target so far-a 5-by-4 mile strip on an ancient river delta full of pits, cliffs, and rocks.

Also read: NASA shares picture of star which weighs as much as Mount Everest

Global oil prices rise by over $1 on slow US output restart; Brent reaches $65.30 per barrel