The 13th India-Japan annual summit will seek to review the progress in ties and deepen strategic dimension of the bilateral relationship between the two countries. 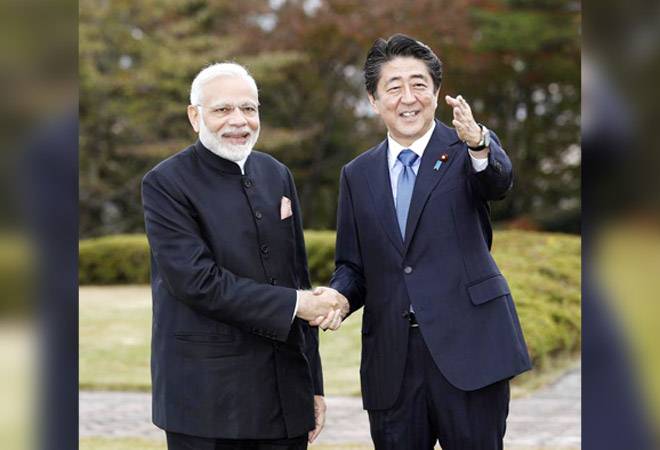 Prime Minister Narendra Modi and his Japanese counterpart Shinzo Abe held informal talks at a picturesque resort near Mount Fuji and visited a factory of industrial robot manufacturer on Sunday as they spent about eight hours together on the first-day of a two-day summit. Modi, who arrived in Japan last evening to attend the 13th India-Japan annual summit, has said the partnership between the two countries has been fundamentally transformed and it has been strengthened as a 'special strategic and global partnership'.

The two-day summit beginning Sunday will seek to review the progress in ties and deepen strategic dimension of the bilateral relationship. Modi was affectionately received by Abe on his arrival at the Hotel Mount Fuji in the scenic Yamanashi prefecture, west of Tokyo.

"Delighted to meet PM @AbeShinzo in the picturesque prefecture of Yamanashi," Modi tweeted. The two leaders "would be holding talks through the day on deepening India-Japan ties," Prime Minister Modi's office said.

The two leaders took a stroll in the garden following which Abe hosted a luncheon for Modi at the scenic resort by Mount Fuji. Modi presented Abe two handcrafted stone bowls and dhurries made from rose quartz and yellow quartz stone sourced from Rajasthan. A Jodhpuri wooden chest from Rajasthan with traditional work was also presented. The gifts were specially crafted on the occasion of Modi's visit to Japan.

After luncheon, both prime ministers visited the FANUC industrial facility, which specialises in automation. "Taking our cooperation to modern and advanced technologies. PM @narendramodi and PM @AbeShinzo visited the FANUC Corporation, one of the largest makers of industrial robots in the world in #Yamanashi, and toured the robotics and automation facilities," Ministry of External Affairs spokesperson Raveesh Kumar tweeted.

Prime Minister Modi was briefed on the various robotic and automation capabilities of FANUC, Ministry of External Affairs officials said. Both the leaders observed several illustrations of the working of industrial robots. At the motor assembly facility, they witnessed the assembling of a motor by a robot in 40 seconds, officials added. FANUC contributes to the manufacturing industry in Japan and other countries, including India, by promoting automation and efficiency in manufacturing.

Later in the evening, Abe in a special gesture hosted Modi at his personal villa near Lake Kawaguchi in Yamanashi for a private dinner. It is the first time that Abe has invited a foreign political leader to his holiday home in the village of Narusawa in the prefecture.

"Extremely grateful to PM @AbeShinzo for the warm reception at his home. I am truly honoured by this gesture. PM Abe also taught me the Japanese way of eating food using chopsticks!" Modi tweeted.

In September last year, Modi had hosted Abe in his home state of Gujarat. "Tete-a-tete in front of a fireplace. Japanese PM @AbeShinzo hosted PM @narendramodi at his personal villa near Lake Kawaguchi in #Yamanashi. PM Modi is the first foreign leader to be invited to the villa," Kumar tweeted.

After the dinner, the two leaders left for Tokyo by train. The two prime ministers spent about eight hours together, MEA officials said. Yamanashi, at a distance of around 110 kilometres from Tokyo, is surrounded by several mountains including Mount Fuji - the country's tallest peak at around 3,776 metres. They will hold a formal summit Monday in Tokyo, during which strengthening bilateral security and economic cooperation is expected to be high on the agenda.

Ahead of his departure from New Delhi, Modi described India and Japan as a "winning combination" and said the island nation was New Delhi's most trusted partner in its economic and technological modernisation. Modi said it will be his 12th meeting with Abe since he first visited Japan as prime minister in September 2014.

"The India-Japan partnership has been fundamentally transformed and it has been strengthened as a 'special strategic and global partnership'," Modi told the Kyodo News Friday. "There are no negatives but only opportunities in this relationship which are waiting to be seized," he added.

During the formal summit Monday, Modi will engage with Abe on a range of issues including defence and regional security. Besides bilateral issues, the two leaders are expected to deliberate on a range of regional and global issues including the situation in the Indo-Pacific region. It is said the prime minister's visit will reaffirm the traditional bonds of friendship between the two countries and strengthen their multi-faceted cooperation in diverse fields.

India is also hoping to have some kind of synergy or integration between Modi's Ayushman Bharat scheme, which is the largest medicare programme of its kind globally, and the Japanese programme which is called Asia Health and Wellbeing Initiative. Prime Minister Modi has said projects such as Mumbai-Ahmedabad High Speed Rail and Dedicated Freight Corridors reflected the high level and "strength of our economic engagement".

"Japan is also at the forefront of engaging in our national initiatives, such as 'Make in India', 'Skill India', 'Digital India', 'Start Up India'... Japanese investors have faith in India's economic future, which is marked with myriad opportunities," Modi said. Modi will also address the Indian community function in Tokyo and will attend a series of business events and address the business forum.