PM Modi meets Tim Cook, Sundar Pichai, other CEOs in US: Here's what he said

Prime Minister Narendra Modi met CEOs of top US companies on Sunday during his ongoing visit to the US. Prime Minister Modi urged the CEOs to invest in India and emphasised that his government has taken many reform measures for ease of doing business. 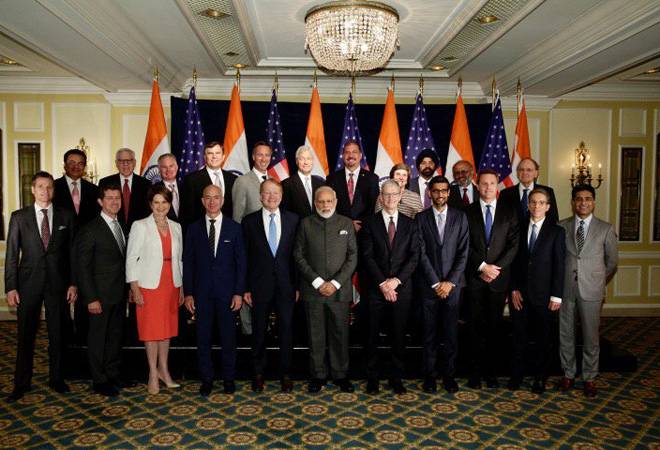 Prime Minister Narendra Modi met CEOs of top US companies on Sunday during his ongoing visit to the US. Prime Minister Modi urged the CEOs to invest in India and emphasised that his government has taken many reform measures for ease of doing business. Among the top CEOs present at the event were Apple chief Tim Cook and Google's Sunder Pichai. John Chambers from Cisco and Jeff Bezos of Amazon were also part of the round table interaction.

Modi said that his country had attracted the largest amount of foreign direct investment after several policies were implemented to make the atmosphere business-friendly. More than 7,000 reforms were made for "ease of (doing) business and minimum government, maximum governance," Modi said.

Meanwhile, the CEOs reportedly praised Prime Minister Narendra Modi's effort for taking India's economy towards a digital path through demonetisation. Indian officials present at the meeting said the CEOs expressed their interest to be partners in skill development and education initiatives in India. They also highlighted the social initiatives their companies were involved in India on issues such as women empowerment, digital technology, education and food processing. The CEOs also expressed support for 'Make in India', 'Digital India', 'Start Up India' and other flagship initiatives of the government.

Google CEO Sunder Pichai also praised the steps PM Modi had taken during his three-years in power and that his company was excited at the prospect of investing in India. He also said that the the US companies were looking forward to the historic reform in Indian tax system with the roll out of the GST.

"This shows India can take big decisions and implement them swiftly," he said.

Among other CEOs present at the meeting were Shantanu Narayen from Adobe, Ajay Banga from Mastercard, David Farr from Emerson, Doug McMillon from Walmart, and Punit Renjen from Deloitte Global, Jim Umpleby from Caterpillar, Alex Gorsky from Johnson and Johnson, Jamie Dimon from J P Morgan Chase, and Marillyn Hewson from Lockheed Martin. USIBC president Aghi was also present.

Many US companies have investment plans in India. Top companies such as Google, Amazon, Facebook and Apple see India as a market with huge potential. Sunder Pichai of Google, Mark Zuckerberg of Facebook and Time Cook of Apple have visited India in recent years to strategise investment options.

SBI chief's salary is nothing compared to counterparts in pvt banks