Separately, a group of at least 27 US state attorneys general launched a multi-state investigation of Volkswagen's representations to consumers about its diesel vehicles, and said it will send subpoenas to the automaker. 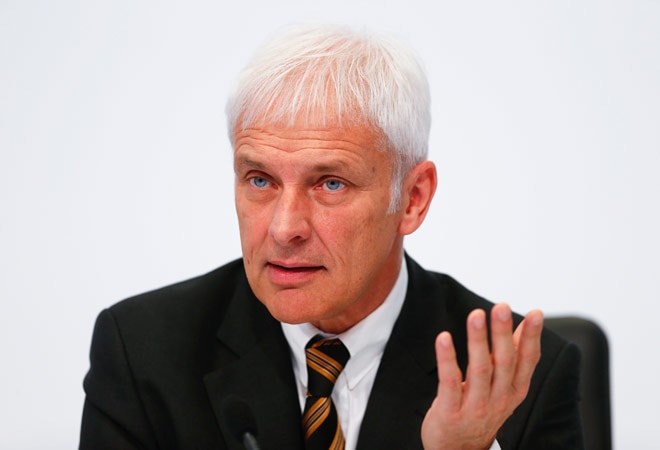 CEO of Porsche Matthias Mueller. Mueller, 62, has been widely tipped to succeed Martin Winterkorn, who quit on Wednesday, when the German carmaker's supervisory board meets on Friday. He will take responsibility for steering Volkswagen through the biggest business crisis in its 78-year history.

Volkswagen will name Matthias Mueller, the head of its Porsche sports car brand, as its chief executive, a source close to the matter said on Thursday, as the fallout from the US vehicle emissions test rigging scandal broadened.

Mueller, 62, has been widely tipped to succeed Martin Winterkorn , who quit on Wednesday, when the German carmaker's supervisory board meets on Friday. He will take responsibility for steering Volkswagen through the biggest business crisis in its 78-year history.

The crisis deepened on Thursday as officials in Europe and the United States stepped up their investigations.

"We have been informed that also in Europe, vehicles with 1.6 and 2.0 litre diesel engines are affected by the manipulations that are being talked about," Alexander Dobrindt told reporters, adding it was unclear how many vehicles in Europe were affected.

Dobrindt said Europe would agree on new emissions tests in coming months that should take place on roads, rather than in laboratories, and that random checks would be made on all manufacturers.

Separately, a group of at least 27 US state attorneys general launched a multi-state investigation of Volkswagen's representations to consumers about its diesel vehicles, and said it will send subpoenas to the automaker.

"I am furious that the world's leading car company wilfully took steps that polluted our environment and deceived consumers," Maryland Attorney General Brian Frosh said in a statement.

In Sacramento, California, that state's top air quality regulator said her agency is preparing a series of actions against Volkswagen in response to the company's admission that it cheated on tailpipe pollution tests. "Right now we are organizing ourselves for a major enforcement action," said Mary Nichols, head of the California Air Resources Board.

The state also intends to order a recall of Volkswagen diesel vehicles sold in the state with software that enabled the cars to pass the agency's emissions tests, but then emit far more pollution on the road.

Volkswagen has said 11 million cars globally had the software fitted, but it was not activated in the bulk of them. As well as the cost of regulatory fines and potentially refitting cars, Volkswagen faces criminal investigations and lawsuits from cheated customers and possibly shareholders.

More immediately, the new CEO will have to restore the confidence of customers and motor dealers, who have expressed frustration at a lack of information about how they will be affected by the scandal.

Mueller has a majority on the 20-member supervisory board, the source said. Volkswagen declined to comment.

The board will also dismiss the head of the company's US operations and top engineers at its Audi and Porsche brands, a senior source told Reuters, as it seeks a fresh start.

"He is a good choice even though he may be seen as a transitionary CEO until another internal candidate such as VW brand CEO (Herbert) Diess has earned their stripes," Arndt Ellinghorst, an analyst at Evercore ISI investment banking advisory firm, said of Mueller.

Mueller, who has worked for parts of the Volkswagen empire since the 1970s, is a management board member of Porsche SE and so is close to the Piech-Porsche family that controls Volkswagen through the holding company.

The company is under pressure to act decisively, with German Chancellor Angela Merkel urging it to quickly restore confidence in a business held up for generations as a paragon of German engineering prowess.

"There will be further personnel consequences in the next days and we are calling for those consequences," Volkswagen board member Olaf Lies told the Bavarian broadcasting network.

The research and development chiefs of Audi and Porsche, Ulrich Hackenberg and Wolfgang Hatz, will be removed by the supervisory board, as will Volkswagen's top executive in the United States, Michael Horn, the senior source told Reuters.

Hackenberg and Hatz had both held senior posts at VW in development, including of engines, before they switched to Audi and Porsche. They are among Volkswagen's top engineers.

Horn acknowledged this week that the company had "totally screwed up" by deceiving U.S. regulators about how much its diesel cars pollute.

The scandal has sent shockwaves through the car market, with manufacturers fearing a drop in demand for diesel cars and tougher regulations and customers worrying about the performance and re-sale value of their cars.

The European Commission urged all member states to investigate the use of so-called defeat devices by carmakers to cheat emissions tests and said there would be "zero tolerance" of any wrongdoing.

So far, no other carmaker has been found to have used the devices. German rival BMW said on Thursday it had not manipulated tests, after a magazine reported some of its diesel cars were found to exceed emissions standards.

Friday's board meeting had originally been due to extend the contract of Winterkorn and set out a new management structure.

Though Winterkorn oversaw a doubling in sales and a near tripling in profit during his eight-year reign, he faced criticism for Volkswagen's underperformance in the United States and for a micro-management style that critics say delayed model launches and hampered its ability to adapt to local markets.

Analysts said a new management structure, possibly more decentralised but also with a clearer system of checks, was all the more urgent, with top executives apparently unaware of the emissions test cheating despite a tight control on decisions.

Two sources close to the matter said Volkswagen would create a special position for the United States on its management board on Friday, with the head of its Skoda brand, Winfried Vahland, the favourite to get the job.

The new CEO will also need to improve communications with dealers and customers, with many frustrated that Volkswagen has yet to say which models and construction years are affected by the crisis and whether cars will have to be refitted.

Volkswagen said in a statement on its website it was working to answer these questions. "It goes without saying that we will take full responsibility and cover costs for the necessary arrangements and measures."

(Additional reporting by Reuters bureaus in Europe, Asia and Americas)