News
INDUSTRY
IT
Explained: How India's growing unicorns are posing attrition challenges to the IT industry

Explained: How India's growing unicorns are posing attrition challenges to the IT industry

India's IT industry may see 1 million resignations in 2021, with the attrition rate hovering between 22 to 23 per cent.

Despite clinching billion dollar deals from markets like the US and Europe and the growing demand, India's big and mid-cap IT firms have faced voluntary employee exits this year
Bismah Malik

India's $190 billion information technology (IT) industry had a successful revenue run since the Covid-19 pandemic struck, leveraging the acceleration in digital transformation by the global enterprises. Despite clinching billion dollar deals from markets like the US and Europe and the growing demand, India's big and mid-cap IT firms have faced voluntary employee exits this year and the problem, as per the industry experts, will persist throughout 2021. Various estimates by the hiring firm Team Lease suggest that the industry may see a double-digit attrition rate (22-23 per cent) in 2021, which works out to over 1 million resignations.

"We anticipate a 22-23 per cent attrition rate in 2021, which works out to 1 million resignations on a projected base of 4.6 million IT employees. The attrition rate of leading IT firms in India is now at an all-time high and companies are facing issues in executing large projects. With the onset of the pandemic, IT companies are now adapting to build newer business models and transformation projects," Siva Prasad Nanduri, vice president and business head, IT and staffing, Team Lease Digital told BusinessToday.in.

An analysis by brokerage firm Angel One Ltd shows that the attrition rates of some of the large IT service providers, including Tata Consultancy Services (TCS), Infosys, Wipro, and L&T Infotech, will be 8.9 per cent, 7.8 per cent, 11 per cent, and 13.5 per cent, respectively, for the September quarter (Q2, FY22).

Jyoti Roy, DVP- Equity Strategist, Angel One, points out that the Indian IT sector is in a multiyear growth phase given accelerated adoption of digital technologies for digital services due to the Covid- 19 pandemic.

"Due to this accelerated shift to digital technologies, there is a demand-supply mismatch in digital skills, with demand far outstripping the available pool of talent. As a result, there has been an increase in attrition rates for Indian IT companies. All the IT companies have reported an increase in attrition rate in Q1 FY22 after witnessing a decline in FY21. While companies are taking various initiatives like re-skilling employees, using sub-contractors, and increasing the intake of freshers, we believe that demand will outstrip supply for some time to come as a result of which attrition rates will remain elevated," Roy said. 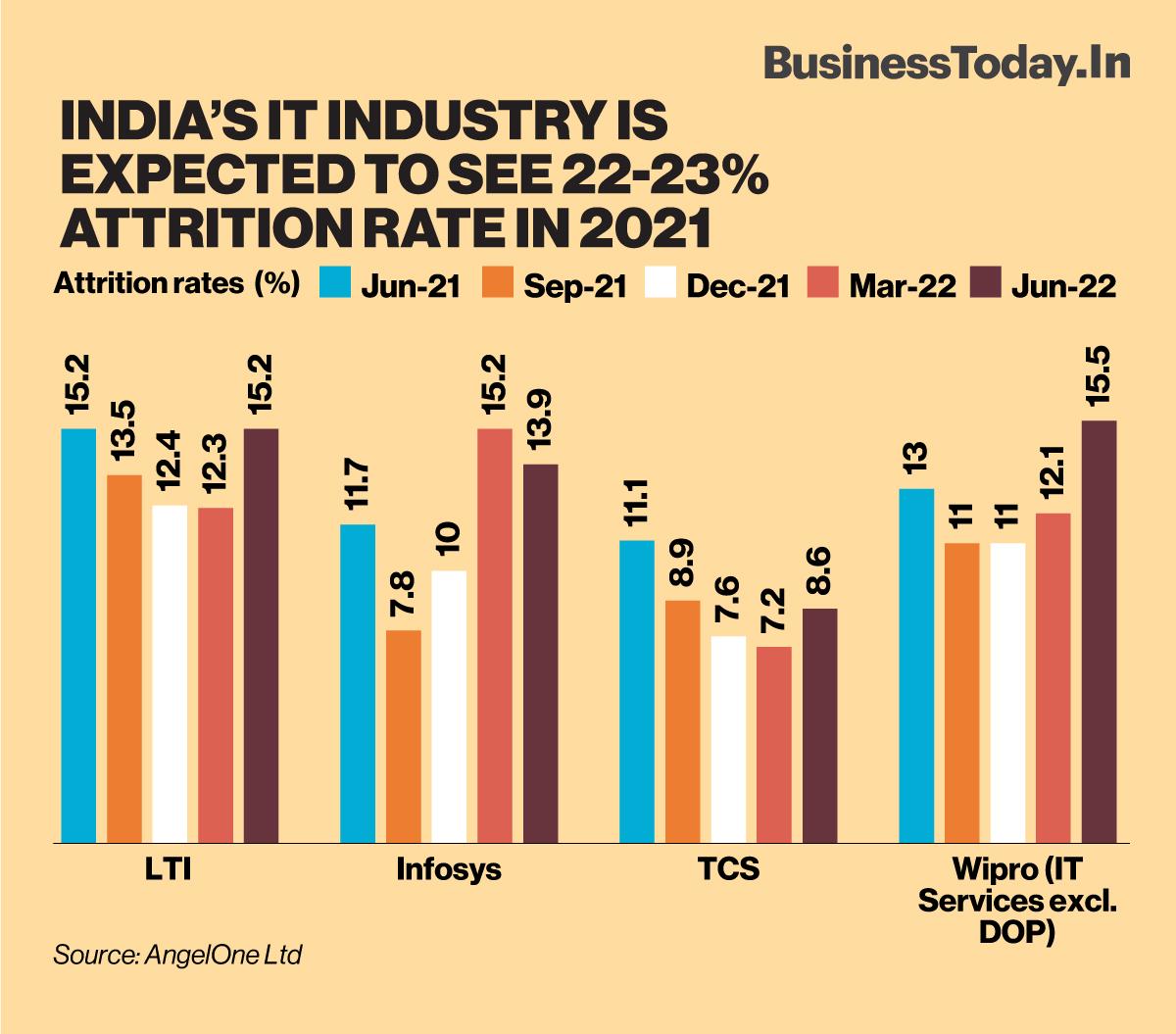 What is leading to employee exits?

India has minted 32 unicorns so far in 2021. That is a great news for everyone, except the big enterprises in IT companies. India's billion-dollar start-ups, according to analysts, are poaching the best talent from the large IT service companies with almost 30-50 per cent hike in remunerations, along with incentives like Employee Stock Option plans (ESOPS).

"This is reminiscent of the 1990s, when the large IT firms would provide lucrative offers to the employees with stock ownerships. Not only are the unicorns attractive because they offer better remunerations but the liquidity in the form of ESOPS is another major factor which is pulling the talent. Till now, none of the big enterprises have been able to match the salaries being offered by the big start-ups," Pareekh Jain, CEO, EIIRTrend and Parekh Consulting told BT.

Agrees Siva Prasad Nanduri of Team lease. "Unicorns have fuelled almost 100 per cent spurt in hiring over the last 1 year across IT functions . Hiring momentum is in a swing and as more tech start-ups are joining the unicorn club with ramped-up tech capabilities," he said.

Nanduri noted that with the increase in funding and expansion plans of tech start-ups the demand for tech professionals is going to increase. "By virtue of start-up companies continuing to enhance their offerings with competitive technology, acceleration in jobs and salaries would continue to rise. Companies are willing to pay as much as 30 per cent salary premium to attract targeted employees," he said.

In addition to unicorns, the Global In-house Centres (GICs) of international firms are being increasingly set up in India and they continue to poach the talent from the home-grown large enterprises.

"Companies, including Infosys, Wipro, HCL Tech, and TCS have stepped up their recruitment of the local workforce in the client geographies like the US, UK etc. This, coupled with stringent H1B visa approval process, has almost diminished the chances of Indian IT professionals travelling overseas. This used to be a great draw attracting the employees towards the big IT firms earlier. However, now the pandemic has almost shut those opportunities. The GICs are therefore the ideal places to work for many employees," Jain said.

Despite the rising attrition woes, India's IT firms are currently hiring tens and thousands of fresh engineering graduates from various universities, colleges in the country. However, analysts note that the companies will have to now allocate fixed budget towards recruiting, retaining talent.

Yeshab Giri, Chief Commercial Officer - Staffing & RT Professionals, Randstad India, said that the attrition this year has been around 20-25 per cent due to poaching by industry peers, availability of better growth opportunities, and incentives.

"Out of the total attrition in many of these companies, most of the attrition has been voluntary and employees have not been laid off. Having said that, the job market is undoubtedly opening up as we see some large IT giants announcing their plans to hire anywhere around 35,000-40,000 (which is a rise of 19 per cent w.r.t. to June 2021). As many companies are trying to offset the high cost of operations with their fluctuating operation cycles, we expect around 1 lakh freshers to be hired in this sector in FY22, with salaries of digitally skilled freshers being somewhere around 6-8 lakhs per annum, which is higher than the average pay of 3.5 lakhs," he said.

Data sourced from team lease indicated that the hiring rate for fresher's band of zero to three years saw the highest growth at 14 per cent, hiring for executives with experience in the range of four to seven years saw a 11 per cent year-on-year growth, whereas those in the experience band of eight to 12 years, 13-16 years, and over 16 years saw hiring rate grow by 9 per cent, 5 per cent, and 4 per cent respectively.