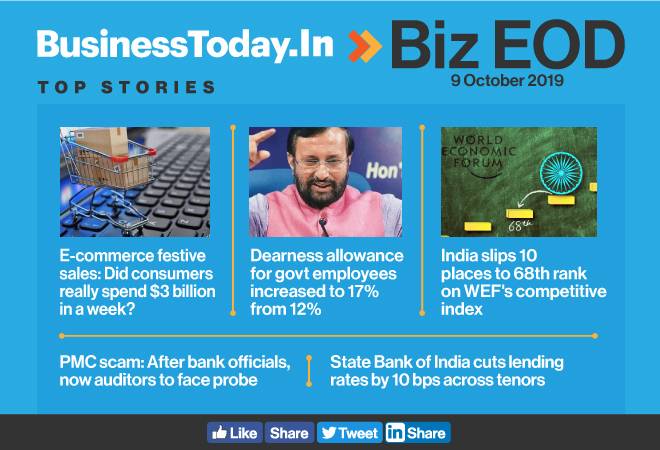 The central government employees have received a big bonanza ahead of Diwali as the Centre hiked the dearness allowance by 5 per cent to 17 per cent. India has slipped 10 places to the 68th position in the global competitive index on account of progress made by several countries ranked close to the nation. The probe into the Rs 4,355-crore scam at the PMC Bank is expected to expand further as the Economic Offences Wing of the Mumbai police may put auditors of the embattled realtor under the scanner. Read for more top stories from the world of business and economy:

Despite challenging macro conditions, the RedSeer report says, festive sales have seen a year-on-year growth of 30 per cent with significant share coming from customers in Tier-II cities

2. Diwali bonanza to govt employees! Dearness allowance increased to 17% from 12%

The WEF said that India ranked below 100 on five pillars, and featured in the top 50 of just four pillars. The report also said that India was only above Brazil, which ranked 71st, among BRICS nations

While the priority for the Economic Offences Wing of the Mumbai Police is to interrogate the arrested parties involved in the Rs 4,355 crore loan fraud at the Punjab and Maharashtra Co-operative (PMC) Bank, the buzz is that the findings of the auditors submitted in past financial reports may also be scrutinised as part of the investigations

One-year MCLR, to which all retail lending rates are pegged, will come down to 8.05 per cent from Thursday, compared to 8.15 per cent currently