An anonymous group, in the letter dated 22 September, claims it has voice recordings to prove its case; accuses tech giant CEO of not recognising full costs, hiding critical information from auditors, preventing them from highlighting issues in board meets and deflating profits in treasury

An anonymous employee group, named as 'Ethical Employees', in a complaint to the board of Infosys Limited and the US Securities and Exchange Commission (SEC), has written an explosive letter, accusing the domestic tech giant of indulging in 'unethical' practices to generate more profit and revenue. The group has also accused company Chief Executive Officer Salil Parekh of bypassing reviews and approvals to get bigger deals. These employees, in the letter dated 22 September 2019, claim they have voice recordings of the CEO and the CFO to prove their case.

Here are the allegations of the anonymous employee group

The group claims the company asked them not to "fully recognise costs like visa costs" to earn more profit. It added that when the auditor pointed it out, the issue was postponed by the company. "This quarter there is a lot of pressure to not recognise reversals of $50 million of upfront payment in FDP contract, which is against accounting practice," the group alleged.

The group alleged Infosys was hiding critical information from auditors and the company board. The group accused the company of asking them not to share such information with auditors. "In large contracts like Verizon, Intel and JVs in Japan, ABN Amro acquisition, revenue recognition matters are a force, which is not as per accounting standards," the letter stated. 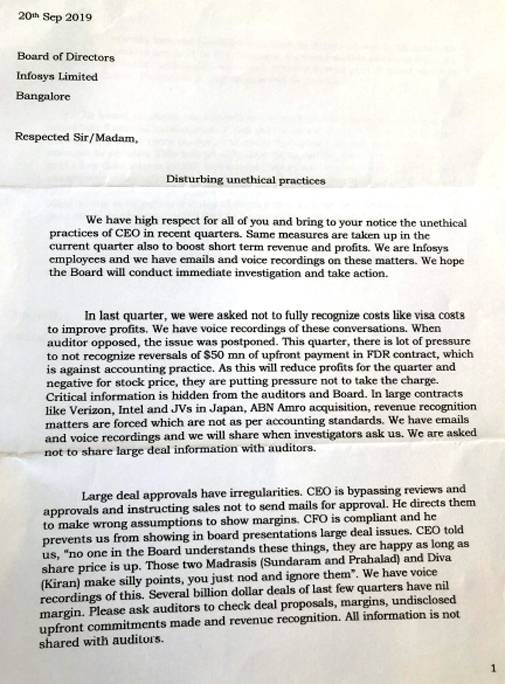 'Salil Parekh prevents us from highlighting issues in board meets'

They have accused Salil Parekh of "bypassing reviews and approvals and instructing sales department of the company not to send approval". "He directs them to make wrong assumptions to show margins. CFO is compliant and he prevents us from showing in board presentations large deal issues."

The group says the CEO had told them that "no one in the board understands these things, they are happy as long as the share price is up. Those two Madrasis (Sundaram and Prahalad) and Diva (Kiran) make silly points, you just nod and ignore them".

The group said the company has asked them not to make key disclosures in 20F and annual report and to share only good and incomplete information with investors and analysts. The group alleged that whosoever disagrees with these orders are "sidelined and many of them leave". The group said in the large finance team, important employees leave  due to pressure to make deals look good.

Also read: Why Infosys, Tech Mahindra, TCS, Wipro and other IT sector stocks fell amid the greatest bull run of Indian market