Arun Jaitley's absence will be conspicuous for his unique hydra-headed multi-tasking. Modi's unabashed supporter, opposition basher and principle trouble-shooter will be sorely missed until his return

While Jaitley's tenure would be remembered for relentless reforms, it will also be unfairly remembered for leaving a slower economy as a legacy than he inherited. Caricature by Chandan Kumar
Rajeev Dubey

As finance minister Arun Jaitley bows out of FinMin--until he recovers--he leaves a chequered legacy. On the positive side, his tenure was peppered with relentless reforms driven with boundless energy and enthusiasm such as GST, Insolvency & Bankruptcy Code, implementing Jan Dhan and then carrying through Aadhaa-based direct benefit transfer to as many as 55 schemes. The latter saved nearly Rs 1 lakh crore of leakage. 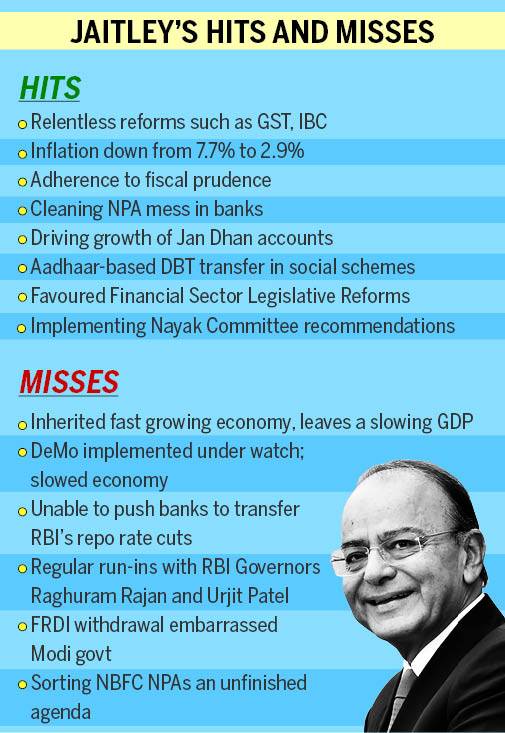 ALSO READ: Arun Jaitley opts out due to poor health, requests Modi not to assign any role in new govt

A key achievement of his tenure was adherence to fiscal discipline. Even though India never reached the target of 3 pc deficit despite extended deadlines, but Jaitley managed to keep deficit close at 3.4 pc in the interim Budget, 2019.

Jaitley had a significant contribution in inflation targeting-an achievement hailed by PM Modi himself. His push for setting up the Monetary Policy Committee at the Reserve Bank of India and its hawkish but vigilant stand against inflation brought down consumer price inflation from 7.72 pc at the beginning of his tenure to 2.92 pc now.

And last, but not the least, Jaitley's tenure will be remembered for cleaning up the NPA mess in the banking system. Though the task of sorting the NBFC mess remained one of his unfinished agendas. Thanks to his cross-party linkages, he was the key unifying force that helped implement GST in record time.

But such consensus building and persuasive ability failed when the government had to withdraw the Financial Resolution and Deposit Insurance (FRDI) Bill due to backlash against its 'bail in' clause which allowed funding failing banks with bank depositors' money. It turned out to be an embarrassment for the Modi government.

At the same time, Jaitley will be unfairly remembered for leaving a much slower economy as a legacy than he inherited. Annual GDP growth has slowed down from 8.17 pc 3 years ago to under 7 pc today. Quarterly GDP growth is now expected to be lower than China's 6.5 pc, which could take away the fastest growing economy tag from India if the slow trend continues. Unfairly-because it may not necessarily be Jaitley's doing. Economic growth has slowed for a variety of reasons, including the shocks emanating from DeMo and GST, besides US-China trade war, global slowdown and high commodity and crude rates.

His regular run-ins with the former RBI Governor Raghuram Rajan and his successor Urjit Patel will remain the unavoidable highlights of his illustrious tenure. Though the inability to push banks to transfer RBI's repo rate cuts to the consumer and industry will remain a major shortfall. High rates have choked up the economy and discouraged investments and borrowing at both the consumer and corporate end.

Yet, Arun Jaitley's absence will be conspicuous for his unique hydra-headed multi-tasking. Modi's unabashed supporter, opposition basher and principle trouble-shooter, Jaitley will be sorely missed until his return. For, there is only one Arun Jaitley!