Three quick policy measures can be taken to ensure income and credit flows: direct procurement, direct cash transfers to farmers as well as landless labourers and interest subvention through cash transfers and in KCC mode

The presence of jobless migrants adds an extra social and economic burden, for they have to be quarantined, fed and provided with healthcare
Prasanna Mohanty

The COVID-19 infection may have travelled deep into India's interiors with the exodus of migrant workers. About 5,00,000-6,00,000 people walked 'barefoot', out of about 41.4 million who migrate for work, according to the central government's affidavit to the Supreme Court (SC) on March 31, 2020. The court was also told that almost one-third of them could be carrying the infection.

What it means is that not just infection but the panic of infection has travelled to rural areas at the time of harvesting (rabi), which are carried out over March and April in different parts of the country. Even though agriculture and allied activities, including the operation of mandis and procurement, are exempt from the lockdown, newspaper reports, and anecdotal evidence suggest widespread disruptions in all such activities.

The presence of jobless migrants adds an extra social and economic burden, for they have to be quarantined, fed and provided with healthcare. Since 68.84% of the total or 833 million people (Census 2011) live in rural areas, they need a huge amount of assistance to cope with the crisis.

The biggest challenge comes from lockdown-induced break in the food supply chain.

Agriculture economist Prof Vikas Rawal of the Jawaharlal Nehru University (JNU) says: "Inability to buy inputs, dispose agriculture produce and breakdown in access to other services like credit could result in complications that would have a far-reaching impact on the whole agriculture sector and rural economy."

He says restoring normalcy, even in a phased withdrawal of the lockdown being contemplated, would call for assuring and ensuring the safety of people in mandis and other activities connected with the supply chain, such as transportation and its support systems.

The first step, experts agree, would be to get the procurement operation going as quickly as possible (should have begun by now in states which go for early harvest like Madhya Pradesh, Rajasthan, and Gujarat).

Prof Ashok Gulati, former chairman of the Commission for Agricultural Costs and Prices (CACP), says the solution is to suspend the APMC-run mandi system and go for direct buying from farmers without charging the market fee.

He says this could be carried out by the Food Corporation of India (FCI) and corporate entities engaged in agri-processing and exports by using various electronic platforms available to them for identifying and scheduling procurement without crowding. Later on the threads can be picked up through the APMC-run mandis.

Prof Sukhwinder Singh of Chandigarh-based Centre for Research in Rural and Industrial Development (CRRID) says procurements must now expand to cover perishable commodities like vegetables and fruits as farmers are forced to destroy their produce since there are no buyers.

All such activities would call for adequate health screening and personal safety equipment like masks.

II. Direct cash transfers to as many as possible

The second important measure involves direct cash transfers to cover not only the farmers but also landless agricultural labourers who migrate seasonally and many of whom have now returned home.

This can be done using several existing schemes.

The PM-Kisan scheme is a major cash transfer programme launched in 2019, under which every farmer receives Rs 6,000 annually in three installments.

Landless agricultural workers, who are among the poorest of the poor, are not covered under this or any other such scheme. They constitute 55% of the total workforce (Census 2011) and should have the first right on government assistance, more so now that they are the hardest hit.

The relief package of Rs 1.7 lakh crore announced recently says the government would "front-load" the first installment of Rs 2,000 in the first week of April for 87 million farmers.

But there are many discrepancies here.

This is revealed by the agriculture ministry's website updated on April 6, 2020, as can be noticed at the bottom of the extract produced below. The fund transfer order (FTO) has only been ordered for the first and second installments of FY20. Two, the relief package sets the target of beneficiaries at 87 million farmers, while the intended beneficiaries of the PM-Kisan scheme are 145 million (above extract).

What happened to the rest 58 million farmers (or 40% beneficiaries) or their money?

The same document also shows the allocation for the scheme in FY21 remains at Rs 75,000 crore, which means tardy implementation of the scheme in the previous fiscal.

This also means that the central government has saved Rs 17,628 crore by way of pending third installment (at Rs 2,000 each to 86 million farmers, on average, who have received the first and second installments, since the numbers vary).

Since the 'frontloading' has not happened yet (as on April 6, 2020) and can be taken care of from the allocations of Rs 75,000 crore for FY21, this net saving can be utilised to provide cash to landless agricultural labour.

Prof Rawal reminds that the MGNREGS has a provision for unemployment allowance. Some states have been giving this allowance from time to time which can now be expanded for the entire country keeping the distress and lack of MGNREGS work in mind to help landless and migrant workers.

The central government's relief package proposes to raise the MGNREGS wage from Rs 182 to Rs 202 (a hike of Rs 20). Since no MGNREGS work is going on or expected for several weeks, this allocation serves no useful purpose.

Instead, the central government should pay unemployment allowance from its budgeted allocation of Rs 61,500 crore for FY21.

Transfer of subsidies, including crop insurance

Then there is crop insurance, which is entirely paid to the insurance companies.

The budget 2020-21 documents show that the allocation for crop insurance was revised downward by Rs 360 crore for FY20. For FY21, a fresh allocation of Rs 15,695 crore has been made. Taken together, this leaves Rs 16,055 crore in the central government's hand which can be passed on directly to the farmers who suffer crop loss (hailstorm and excess rain of March had damaged crops in some areas) or when they fail to harvest or sell due to lockdown, rather than to insurance companies.

Farmers are required to pay only 1.5% to 5% of the premium to insurance companies, most of which are private ones, while the rest is paid by the central government.

Prof Gulati has long been advocating handing over all subsidies to farmers, including input subsidies, crop insurance, and interest subventions, directly to the farmers (simultaneously giving cash subsidy in place of PDS supply to consumers at the other end).

It is relevant here to look at the state of rural economy to appreciate why all such possible help needs to be extended to the rural population, they have been going through a long period of distress. Two indicators need special mention.

One is rural wages.

The RBI provides monthly data on rural wage rates for 25 trades, including agricultural ones. Taking the average of all 25 and inflation-indexing it (against monthly rural Consumer Price Index) shows that the overall growth in 'real' wages has not only been low but negative for a year now. 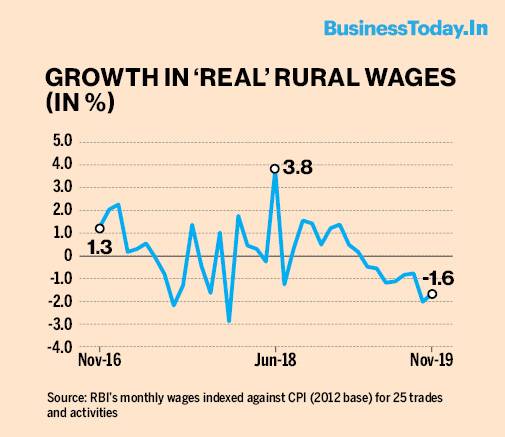 The other is the per capita rural income.

Per capita rural and urban income data are collected only at the time of base year revision of GDP. Thus, the last one was for 2011-12 which showed that the rural per capita income was just 41.5% of the urban per capita income or Rs 40,925. 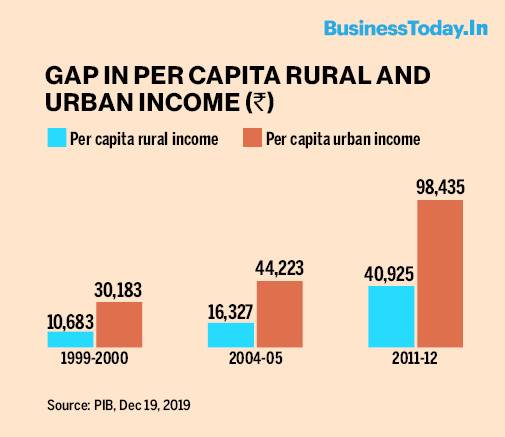 The third quick policy measure is to ensure better credit flow in time for the next cropping season. Farmers are likely to face a tough time accessing loans to buy inputs for the next crop.

Besides, 30% of agricultural households depend on non-institutional borrowings while a significant amount of bank loans meant for agriculture (priority sector lending) are misused and diverted to non-agricultural activities.

All this was revealed by the RBI's Report of Internal Working Group to Review Agricultural Credit released in September 2019.

This has happened because of 3% interest subvention introduced in FY07, making agricultural credit far cheaper than the rest.

To check this misuse and diversion, the RBI suggested two measures, (a) replace interest subvention with direct cash transfer to beneficiaries as individual borrowers or through self-help groups (SHGs) or joint liability group (JLGs) and (b) give loans only through the Kisan Credit Card (KCC) mode.

Such a policy decision would work wonders not only in time for next Kharif sowing (monsoon) when farmers would be hard-pressed for it, but also save many of them from exploiting money-lenders, commission agents and traders who double up as money-lenders.