Coronavirus Lockdown XV: Not just stimulus 2.0, getting fiscal mathematics right is critical too

For years, India's fiscal practices and numbers have remained under a cloud with CAG red-flagging off-budget financing and window-dressing of accounts. Not putting the house in order now means effectiveness of stimulus 2.0 or deficit financing of a higher order would be unknown and unknowable

On the night of May 5, India announced the steepest ever tax hike on fuel, by Rs 13 on diesel and Rs 10 on petrol per litre. This was when the fuel consumption had fallen by 46% and international crude price (India basket) by 67%. The government expects to generate Rs 1.4 lakh crore of extra revenue through this tax hike alone.

This announcement came with a rider: there would be no hike in retail prices.

Who then pays the tax and why the hike in the first place?

The burden would be mostly on the oil PSUs since their market share in retail marketing is more than 90%. The apparent purpose of this tax is to raise funds for stimulus 2.0 to revive the economy. Why this stimulus has been delayed (lockdown started on March 25) is another question that begs an answer.

Once petrol and diesel were decontrolled (by dismantling the administered price mechanism or APM) and "under-recovery" became history after 2014, the hike and the rider violated the stated policy of market determining the retail price.

Besides, the financial health of the oil PSUs is under stress due to the government's fiscal policies.

For example, the Oil and Natural Gas Corporation (ONGC), once a cash-rich company with no history of debts, was forced to borrow Rs 24,881 crore to pick up the government stakes in the Hindustan Petroleum Corporation Ltd (HPCL), another PSU, in 2018. It paid Rs 36,915 crore to the government. That made its financial position so fragile that it wanted to sell HPCL off a year later but was, apparently, not allowed.

A year earlier, in 2017, the ONGC was forced to acquire scam-tainted and bankrupt Gujarat State Petroleum Corporation (GSPC) for Rs 7, 738 crore. The GSPC recorded a loss of Rs 17,061 crore in the same fiscal year, as the Comptroller and Auditor General (CAG) later revealed.

These are not the only concerns. Here are a few more.

First, on May 11 the current status of central government's finances was available until February 2020. The Controller General of Accounts (CGA), which provides monthly accounts of receipts and expenditures, did not update its accounts.

What this means is that the government had no idea of its total receipts, total expenditures and useable surpluses until May 11 or was unwilling to make them public. Since the economy is in lockdown for a long time, a considerable fund would be lying unutilised and revenue collections would have fallen.

Not knowing these numbers is neither conducive for planning nor democratic functioning.

Second, the central government is holding on to funds it should have long passed on. On May 4, the president of industry association ASSOCHAM Niranjan Hiranandani estimated that Rs 3 lakh crore of dues to states and businesses were pending, which included refunds of income tax, value-added tax, goods, and services tax (GST) and compensation, payments to power distribution companies, fertiliser subsidies, etc.

The states' share of GST, a tax regime that drastically curtails states' ability to raise funds, has remained unpaid since November 2019. This works out to Rs 86,257.5 crore up to April 2020 (at bi-monthly benchmark of Rs 34,503 crore).

Third, the PSUs have been financially weakened through large transfers of dividends and surpluses. A 2019 CAG report (number 2) says the central public sector enterprises (CPSEs) paid Rs 76,062 crore in FY18. 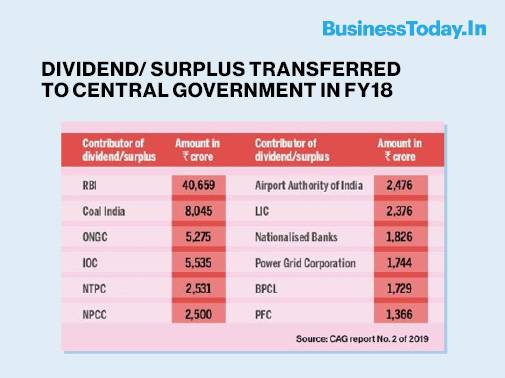 Fourth, fiscal prudence is given a go-by through off-budget financing, which is beyond the control of the Fiscal Responsibility and Budget Management (FRBM) Act of 2003 and hence, the Parliament also.

What this means is that the government's accounts have been window-dressed; the actual fiscal numbers, including fiscal and revenue deficits would be far bigger than the official numbers.

Since then, there has been no assurance on or sign of discontinuation of these practices.

Taxing the oil PSUs to mobilise funds for stimulus 2.0 is all the more ironic because India's economic and social governance model (neo-liberal economics) seeks to reduce the role of PSUs (and government) but offers no solution to the current crisis.

Here is an admission of failure from a very credible agency promoting this model of governance.

On March 31, the chief economist of American Legislative Exchange Council (ALEC) Jonathan Williams wrote, "With all of the uncertainty surrounding the COVID-19 pandemic, we are continually analysing the many policy proposals at all levels of government to address the current situation. Obviously, many of these could lead to an erosion of free markets, limited government, and federalism. I think we can all agree that times of crisis can be dangerous for our shared principles."

What is ALEC and what are its shared principles?

According to its official website, "The American Legislative Exchange Council is America's largest non-partisan, voluntary membership organisation of state legislators dedicated to the principles of limited government, free markets and federalism".

India's governance model is based on the principles of 'limited government' and free-market'. Disinvestment or strategic sale (privatisation) of PSUs and reduced investment in public healthcare (and education) are the consequences. After leaning heavily on public healthcare to fight COVID-19, India is now leaning on PSUs to provide economic stimulus.

Fiscal austerity, which reduces government's deficit financing and against which global top-notch economists have been cautioning for weeks now, is also a part of this model.

India's inability to announce stimulus 2.0 earlier and the on May 8 (45th day of lockdown) disclosure of increasing market borrowing fixed at Rs 7.8 lakh crore for FY21 to Rs 12 lakh crore is largely on account of this fiscal austerity approach or strict FRBM norms.

This model had failed earlier too

The ALEC's admission of failure is no revelation.

The 'limited government' and 'free market' model had no answer to the Great Recession of 2007-08 to which it had contributed significantly. An earlier and milder version of the same model (liberal economics) had led to the Great Depression of 1929. It had no solutions then either. On both occasions, it was the prescriptions (more government role, not less) of John Maynard Keynes (liberal economics) that helped in overcoming the crisis.

The latter approach is being adopted all over the world now, including in India and the US.

The International Monetary Fund (IMF), which forced this model on developing and under-developed countries through its Structural Adjustment Programme (SAP) in 1980s and 1990s (when they sought financial assistance as India did in 1991), has been changing its tune.

Here is one from its report 'Shifting Tides' of December 2018.

Talking about ideology (more government or less) in governance, it concludes that the rightful place of ideology is in setting the objectives or "what", not "how" to address when (free) market fails. 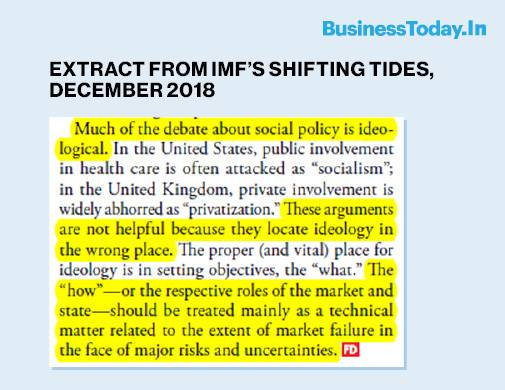 India has a tough task to fund virtually every segment of its economy. Big or small, all market players are seeking bailouts without waiting for the market (in general, not financial/capital market) to self-correct as the 'free-market' model claims.

To that extent, and particularly for the big market players, there would be free lunch, notwithstanding chief economic advisor (CEA) to the finance ministry KV Subramanian's view to the contrary. On May 6 he told a prominent national daily that, "One of the first things that anybody learns in economics is that there is no free lunch", in the context of all-round demand for stimulus packages from the government (more government, not less).

Suspension of critical labour laws relating to hire and fire of workers, minimum wages, maximum working hours, etc. in some states marks the beginning of free lunch for big market players. With 93% of India's total workforce engaged in the informal sector which is largely untouched by labour laws, who else would benefit from such suspension of labour laws?