Coronavirus Lockdown XIV: India needs to own and indulge its workers; they are more vulnerable than ever

Gross treatment to migrants comes along with massive job loss, historically low wage rates, little job or social security and subsistence level existence of millions of Indian workers. This is hardly an ideal situation to recover or rebuild the economy May 5 brought news of catastrophic job losses in India.

There was an overall drop of 30% jobs in April 2020 (from an average of 404 million in 2019-20 to 282 million in April). Larger entrepreneurs reporting job loss is disturbing because it reflects that they think their "business is destroyed for all practical purposes", says the CMIE report. So the loss is not just of jobs but also of enterprises, the job creators.

Loss of employment is expected and will rise even more. How the Indian government responds is critical to how well it recovers, rebuilds its economy, and ensures the wellbeing of its people. Since nothing is known about its plans and strategies more than 40 days after the lockdown and the stranded migrants continue to face indignities at the hands of the state, there are reasons to worry.

But before getting there, here is an interesting aside relevant for India.

The US had added a new phrase to the vocabulary.

Some states reopening their economies warned employees that they would lose their unemployment allowance if they refuse to go back to work for their employees. "That's a voluntary quit", declared Iowa Governor Kim Reynolds on April 24.

This isn't surprising and may not necessarily be unreasonable. Most states give unemployment allowances of varying amounts for up to 6 months or more. More than 30 million Americans have already sought the benefit due to COVID-19 and many are getting it.

In the meanwhile, the Cambridge dictionary modified (about a week ago) the definition of 'voluntary unemployment' to reflect new realities. The definition now reads: "a situation in which someone chooses to not work, either because they will not take a job with low pay, or they are satisfied with the amount they receive from the government in benefits while not working".

How is 'voluntary quit' relevant to India?

There is an Indian precedent.

In mid-2017, Niti Aayog member Bibek Debroy introduced a new phrase to India: 'voluntary unemployment'. He said there had been a dramatic rise in voluntary unemployment in India while responding to the debate about mounting job losses. It was a semantic jugglery to cover up the failure to create 10 million jobs every year that the ruling dispensation had promised.

The Periodic Labour Force Survey (PLFS) of 207-18 later revealed that the unemployment rate had risen to 45-yar high of 6.1%. Thereafter, the Azim Premji University's 2019 study 'India's Employment Crisis: Rising Education Levels and Falling Non-agricultural Job Growth' analysed unit-level data from the NSSO's surveys, including that of the PLFS 2018-19, and concluded that 9 million people had lost their jobs between 2011-12 and 2017-18 and that "this (job loss) happened for the first time in India's history".

Thereafter, no serious attempt has been made by the Indian government to collect job data until now. The CMIE has been tracking how job losses had been mounting even before COVID-19 struck.

He now heads the Economic Advisory Council to the Prime Minister.

What he thinks matter to how India would respond to (i) job loss of informal workers (ii) migrants' inability or refusal to return quickly to work, assuming that they would be re-hired, after having walked for days and weeks after more than 40 days of trauma and humiliation of being abandoned by the state and their employees (iii) job loss of salaried and enterprises (as the CMIE points out) and (iv) lower wage that re-hiring of the displaced workers invariably entails as Nobel laureate Joseph Stiglitz warned the US recently while suggesting what it should do to recover ('Four Priorities for Pandemic Relief, April 2020').

Indian workers are more vulnerable than ever

The condition of India's workers is particularly precarious because of several reasons.

First, millions of daily wagers, salaried employees and enterprises are losing their livelihoods due to the lockdown, and yet there is no sign of a roadmap for recovery and rebuilding the economy. Apparently, there is fiscal constraint and much more.

Second, it has provided no financial assistance to the millions of migrant workers undergoing untold miseries without income, shelter or food. Many have walked home for days and weeks; many more are doing the same. When trains are pressed into service after a long time, the migrants are being charged in full, and some, by the Railways, as it spelt out clearly in its May 2 notification. Some states and opposition political parties have stepped in to help the migrants but not the Railways which is entirely a public asset and service in India and could afford to ferry them free of charge.

A month earlier, it had donated Rs 151 crore to the PM CARES Fund, reflecting its sound financial position. A free service may cost less than this and would have been more fitting for public service. No, the Railways did not give 85% subsidy as was being claimed; it was just a fib.

Third, on May 6 the Karnataka chief minister cancelled trains taking the migrants home hours after meeting the builders. He reasoned that work would resume soon and hence the migrants were needed. The migrants then started walking home to far off Bihar in protest.

Meanwhile, some migrants started walking from Kerala too as some states refused permission to trains citing inability to handle the inflow, Bihar being one of those.

Fourth, at least 6 states (Rajasthan, Gujarat, Punjab, Haryana, Madhya Pradesh and Himachal Pradesh) have extended working hours from 8 hours to 12 hours. They may have done this due to social distancing norms at workplaces or catching up with productions with suitable provisions for bonuses but those familiar with India's work culture would agree that this is a recipe for short-changing workers.

Fifth, while the March 26 relief package announced that the Welfare Fund for Building and Other Construction Workers (BOCW), created under a central government law, would be used to assist 3.5 crore (35 million) registered under it, there is no sign of anyone benefitting from it.

The sum of Rs 52,000 crore in the fund remains unutilised. In the meanwhile, a survey by non-government organisation Jan Sahas has found that 94% of construction workers don't have BOCW cards, making them ineligible for cash transfers. Further, 14% did not have ration cards and 17% bank accounts. This survey was conducted between March 27 and 29.

Wait, there is more to it.

Indian workers are also vulnerable because 93% of them are informal with abysmally low wages and job or social security.

The national minimum wage rate is Rs 176, fixed in 2017. In mid-2019, it was raised from Rs 2 to Rs 178 but not notified and hence not applicable. This came after a government panel led by Dr. Anoop Sathpathy of the VV Giri National Labour Institute recommended Rs 375 in January 2019. 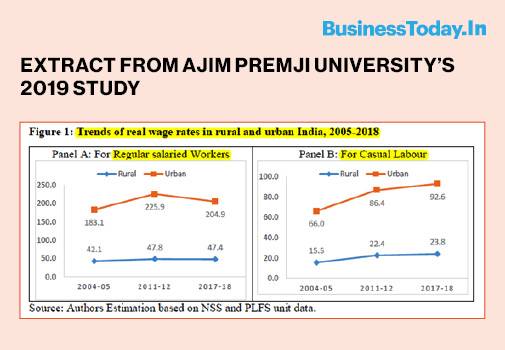 Just how low these wages are would be clear from the international standard for poverty.

The World Bank's poverty level for a low-middle income country like India is $3.2 or Rs 243 of living expenses. This was fixed in 2017 and thus, can be used as a benchmark. The World Bank, in its October 2019 update said 50% or 659 million Indians live in poverty.

There is another reason too.

Lack of social security is evident in the plight of migrant workers now. How productive a starving and insecure workforce can be is easy to imagine. As for the wellbeing of a large population dependent on such workers (93% of the total workforce is informal) the less said the better.

A culture of impunity

Prime Minister Narendra Modi has repeatedly appealed to employers not to sack workers and protect their wages during this emergency.

Notwithstanding this, one of the most profitable and cash-rich industrial houses in India recently announced 10-50% cut in salary of its employees. Exactly a month ago, the same industrial house had donated Rs 500 crore to the PM CARES Fund, apparently to assist in the fight against the same emergency.

This development counts because it incentivises others to follow, whether they donate to the PM CARES Fund or not. In the meanwhile, several government entities have donated to such relief funds while withholding salaries of their employees for months together.

Also Read:Coronavirus Lockdown II: How serious could the impact be on Indian economy and GDP