Coronavirus Lockdown X: Why it can't be business as usual for India

While widespread poverty and inequality have reduced the capacity of a large population to survive the crisis of health and livelihood, the Indian government needs to get its priorities right to deliver what is expected of it Poverty and inequality matter when health and economic emergencies hit, like the ones now

Two news items stuck out in the third week of April amidst a global gloom over the recessionary impact of COVID-19, one from the US and the other from India, both reflecting how the pandemic is no deterrent to business-as-usual for policymakers.

US bailouts for large corporations

In the case of United States, an investigative report found that the "Paycheck Protection Program" launched on April 3 to provide emergency loans to small businesses having "no access to capital" benefitted 94 publicly traded large firms, some with over $100 million in market value.

These loans are meant to help small businesses keep workers on the job and pay bills on time but "neither the Trump administration nor the lending industry has disclosed a list of Paycheck Protection Program beneficiaries". The investigation was based on regulatory filings and was limited in scope, not exhaustive.

The report said these publicly traded companies or their subsidiaries received $365 million of taxpayers' money as aid. About 25% of these "had warned investors months ago" about their viability, that is, they were already in the red. The US Small Business Administration (SBA), a government agency, dismissed the findings saying that "less than 10% of the loans made" went to large companies. That may be so until full details emerge. 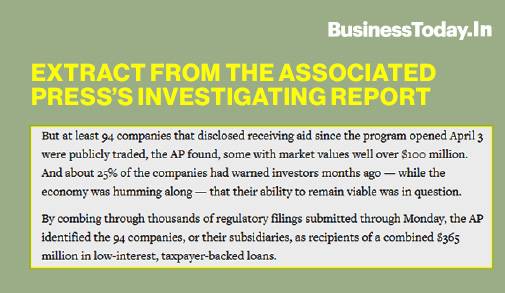 One of the beneficiaries, burger chain Shake Shack Inc., has now declared that it would return $10 million loan it received due to public criticism.

This is not the only issue with the reliefs that rocked the US. The other one is cash grants and loans for airlines under the CARES Act of 2020 because some of the big airlines had spent a fortune ($90 billion) in stock buybacks in the past decade.

Stock buyback (repurchases) is increasingly viewed with suspicion as a tool for manipulating stock prices, benefitting a few at the cost of employees and continuing shareholders, and causing financial fragility by reducing cash surpluses.

Such buybacks are a regular practice. One year after the US granted tax relief to corporate entities under the 2017 Tax Cuts and Jobs Act, the US Congress found that it had led to a record-breaking stock buyback of $1 trillion in 2018, instead of boosting investment or creating jobs for which it was meant for.

The CARES Act of 2020 did include a clause banning stock repurchases for a year beyond loans being paid back.

Nevertheless, questions are being raised about whether their financial misconduct and profiteering should be rewarded with taxpayers' money.

No bailout for tax haven entities in Europe: In the meantime, several countries in Europe, like France, Denmark, and Poland, have already announced blocking corporate entities registered in tax havens (to avoid tax) from claiming taxpayers' money for bailouts. The UK-based transparency campaign group Fair Tax Mark has appealed to the UK government to do the same.

India's misplaced priority in the time of hunger

The other news that stuck out was from India.

On April 20, the Ministry of Petroleum and Natural Gas decided to make alcohol-based hand sanitisers and strengthen the ethanol blending programme (EBP) from "excess" food grains with the Food Corporation of India.

This would mean handing over excess food grains to distilleries and sugar companies to make hand sanitisers and ethanol for blending.

The timing is shocking.

For one, ethanol blending is an old programme with the difference that while earlier rotten or wasted food grains were used for the purpose now consumable "excess" stock will be used while millions of Indians are fighting hunger.

In the weeks preceding this announcement, reports, and images of migrants walking or cycling hundreds of kilometres to home, some perishing on the way from hunger and exhaustion, thousands stuck in big cities like Delhi, Mumbai, and Chandigarh queuing up every day for miles to gather food and reports of starvation deaths in Bihar and Jharkhand had dominated the headlines.

It isn't surprising, therefore, that academics and civil society activists are demanding that the excess food stocks be released immediately and given to all who seek, irrespective of whether they have ration cards or not. The public distribution system (PDS) has been notorious for its failures.

Academics Jean Dreze, Reetika Khera and Meghna Mungikar have calculated that "more than 100 million people are excluded from the PDS" under the National Food Security (NFS) Act of 2013 because the number of beneficiaries remains "frozen" at the 2011 Census figures. This law provides for PDS supply to 75% of rural and 50% of urban population (or 67% of total population).

Should the priority not be then to use "excess" food stocks to feed people?

Besides, making ethanol can't be the priority when consumption and prices of oil have hit an all-time low. Or that of hand sanitiser over food needs.

India has announced two relief packages so far: (a) Rs 1.7 lakh crore for the poor and (b) Rs 15,000 crore of emergency health relief, out of which only Rs 7,700 crore is earmarked for FY21. A stimulus package for industry is in the works.

While the package for the poor provides free 5 kg wheat/rice and 1 kg of preferred pulses a month for three months to those covered under the NFS Act, millions of migrants stuck at various places throughout the country find no mention in it.

Furthermore, the relief packages are less than 1% of India's GDP. The actual deployment of the relief fund would be far less since a substantial part of it is already budgeted for FY21.

In contrast, the US has announced relief of about $3 trillion, after the fourth package of $484 billion was approved by the Senate on April 22. This is about 15% of the US's GDP.

Why does size matter? A bigger fund/investment means a stronger kick-start to the economy.

What happened to Rs 1.45 lakh crore tax reliefs to corporates?

The reason for India's meagre relief package and delay in stimulus for the industry is its tight fiscal position. Part of this is self-inflicted.

In September 2019, the central government made an out-of-the-blue announcement of tax relief worth Rs 1.45 lakh crore to corporate entities. This was when the quarterly GDP growth had been nose-diving for several consecutive quarters, reaching 5.6% by the end of September 2019, from a high of 8.1% in Q4 of FY18.

The tax relief was given with the claim that it would boost growth and investment, just like the US.

But unlike the US Congress, which found out what actually happened with the tax relief, the Indian Parliament has made no such attempt and hence, it is not known how the excess cash was used.

Half the population is poor, inequality is high

Just how the central government has got its priorities wrong would be clear from two more facts.

First, the Centre itself concedes that "catastrophic expenditure" on health "pushes nearly 6 crore (60 million) Indians into poverty each year" (in "key features" of the PM-JAY or Ayushman Bharat programme document).

Second, the World Bank says 50% of India's population is poor. In October 2019, it provided an updated estimate saying that as per the poverty line fixed for lower-middle-income countries, "half of India's total population or 659 million were poor" in 2015. When it comes to inequality, the situation is no better.

India ranks 95 among 159 countries with a Gini coefficient (a measure of inequality) score of 35.7. A Gini index of '0' represents perfect equality, while an index of '100' implies perfect inequality. A 2017 study by French economists Thomas Piketty and Lucas Chancel showed that inequality sharply rose since the mid-1980s "when pro-business, market deregulation policies were implemented".

Why poverty and inequality matter now?

Poverty and inequality matter when health and economic emergencies hit, like the ones now. That is because they reduce the capacity to overcome such challenges.

With half the Indians poor, surviving on $3.2 a day, they can't afford the COVID-19 test which costs Rs 4,500 in a private clinic (or $60) - 19 days of their living expenses. Nor can they afford food because the prolonged lockdown has denied them income for long.

Economist Prof Arun Kumar says: "Today we are paying for our past sins in ignoring the uncivilised conditions of the poor who are unable to cope with the lockdown and making it difficult to implement. It is clear that countries that have greater poverty and inequality are less able to cope with COVID-19."

It is precisely for such reasons that a UN report, presented to the General Assembly in September 2018, had warned against an economic and social order that undermines the "interests of low-income earners and those living in poverty". 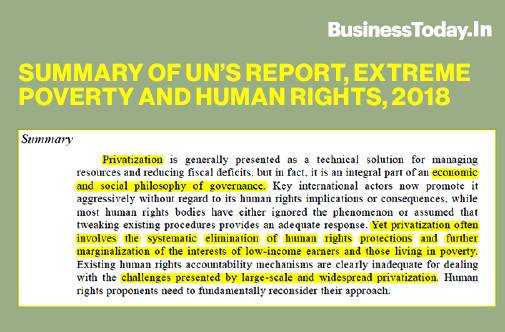 The objective of this report was to point at systemic neglect to which those living in poverty are too often subjected to and identify approaches to its remedy.

It should then be clear why it can't be business-as-usual any more, be it in the US or India.