More than the accumulation of scientific, technological and economic capital, it is their deployment for safety and well-being of the masses that determines how effective the counter to the current and future pandemics would be Apart from scaling down public healthcare, another critical lesson that a Harvard University paper mentioned in its study is for the leaders to listen to experts

One of the great ironies of the fight against COVID-19 is that the countries going through the worst nightmares are the ones with the best scientific, technological and financial resources. They are members of the elite OECD club.

What makes them so vulnerable to the pandemic? Why have they failed to respond quickly and effectively to save their people?

Several academic institutions have gone into these questions and come up with a list of lessons that the governments of these countries need to learn. Whether any lessons are learnt remains to be seen. Nevertheless, there is little doubt that these lessons are equally relevant for India and hence, need to be told.

A research paper of the London School of Economics and Political Science (LSE) says COVID-19 has put "unprecedented pressure" on European healthcare systems and that there are at least two early lessons to be learnt in terms of healthcare policies.

The inference is clear: rising dependency on private healthcare has made Europe vulnerable. Here are the LSE's two early lessons. 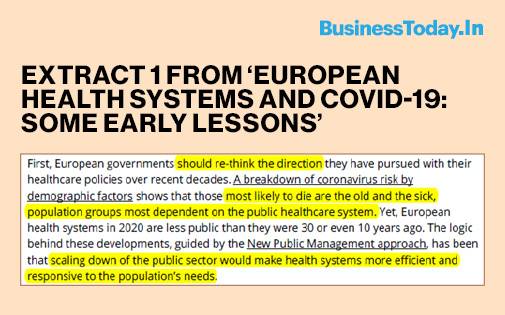 The paper exposes the fallacy of private healthcare being more efficient or more responsive to people's needs by pointing out that it creates a two-tier health system and eats away solidarity provided by the public healthcare system. 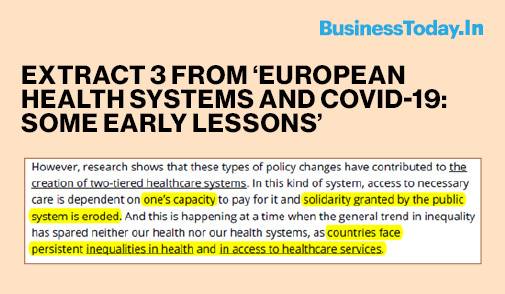 A Harvard University paper looks at the operational aspects. One critical lesson it talks about is for leaders to listen to experts, rather than rely on their gut feelings or inner circles. 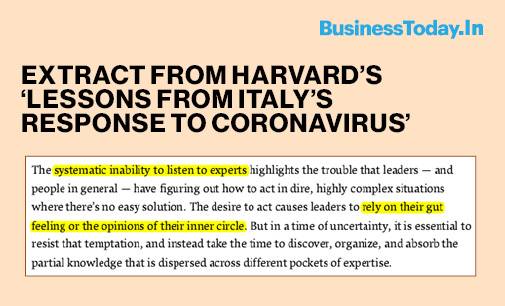 The other lessons are to learn from China and South Korea to take "multitude of actions" simultaneously, instead of being a one-trick pony; war-like mobilisation of human and economic resources that need to be deployed and sound coordination across different parts of the healthcare system, different entities in both public and private sectors and society at large.

How did the world miss repeated pandemic warnings?

That such lessons are being talked about now should come as a big surprise because public health experts have been warning against the risks of epidemic and pandemic throughout 2019. The last one came in January 2020. All these warnings were issued from global platforms which couldn't have been missed. An epidemic is a local or regional phenomenon while a pandemic is a global or multi-country one.

Here are some such instances.

In January 2019, the World Economic Forum (WEF), the very same month in which it holds annual meetings at Davos for a week in which prominent global leaders from politics and businesses participate to deliberate on global concerns, issued a white paper to mark the 100th anniversary of the 1918 Spanish flu pandemic.

It said, "a new era of the risks of epidemics has begun". The number of diversity of epidemic events, like the 2014 Ebola in West Africa, had been increasing over the past 30 years, a trend, which it said, was "only expected to intensify".

It then issued a dire warning: "...the world remains ill-prepared to detect and respond...to a significant pandemic threat." A few months later, in October 2019, there was another such warning from the first-ever Global Health Security Index (GHSI) developed by the Johns Hopkins Centre for Health Security, Nuclear Threat Initiative (NTI) and Economist Intelligence Unit (EIU).

It mapped 195 countries on six health parameters--prevention, detection, rapid response, health system, compliance with international norms and risk environment, and came to conclusion: "National health security is fundamentally weak around the world. No country is fully prepared for epidemics or pandemics and every country has important gaps to address."

The message couldn't have been clearer. 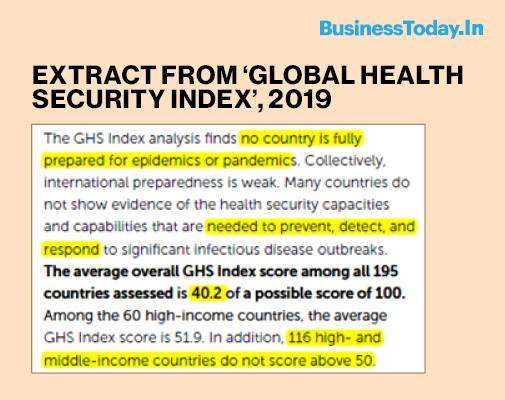 The GHSI added that political will was needed to protect people and build a safer and more secure world.

India scored higher than the global average (with 46.5 points against average of 40.2) and ranked 57.

Here is how India scored in all six parameters. In January 2020, there was yet another report from the WEF, Global Risks Report 2020.

The first paragraph of its executive summary listed public health as one of the "severe risks" for 2020, reproduced below. This report was prepared with top global institutions as "academic advisors" such as National University of Singapore, Oxford Martin School of University of Oxford and Wharton Risk Management and Decision Processes Centre, University of Pennsylvania.

Its January 2019 report too had warned that the world was badly prepared to face even modest biological threats. 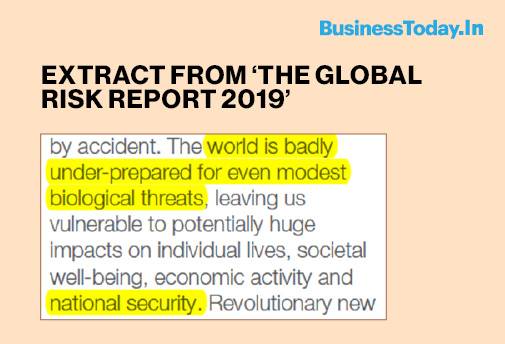 Why these warnings were missed?

There is no way these warnings could have been missed, especially since two of these came from the WEF, timed to its annual week-long meeting at Davos which is attended by a galaxy of global political and business leaders.

Andy Xie, a former World Bank economist who specialises on China and Asia writes that these warnings were ignored by the global ruling elite because the existing world order is driven by privatisation and greed, rather than safety of the masses.

Xie gives the US example: "The US spends nearly one-fifth of its GDP on health care but is failing to cope with a pandemic like COVID-19 because resource allocation has been driven by profit, not the safety of the masses. As vested financial interests resist the reallocation of resources, the economy is likely to be dragged down."

That the US is now facing a serious shortage of essential drugs for COVID-19 patients is not a secret. The US President has admitted this in public.

'The business of business is business'

It is a matter of common knowledge yet bears repetition that the global approach to healthcare, and much else, underwent significant changes in the 1980s. The Washington Consensus and the subsequent Structural Adjustment Programme (SAP) promoted by the World Bank-IMF marked a paradigm shift in the way governments and businesses operate across the world.

In this order, the role of government progressively reduced and that of the market (or businesses) increased. The American economist who had an overwhelming influence on this order was Milton Friedman, a Nobel laureate (1976) often credited with the famous statement: The business of business is business.

His role in undermining humane aspects of business, or "social responsibility of business" as it is known in academic and business worlds and which had made a strong comeback in the 1960s and 1970s is unparalleled. His 1970 article in New York Times, The Social Responsibility of Business is to Increase its Profit is very relevant to understand the COVID-19 menace.

In this article, he wrote that the social responsibility of businesses was a "fundamentally subversive doctrine in a free society...there is one and only one social responsibility of business--to use its resources and engage in activities designed to increase its profits so long as it stays within the rules of the game, which is to say, engages in open and free competition without deception or fraud".

The LSE paper on early lessons of fighting COVID-19 quoted earlier explained brilliantly the consequences of this line of argument.

A similar trajectory for India

India has followed this global trend and finds it difficult to protect its masses from the health emergency it faces now.

Its 1991 liberalisation push was driven by the very same Washington Consensus and World Bank-IMF's SAP and saw equally dramatic fall in public spending in healthcare. The 10th (2002-07) five-year plan's PPP model for development, followed by the insurance models of healthcare, Rashtriya Swasthya Bima Yojana (RSBY) and PM-JAY of 2008 have further diluted the role of public healthcare.

A lesser-known consequence of this policy paradigm is now staring India on the face: loss of self-sufficiency in medicines. India now imports two-third of its active pharmaceutical ingredients (API) and formulations from China. Unless supplies from China are restored quickly, India might face a serious crisis in the availability of medicines, including the API for making hydroxychloroquine much in demand worldwide even though its efficacy in treating COVID-19 is questionable.

India has already witnessed about 50% rise in prices of generic drugs due to the Chinese lockdown.

Public health expert Dr Sakthivel Selvaraj of the Public Health Foundation of India (PHFI) says India lost its self-sufficiency due to the gradual withdrawal of its public sector from pharmaceutical productions both in API and bulk formulations since 1990.

There is the China factor too. He says China's rise as a big and cheap supplier of APIs and bulk formulations and its ability to use technology, state support and infrastructure to achieve the economies of scale made it a big global player. Instead of making on their own, Indian private sector pharmaceutical companies found it economical to import API and formulations from China.

Interestingly, two of India's PSUs, Indian Drugs and Pharmaceuticals Ltd (IDPL) and Hindustan Antibiotics Ltd (HAL) which made India self-sufficient in APIs have turned sick due to prolonged neglect.

What happened to the miracle drug Penicillin?

Another manifestation of this neglect of public healthcare is the complete disappearance of the miracle drug and the world's first antibiotic--penicillin.

The public sector unit HAL was set up to produce it commercially in the 1950s. When the Indian government wanted it to produce penicillin again in late 2019, the PSU expressed its inability. India largely depends on China for the supply of Penicillin G, a natural penicillin used clinically and a major raw material for most antibiotics manufactured in India. Its price has surged too.

Penicillin G is a very important antibiotic for the treatment and prevention of rheumatic fever and rheumatic heart disease (RHD). India is the global capital of RHD with the maximum number of patients and casualties. The last known study of 2017 showed India had 40% of total RHD patients (13.7 million cases) world over and had claimed 119,100 lives in 2015, the maximum in the world.

Apart from scaling down public healthcare, another critical lesson that the Harvard study mentioned earlier is for the leaders to listen to experts.

India particularly needs this lesson as quickly as possible because political leaders and even the central health ministry are ceaselessly promoting highly questionable cures.

A central health minister advises Indians to "spend at least 10-15 minutes to absorb the sunlight so that we get vitamin D which improves the immunity of our body and also kills such viruses". Another central health minister claimed that Prince Charles was cured of the COVID-19 infection by ayurvedic treatment. When this was officially denied by the UK government, the minister dismissed it.

An organisation associated with the ruling establishment held a "gaumutra party" in New Delhi recently to convince people that drinking cow urine cures the infection. Newspaper reports say thousands of litres of cow urine are being consumed daily in Gujarat now.

The Ministry of AYUSH is promoting homeopathic, Ayush and Ayurvedic cures that have not been scientifically proven. Among other things, it advised people to sip water boiled with tulsi (Ocimum sanctum) or take 'Arsenicum album 30' (a homeopathic drug) as a cure for a virus the world knew nothing about before December 2019.

Nor does it matter to the health ministry that in July 2019, the homeland of homeopathy, Germany, saw its national doctors' association asking health insurance companies not to provide cover for homeopathic medicines because "there is insufficient scientific evidence for the efficacy of homeopathic procedures..." This was after France did the same.

Dr. RV Asokan, secretary-general of the Indian Medical Association (IMA), India's largest body of medical practitioners, reminds, "Whatever success India has achieved in stalling this epidemic is due to the scientific and evidence-based modern system of medicine. Even recovery from critical conditions was by the use of scientific methods. We don't have the luxury of opting for systems of medicine with insufficient scientific evidence."