This was more than double the amount drawn two fortnights before that; RBI says Rs 53,000 crore was withdrawn -- a 16-month high -- in cash in fortnight ended March 13 when lockdown rumours were at its peak

Panic-stricken Indians tanked up on cash and withdrew as much as Rs 84,461 crore in the two fortnights before lockdown, more than double the amount drawn two fortnights before that. According to data released by Reserve Bank of India (RBI), Rs 53,000 crore was withdrawn-- a 16-month high -- in cash in the fortnight ended March 13 when lockdown rumours were at its peak. In the following 14 days, cash withdrawal from banks was Rs 31,575 crore. But the fortnight also included 4 days of lockdown-- March 22, 25, 26 and 27.

This took the total currency with the public to a record high level of Rs 23.4 lakh crore, as on March 27. To slow the spread of coronavirus, Prime Minister Narendra Modi announced a complete shutdown in the country for 21 days, starting the midnight of March 24-25 till April 14, asking 1.3 billion Indians to stay home.

Also read: Centre had $5.26 billion in outstanding loans from RBI in week to April 3

Currency with the public is a term referred to as people's demand for cash, which is arrived at after deducting the cash with banks from the total currency in circulation. The withdrawal during the fortnight ended February 14 was around Rs 39,497 crore but fell by a little over Rs 2,000 crore in the following time period. 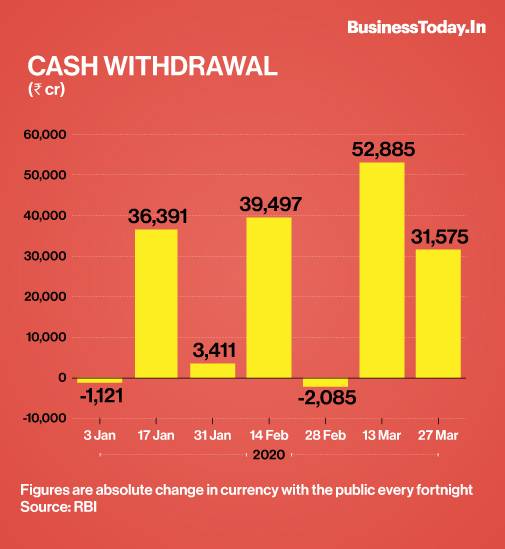 These withdrawals, however, were lower than Rs 87,621 crore drawn out during the fortnight ended January 20, 2017, the period soon after the demonetisation of currency note that ended on December 30, 2016.

To contain the spread of coronavirus and ensure the safety of citizens, the central bank has urged people to use digital banking facilities and is putting more emphasis on digital payments. However, restricted movement during lockdown is disrupting the delivery services of many e-commerce firms, pushing many to even stop their delivery services. As per the NPCI data on retail payments, UPI transactions in volume terms declined from 1,325.7 million in February to 1,246.8 million in March 2020. It saw a contraction of 7.2 per cent in value terms during this period. On a month-on-month basis, UPI transactions have fallen in three months, including March, in the entire financial year 2019/20. 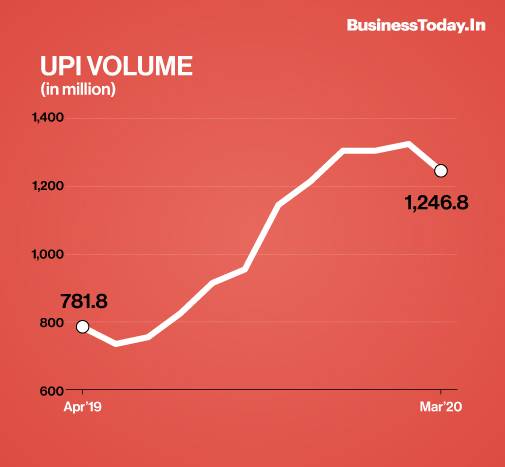