What ails the economy is lack of demand. There's only one factor that can revive the economy instantly - consumption. Post-lockdown, it's critical to stimulate demand and drive consumption in the economy. Can the stimulus do that?

At Rs 20 lakh crore, the fiscal stimulus package is 67 per cent of government of India's Rs 30.42 lakh crore projected spending for FY21. Hence, it's extremely unlikely that the entire package applies to fiscal 2020-21 alone. It will probably spread over a couple of years, perhaps until FY22. May be longer.

But just as Finance Minister Nirmala Sitharaman is expected to spell out the exact details of the stimulus, it's critical to watch out for signs of what will stimulate the economy right away, what will take longer, and what will take way longer.

Of the four 'L's Prime Minister Narendra Modi specifically mentioned in his speech, at least 3 - land, labour and law - are long-term measures, where the impact of the reform measures will reflect over a long period of time. Perhaps, 3 to 5 years. The fourth, liquidity in the economy is the only measure that will have a direct bearing on reviving the economy, but the country's banking regulator Reserve Bank of India (RBI) has already taken significant steps adding up to over Rs 4.73 lakh crore (about 2.4 per cent of GDP). 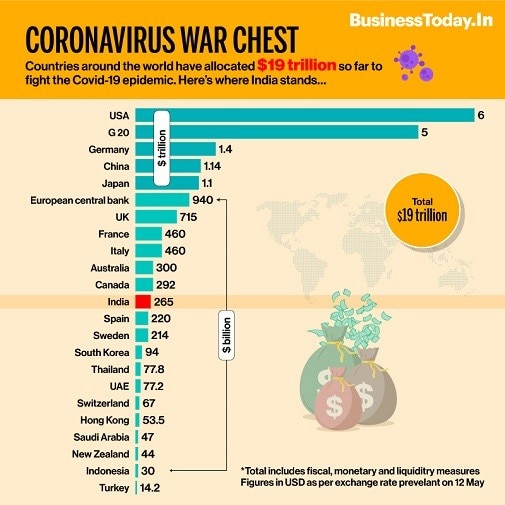 But there's only one factor that can revive the economy instantly - consumption. What ails the economy right now is lack of demand. Post-lockdown, it's critical to stimulate demand and drive consumption in the economy. Here's what to look for in the package:

At a time when public expenditure is the only engine of the economy that is functioning, the government has to ensure that it is the flagbearer of any revival plan in the works. Far from a status quo on the fiscal public expenditure programme, Centre needs to accelerate it from whatever additional resources it intends to raise. Since infrastructure drives hundreds of allied industries, including major ones like steel and cement, the additional expenditure planned in the stimulus will define the true intent. Accelerating investment in healthcare and other infrastructure, accelerating execution of existing infrastructure projects identified under the National Infrastructure Pipeline, and enabling NIIF to raise private and foreign capital could be on the cards.

Nothing drives demand more than tax cuts. However, barring the corporate tax cuts, the government has so far shied away from tax cuts. Instead, most taxes have seen a spike. If the Centre can take the bold step to slash personal, corporate or GST rates and make up for such revenue shortfall from either printing more money or additional borrowings, it would have given the biggest booster to consumer confidence to spend more. Not just on essentials but, perhaps, also on discretionary products such as phones, durables and even automobiles.

Concession to home buyers, for example, in GST rebates, rebates on stamp duty for a specified period of time could help raise demand for the real estate sector.

Since the per capita amounts of direct benefit transfer (DBT) are generally small and aimed at the poorest of the poor, they largely go towards subsistence spending rather than pumping demand. However, Prime Minister Modi's commitment to take care of the workers and labourers have provided hope of bigger amount than DBT has seen till date. The bigger the DBT, the more directly it will aid consumption.

More than 135 million informal workers and contractors expect payroll support from the government during the lockdown period. An ideal payroll support as witnessed in most affected countries in the West has been about the Government paying employer's contribution of wages, even employees's. The least impactful would be the other option of waiving the mandatory employers' PF contribution or reduce PF contribution for both employers and employees. Payroll support will not just provide security but will leave thousands of crores in the hands of individuals to drive consumption.

Employing over 110 million people and contributing to nearly one-third of India's economy, survival of MSMEs is not a choice - it's the need of the hour. How the Prime Minister's declared intent to support MSMEs plays out will be most keenly watched. Besides payroll support, what is expected though is: Credit guarantee fund with 75:25 risk sharing between Centre and banks; an additional line of liquidity from RBI to banks and non-banks of up to Rs 1.2 lakh crore to extend working capital lines structured through corporates and to reach their supply chains; loan to first-time MSME borrowers of Rs 1 lakh crore with 75:25 risk sharing between Centre and banks.