IMD's forecast for 2017 looks quite tentative with the department itself attaching only 38 per cent probability to the projection of normal rainfall.

The India Meteorological Department (IMD) forecast on April 18 that this year's south-west monsoon would be normal. The official weather forecaster expects rainfall to be normal at 96 per cent of the long period average (LPA) with a model error of +5 or -5 per cent.

Although a normal monsoon for the second year in a row can significantly boost the gross domestic product (GDP) growth, there is some scope for doubt regarding the forecast. Going by the CMIE data, IMD has a track record of overestimating rainfall. Rainfall was below normal (lower than 96 per cent of the LPA) in seven out of the last 16 years. The IMD managed to get the forecast right only in 2014 and 2015. But even in those years, the IMD's projections were eight percentage points higher than the actual rainfall deviation. 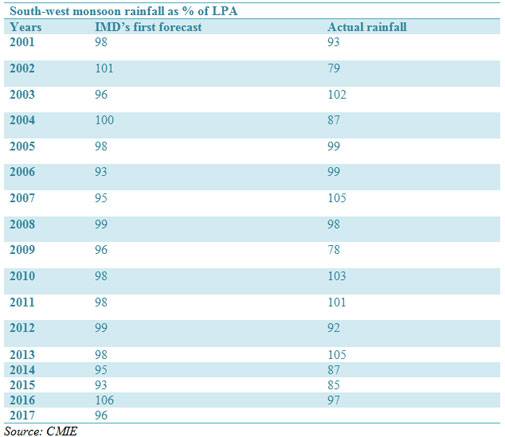 IMD's forecast for 2017 looks quite tentative with the department itself attaching only 38 per cent probability to the projection of normal rainfall. Private weather forecasters have already warned about the impact of El Nino on south-west monsoon this year.

Skymet has projected 2017 rainfall to be below normal due to El Nino, a phenomenon associated with warming of Pacific waters. Another private forecaster Weather Risk is also of the opinion that El Nino will have a negative impact on the latter part (August-September) of the south-west monsoon in India. These two months account for nearly 50 per cent of the total rainfall during the south-west monsoon season.

Despite the shrinking contribution of agriculture to GDP, India's economic growth is still dependent on it. Poor rainfall during the El Nino years not only affected agricultural output, but also dented consumption, demand and the overall economic growth. Going by the CMIE data, the kharif foodgrain output saw an average year-on-year contraction of 5.7 per cent during these years. The average gross value added growth in agriculture, private final consumption expenditure growth and the overall GDP growth at 3 per cent, 5 per cent and 4.4 per cent, respectively, were also significantly lower than the 5.8 per cent, 6.6 per cent and 6.1 per cent growth, respectively, seen during the non-El Nino years.