News
LATEST
Economy Politics
India stares at 5th recession: How is it different from the past downturns?

India stares at 5th recession: How is it different from the past downturns?

Recession is defined as a fall in the overall economic activity for two consecutive quarters (six months) accompanied by a decline in income, sales and employment. In independent India's history, four such years of negative GDP growth were registered. They saw contraction of -1.2% (FY58), -3.66% (FY66), -0.32% (FY73) and -5.2% (FY80). The recession looming now is different from previous recessions as it comes with a fresh set of challenges.

Previous contractions in India's GDP had common culprits - weak monsoon and energy crisis. But if India's FY21 GDP contracts, as projected by analysts, its cause would be entirely different. 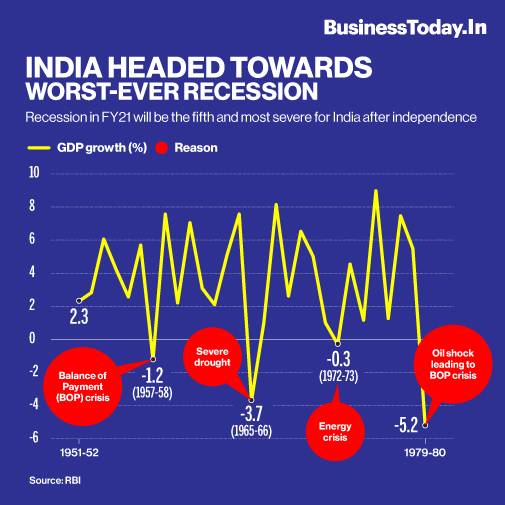 The year 1957 was a difficult period for agriculture sector. Weak monsoon adversely affected agricultural production, which led to increase in prices. The government which had already imported 20 lakh tonnes of food grains in the previous fiscal had to further import 40 lakh tonnes. During 1957-58, India encountered its first drop in economic growth when a negative GDP growth of 1.2 per cent was recorded. The reason behind it was a ballooning import bill which swelled by more than 50 per cent between 1955 and 1957. During the same time exports registered a sluggish growth. India's trade deficit widened by over 9 times from $0.1 billion in 1955 to almost $0.9 billion in 1957 while gold stock and foreign reserves were reduced to half.

India which had fought wars with China in 1962 and more recently with Pakistan in 1965 was in a recovery stage. The very next year, two severe droughts affected Indian economy (during 1966 & 1967). During that time India had heavy reliance on foreign aid especially from the US. In FY1966, due to drought, food grain production fell 20 per cent. Foreign food aid came to the rescue of the starving population. India received 70 lakh tonnes of food aid in fiscal 1965, equivalent to 10 per cent of domestic production.

In 1973, world witnessed its first energy crisis as the Organisation of Arab Petroleum Exporting Countries (OAPEC) proclaimed an oil embargo (an embargo is an official ban on an activity or trade with a particular country). It targeted nations that were supporting Israel during the ongoing "yom kippur" war. As a result, in a short while, oil prices shot up 400 per cent from $3 to $12. Consequently, India's oil import bill rose from $414 million in 1972-73 to $900 million till 1973-74. This was twice the amount of foreign exchange reserves present at that time. Since then energy became a top most priority for India. In 1972-73, India's economy contracted by 0.32%.

The world witnessed a second oil shock during 1979-80. It occurred due to a decrease in oil production in the wake of Iranian revolution and led to increase in oil prices. This was followed by Iran-Iraq war which further curtailed production and escalated prices. This led to a serious crisis as the cost of India's imports almost doubled between 1978-79 to 1981-82. During this time, India's exports also took a hit as it contracted by 8%, which led to a balance of payment crisis.

The current recession staring at India brings a new set of challenges. The crisis has emerged out of the blue as the country is in a lockdown, severely hampering economic activity. For India this is estimated to be the worst ever contraction of GDP growth. RBI in its MPC meet acknowledged that this year's GDP will be in negative territory but refrained from giving any numbers. However other agencies predict a sharp contraction in the range of 5%-6.8% in FY21, with the bulk of the fall estimated to be in Q1 of FY21 when quarterly GDP may contract by nearly half.