About 48 hours before the new accounts were made live by Prime Minister Narendra Modi on Thursday, August 28, Andhra Bank executives set things in motion.

Measure it by any yardstick and opening 1.5 crore new retail bank accounts in a day across the country is a huge task. Indian banks managed to do just that on August 28.

We take a look at how they managed to achieve this ambitious target set by government, as part of the Pradhan Mantri Jan-Dhan Yojana,  by analysing the performance of Andhra Bank, a leading bank from Andhra Pradesh (and Telangana), a region that was once the hub of microfinance.

About 48 hours before the new accounts were made live by Prime Minister Narendra Modi on Thursday, August 28, Andhra Bank executives set things in motion. "We first held a video conference with all the 33 odd zonal managers across the country and conveyed to them the target set for us," says C. V. R. Rajendran, Chairman and Managing Director of Andhra Bank.

The next step was to deploy people and reach out to all the locations. "We set up roughly 2,000 camp offices across the country, including around 3,500 in Andhra Pradesh and Telangana alone. 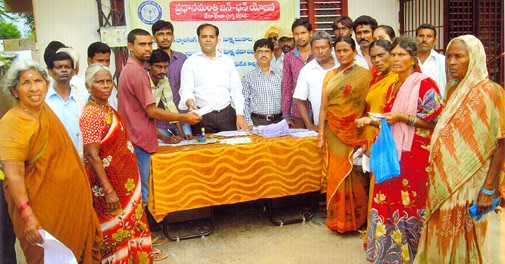 These were temporary arrangements made to collect bank applications and were either near a bank branch or in a village temple or a marriage hall and if there was nothing then we put up a tent. We even reached out to remote locations that were away from a bank branch but were serviced by a business correspondent appointed by the bank in that area, for instance in some parts of Odisha," he says.

All the senior staff including Rajendran divided the zones to be covered by them and reached out to the staff and joined some of the camps. "All the application forms would be collected during the day and in the evening these would be loaded into the system and they all went live on Thursday," says Rajendran.

While financial inclusion through opening up of new accounts has been happening over the years, the big draw this time was the privileges attached to them such as insurance cover and overdraft facility, according to Rajendran.

Banks also leveraged the financial intermediation vehicles, such as microfinance institutions and business correspondents to reach out to far flung locations apart from reaching out to the self-help groups across the country. "Since there is almost no microfinance activity in Andhra and Telangana, we reached out to the bank-liked self help groups (SHGs) in the region.

Today, we have around 3 lakh SHG accounts in Andhra and Telangana  and now the members of this group also came forward and opened their accounts," he says.

The KYC (know your customer) norms have "not been diluted and it includes what is normally done such as one identity proof," adds Rajendran. While Rajendran says the norms on KYC have not changed, some argue that they have been somewhat relaxed with residence proof or Aadhaar being the minimum insisted upon. Also, apparently, there is no requirement of an introduction and in some cases only a self-certification by a person before the bank officer to open an account was required.

Other banks too have been aggressive in opening bank accounts. Consider the State Bank of India . It opened 20 lakh accounts in Modi's 'Jan Dhan Yojana' drive.

The past experience shows that most of these accounts remain dormant. But now, with the incentives offered there is a perception that they may have a better chance of being operational. The physical infrastructure (bank branches) also need to expand at the same pace to offer all the banking services than just opening a bank account.