Relaxations through Unlock 1.0 have indicated an improvement of 107 per cent in June versus last month

As India reopens after a long lockdown, some green shoots, especially in the job market, have begun to appear. The overall hiring activity increased sequentially by 33 per cent in June. Hiring activity picked pace across six key industries amidst a tough job market as per the Naukri JobSpeak Report, a monthly Index that calculates and records hiring activity based on the job listings on Naukri.com website month on month. 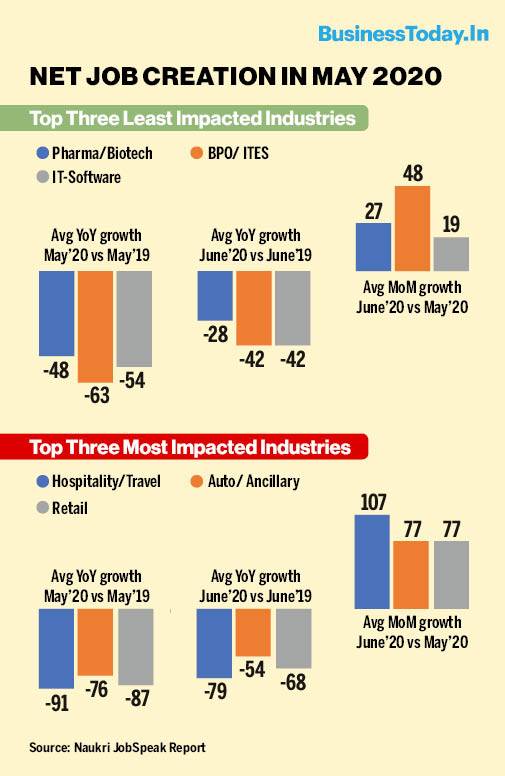 The pharma sector, which has been at the forefront of fighting the global pandemic, has been least impacted in hiring activity. The sector saw a substantial improvement of 27 per cent in creating jobs in June as compared to May. "The city of Hyderabad, a hub for medication supplies to the country, along with Kolkata were the two cities that saw the least decline in hiring activity for the sector," the report added.

The IT-software sector continues to contribute to the growth of overall hiring activities as the leading job creator in the country. The sector, which had been growing strongly in terms of hiring since last year, remains one of the least impacted sectors when it comes to the current global crisis. The last month of the quarter saw sequential uptick of 19 per cent in hiring. Delhi-NCR and Ahmedabad are the two cities leading the revival of the sector recording positive sequential growth, said the report.

The BPO/ITES industry has seen a 48 per cent growth in job listings on Naurki.com in June versus the previous month, with Bangalore and Pune showing the fastest signs of recovery. Being one of the most adversely affected industries, hiring was at its lowest in hospitality and travel in April and May. However, the relaxations through Unlock 1.0 have indicated an improvement of 107 per cent in June versus last month.

According to Naukri.com JobSpeak report, another industry that was most impacted amid the pandemic was the retail industry. The sector picked up momentum in hiring during the month by 77 per cent and improvements are expect in upcoming quarters.

Series of events has put the auto and ancillary industry under the spotlight in the second quarter. Inspite of fighting multiple battles from production to export/import of raw materials, the industry saw 77 per cent month-on-month growth in hiring activity in June. "The cities that contributed to the growth were Pune and Bengaluru", said the report.