Manohar Parrikar's funeral updates: The Central government has declared national mourning on Monday to grieve Manohar Parrikar, during which all schools and colleges in Goa were shut. National flags will fly at half-mast in Delhi and across the capitals of all the states and union territories.

Goa Chief minister Manohar Parrikar passed away at his private residence on Sunday at the age of 63. Following the death of Parrikar, the Centre has announced national mourning day on Monday, March 18. Also, the Goa government has announced seven-day mourning after the chief minister's death.

Meanwhile, Union Minister and senior BJP leader Nitin Gadkari has arrived in Panaji for the BJP legislature meet to search for a new leader to replace Parrikar. Parrikar was heading a coaliation government comprising BJP, Goa Forward Party, Maharashtrawadi Gomantak Party (MGP) and independents. Moreover, with CM Parrikar's demise, the Pananji assembly seat will go for fourth bypoll in Goa where by-elections are scheduled for the Shiroda, Mandrem and Mapusa assembly constituencies on April 23.

He personified humility, simplicity and compassion.

The good work he has done will be remembered for years to come. pic.twitter.com/AX2o3yJZHe 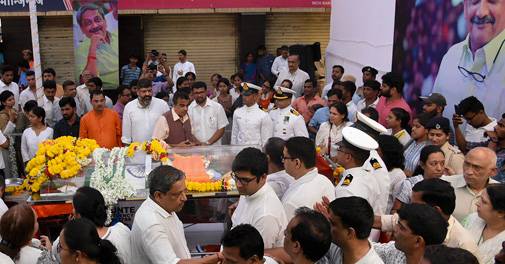 4:30pm: A huge crowd walk behind the coffin carrying the mortal remains of the departed leader, who would be accorded a state funeral with full military honours this evening, according to the home ministry.

4.00pm: Union Home Minister Rajnath Singh said that Manohar Parrikar used to say that despite working in the government, he felt that his heart was in Goa.

3:50pm: Haryana government declared a one-day state mourning on Monday as a mark of respect to Goa Chief Minister Manohar Parrikar. "The State government has decided to observe a one-day state mourning as a mark of respect to the departed dignitary. The national flag will fly at half-mast on March 18," an order issued by Haryana Chief Secretary's office said.

03: 30 pm: Reports suggest that BJP's allies have put forth their conditions to accept the CM candidate suggested by the national party.

03:19 pm: Senior BJP leaders have gathered in Panjim to pay their last respects to Manohar Parrikar. Apart from PM Modi, union ministers Nirmala Sitharaman, and Smriti Irani met the family members of Parrikar and expresseed their condolences. Nitin Gadkari had arrived in Goa in the early hours of Monday to help BJP tide over the power tussle in the absence of Parrikar. Rajnath Singh and Amit Shah will also be present in the funeral.

03:10 pm: Union Minister Smriti Irani got emotional as she was paying her last repects to Goa CM and her former colleague Manohar Parrikar.

02:30 pm: PM Narendra Modi has reached Kala Academy in Panjim to pay his last respects to Manohar Parrikar. Defence Minister Nirmala Sitharaman has also arrived. The mortal remains of the Goa CM will be taken to Miramar beach in a funeral procession starting 4:00 pm. The last rites will be performed around 5:00 pm.

The funeral will happen close to the memorial for first Chief Minister of Goa.

02:10 pm: Goa Speaker and BJP MLA Pramod Sawant and health minister Viswajit Rane have reportedly been shorlisted for the post of Goa CM. The final decision will be taken after taking the allied parties in confidence, Deputy Speaker Michael Lobo told India Today after his meeting with union minister Nitin Gadkari over the matter.

02:04 pm: Manohar Parrikar's body has been brought to Kala Academy in Panjim. People have lined up the to pay their last respects.

01:51 pm: Goa BJP chief Vijay Tendulkar said that the party will decide the next CM candidate by 2:00 pm and the swearing in will happen around 3:00 pm. Tendulkar himself is one of the favourites for the post. Also, the funeral procession of Manohar Parrikar will start around 4:00 pm.

Goa BJP president Vinay Tendulkar: I think everything will be clear by 2 pm. The swearing-in ceremony of Goa CM will happen today around 3 pm. pic.twitter.com/lJ3c95HAv4

01:43 pm: Talking to reporters after meeting the Governor, Chandrakant Kavlekar of Goa Congress said that they have staked claim to form government in the state as they have 14 MLAs. He expressed his sorrow on the demise of Goa CM Manohar Parrikar.

Chandrakant Kavlekar, Congress: We met the Governor&staked claim to form government as we are the single largest party in the state. We have 14 MLAs and we should be given the chance to form the government. We have told that we will prove majority. Saddened by demise of Goa CM pic.twitter.com/vuBtmDd74M

01:35 pm: A delegation of Congress leaders have met Goa Governor Mridula Sinha. The party has already approached the Governor, staking a claim to form government in the state.

01:31 pm: Despite the lack of support from allies, BJP's Pramod Sawant has the best chances of becoming the next Chief Minister of Goa. Viswajit Rane, yet another BJP man, is also a strong contender for the office. BJP is likely to declare its next CM within a few hours.

12:55 pm: Maharashtrawadi Gomantak Party has finished its meeting with Nitin Gadkari. MGP chief Sudin Dhavlikar told India Today that the picture will be clear by 3:00 pm. He has suggested his name for the post of Goa CM.

12:51 pm: The BJP-led alliance in Goa is still indecisive over the who will be the next CM of Goa after Manohar Parrikar. BJP's Pramod Sawant, who is one of the forerunners for the office, has reportedly been turned down by the party's allies in the state.

11:47 pm: There still is no certainity over the next CM for Goa yet. Talking to ANI, BJP MLA Glenn Ticklo said that one of the 12 BJP MLAs should be the one to be named the next CM. The BJP's allies in the state, Goa Forward Party and the Maharashtrawadi Gomantak Party, have not arrived at a consensus either. Notably, Congress has apprached Governor Mridula Sinha, seeking permission to form government in the state.

11:10 pm: Visuals from Panjim BJP office, where hundreds of people reached to pay their last respects to Manohar Parrikar.

11:00 pm: IIT Bombay will hold a condolence meeting for Goa CM Manohar Parrikar, an alumnus of the premium tech college.

10:46 pm: While there is no clarity on who will be the next Goa CM, several names have come up so far. BJP MLA and Goa Speaker Pramod Sawant, and state Health Minister Vishwajit Rane have been suggested by the BJP. Party's state chief Vinay Tendulkar and Shripad Naik are other names doing the rounds. Reports also suggest that Maharashtra Gomatak Party's leader Sudin Dhavlikar has put forward his name for the post of Goa CM.

10:40 pm: Union Minister Nitin Gadkari has arrived at the Panjim BJP office to pay his last repects to his former colleague in the Union Cabinet and Goa CM Manohar Parrikar.

10:32 pm: Union Minister and senior BJP leader Nitin Gadkari is till considering the names of probable candidates for the office of Goa CM in a meeting with legislators from the BJP, the allied parties - Goa Forward Party and Maharashtrawadi Gomantak Party - and the independents.

10:18 pm: People turn up in numbers at the Panjim BJP office to pay their last respects to Goa CM Manohar Parrikar.

Goa: Visuals from BJP office in Panaji. Mortal remains of Goa CM #ManoharParrikar will be brought here for people to pay last respects to him. pic.twitter.com/zSHGEZqwBu

10:13 pm: An event to unveil a new poster of the biopic on PM Narendra Modi was reportedly cancelled following the demise of Goa CM Manohar Parrikar.BJP president Amit Shah was supposed to attend the unveiling, IANS reported.

10:07 pm: The procession with the mortal remains of Manohar Parrikar has reached rhe BJP office in Panjim. Hundreds have arrived at the place to pay their respects.

Goa: Mortal remains of Goa CM #ManoharParrikar being taken to BJP office from his residence, in Panaji. pic.twitter.com/Ksr8afYDNa

09:40 pm: PM Narendra Modi will be flying to Panjim to attend the last rites of Goa CM Manohar Parrikar. The funeral will be performed at Miramar beach in Panjim at 5:00 pm.

09:36 pm: The mortal remains of Manohar Parrikar have been to the BJP office in Panjim, where it will remain till 10:30 am. After that, Parrikar's body will be taken to Kala Academy where the people can pay their last respects. The funeral procession will begin at 4:00 pm.

09:04 pm: The High Court of Bombay at Goa and District will remain closed today, ANI reported.

#Goa: High Court of Bombay at Goa and District Courts in the state to remain closed today in view of passing away of Goa CM #ManoharParrikar.

Visuals from outside the residence of #ManoharParrikar in Panaji, Goa. pic.twitter.com/5M6lzmaVWv

08:45 pm: After Manohar Parrikar, the BJP is left with 12 MLAs in the Goa state assembly, out of total 36 seats. The party has an alliance with Goa Forward Party and Maharashtrawadi Gomantak Party, both of which have three MLAs each, along with three independents. This makes the BJP-led alliance the one with majority in the state.

08:30 pm: The BJP and its allies in Goa are yet to reach a consensus on the successor to Manohar Parrikar as Chief Minister of the state. A decision is likely to be made today.

08:15 pm: Digambar Kamat has refuted speculations of a BJP offer take up the mantle of Goa CM. Kamat had held the post before Manohar Parrikar from 2007 to 2012.

Didn't get any offer from BJP to become Goa CM: Digambar Kamat