Specials
BT Specials
Magazine Archives
News
LATEST
Economy Politics
Tweedledum and Tweedledee of economic recovery; Where it's working - where it's not

Tweedledum and Tweedledee of economic recovery; Where it's working - where it's not

This is an economy of contradictions: Micro economy is seeing signs of life while macro economy is in cold storage; stock markets divorced from the shrinking real economy; rural India is doing way better than urban India

India's eagerly awaited economic recovery appears to be finally playing out amidst a slew of contradictions. Real economy is so divorced from the stock markets that the exchanges are on fire even when the economy is shrinking; rural India is doing way better than urban India; large firms are reporting vastly improved results while medium and small firms are struggling; and industry, particularly, manufacturing has shown signs of life while services sector languishes (because several high growth service sectors such as travel and tourism and aviation are yet to open up fully).

Similarly, micro economy is seeing signs of life while macro economy is still in cold storage. The future though rests on hope that the immediate growth in auto and consumer durables sales, higher GST, e-way bills and improved power demand will not just sustain but accelerate as the economy opens further. For now, though, there is a big hole to fill in this fiscal alone.

However, it's important to remember that these numbers represent dispatch of automobiles from manufacturers to dealers. They do not indicate sale to consumer. Automobile registrations, which represent consumer sales, are comparatively muted at 9.8 per cent in September (Maruti wholesale volumes grew 32 pre cent in September, for instance). October registration volumes are still to be declared.

More importantly, while the industry sold 2.72 lakh passenger vehicles in September, registrations topped only 1.96 lakh, indicating inventory build-up at the dealers. Maharashtra, UP and Kerala reported the highest registrations. In two wheelers, 18.5 lakh units were sold in wholesale during September while 10.17 lakh were registered.

In October, India's power demand has shot up 13.38 per cent to 110.94 billion units over October 2019. Without doubt, industrial activity has picked up since lockdown opened. However, the October power demand has been extrapolated from the demand in the first 15 days of the month when consumption rose 55.37 BU. This is after a string of contraction in months till date-23.2 per cent lower in April, 14.9 per cent in May, 10.9 per cent in June, 3.7 per cent in July and 1.7 per cent in August.

October GST numbers, representing September filings, have hit an 8-month high of 1.05 lakh crore, crossing the psychological mark of Rs 1 lakh crore for the first time this year. But they need to be looked at cautiously so that they don't flatter to deceive.

Besides higher economic activity, experts are attributing the growth in GST numbers to a host of factors: One, in the wake of the pandemic the government had allowed companies to defer GST payment and those may have been filed now; two, the GST numbers would also represent the interest on late payment-as high as 18 per cent for delayed payment beyond June this year; three, September 30 was the deadline to claim input tax credit for the past year and may have seen arush to file returns. 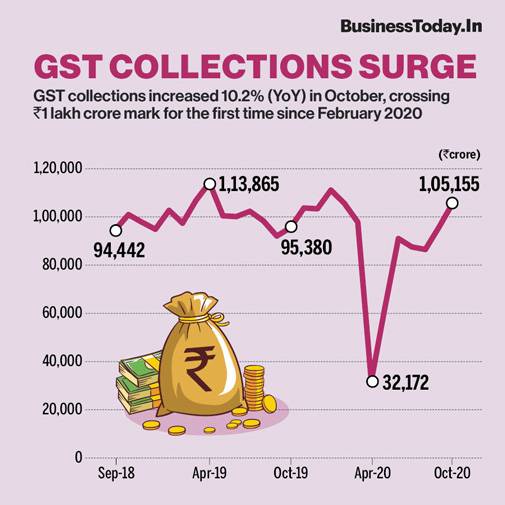 E-way bills - mandatory for movement of goods in excess of Rs 50,000 -- have also shown consistent growth since lockdown opened. From a low of 2.5 crore e-way bills in May, 2020, in October 20, bill generation jumped to 6.42 crore. This reinforces the opening up of industrial activity.

But, remember, e-way bills only represent manufacturing, trade and transportation of goods from industry. But more than half of India's economy comprises services-which are still in the grip of Covid-induced lockdowns and restrictions.

If there are definite signs of life emerging in some pockets of the economy, other areas remain in deep freeze. Centre and states have both gone slow on public expenditure and capital expenditure which has clearly slowed the only functioning engine of the economy. India's trade deficit has narrowed. But that's not so much because of drop in imports (which is real and would benefit the economy) but also due to a crash in exports. Private investment has taken a severe beating as is evident from even the new project announcements. India, which was averaging new project announcements worth over Rs 3 lakh crore per quarter is now struggling at under Rs 75,000 crore of new projects of late. Yet, multiple indicators provide hope. CMIE's unemployment rate has fallen from the worst 23.5 per cent in April to just under 7 per cent till October. With companies raising output to the greatest extent in 13 years amid robust sales growth, manufacturing sector continues to improve in October. India's manufacturing PMI recovered to 58 from the lows of under 30 during the lockdown. Petrol and diesel sales have breached the last year's numbers, signalling a strong recovery for the economy ahead of the festive season. But it's still a game of Tweedledum and Tweedledee. Signs of an all round recovery encompassing a majority of the areas in the economy appear distant for now.

Also read: Rebooting Economy 42: How will changes to land laws in Jammu and Kashmir help, and whom?