Indian export is globally uncompetitive because of high cost of credit, poor skill and innovation and high tax component which the government needs to address

India's net export, one of the four key components of the GDP, has been in negative zone for decades, proving a big drag on its growth story. The gap between India's export and import has been growing bigger and bigger in the past decade. It crossed the $100 billion mark in 2008-09 and has remained above that since, clocking $184 billion in 2018-19.

Higher the negative trade balance, higher the current account deficit (CAD) and higher the drag on foreign exchange reserve . This has been a cause of prolonged anxiety.

Declining growth in export of merchandise and services

After a sudden spurt in 2010-11 and 2011-12, India's export growth has declined to single digit, both for merchandise and services, in US dollar terms.

The share of services in exports has been growing in recent years. From about 32% of the total value of exports a few years ago, it contributed more than 38% in the last two fiscals. 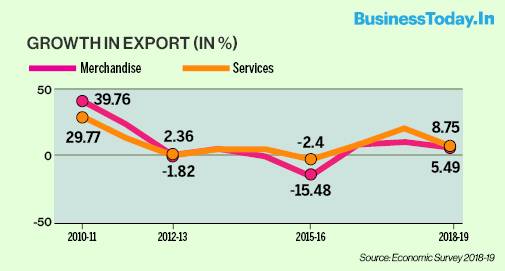 When looked from the global perspective, India's export growth does not look as bad.

The global statistics provided by the UNCTAD shows growth in India's export of merchandise follows a general trend, indicating a close link with global economy. In 2018 (financial year), India's export growth was 8.8% against the global growth of 9.8% in US dollar terms - changing the position from 2017 when India clocked a 13.3% growth while the global export growth was 10.6%.

Prof Biswajit Nag of the Indian Institute of Foreign Trade (IIFT) explains that this is so because India's export is mostly to the developed countries. As the major exporters like China, the US, the EU and Japan are slowing down their export, demands are also slowing down - reflecting a general declining trend. 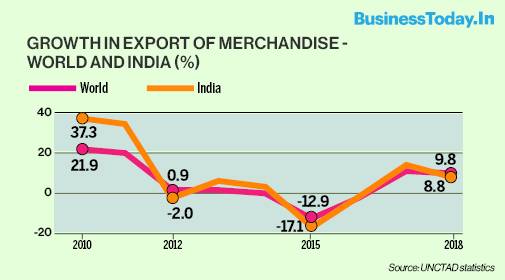 A comparative analysis of growth in export of merchandise for Asian leaders like China and South Korea and new export hubs like Vietnam and Indonesia also show a similar declining trend. 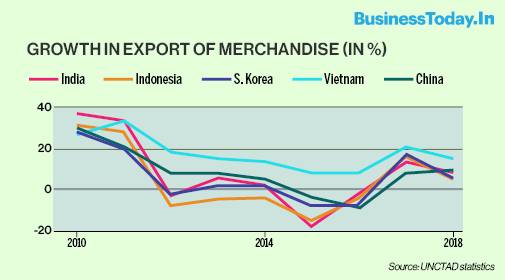 Prof Nag says China's export surged because it adopted an export-oriented approach, specialising in industries with higher export potential. It tried to benefit from economies of scale and focussed on SEZs and other trade related infrastructures like ports, logistics and single-window clearing system. Equally importantly, China adopted a long term strategy of skilling its labour force which made technology absorption much easier and allowed it to move up in the global value chain, leaving low end products to low wage countries like Vietnam and Indonesia.

On the other hand, he says, India could not achieve the desired level of skilling, leading to export inefficiency. 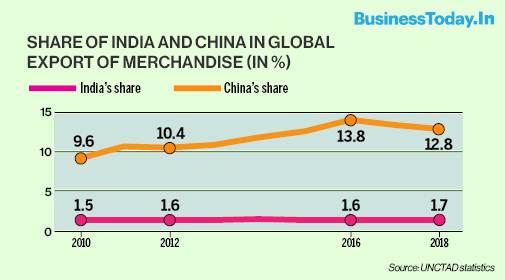 Engineering goods, gems and jewellery and ready-made garment (RMG) of textiles are three of the top sectors contributing most to India's export in value and are of great significance because of their labour intensive nature, providing high employment.

The RBI's data presents a disturbing trend. Growth in the export of engineering goods, which constituted 25% of commodity export earnings in 2018-19 in US dollar terms, fell to 6.3%, from 17% in 2017-18. The same for the gems and jewellery and RMG of textiles, which constituted 12% and 5% of commodity export in 2018-19 (in US dollar terms) respectively, have registered negative growth for the last two fiscals. 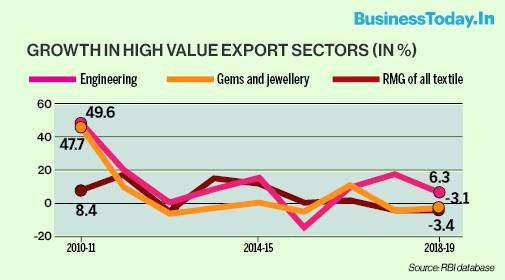 Prof Nag explains that the gems and jewellery segment has been negatively impacted by the rising value of import content, which has made India's export uncompetitive. Besides, a global slowdown is impacting consumption of such luxury products.

As for the negative growth in RMG of textiles, he points to a number of factors: India's ecosystem is dependent on import of inputs; its "delivery lead time" is much higher than that of China, reflecting supply chain inefficiency; countries like Vietnam, Bangladesh and Sri Lanka provide cheaper labour with which India can't compete; world is moving into the blending of fabrics (cotton and synthetic) for which India is not yet ready in technology terms and lack of new capacity additions in India as a result of which most of its products are consumed domestically, leaving little surplus for export.

As for the engineering goods, the chairman of the CII's National Committee on Exim Sanjay Budhia says input costs have gone up in recent years (steel price went up by almost 20% in one year), making it uncompetitive.

Budhia says the US-China trade war presents a big opportunity for India to boost its exports significantly to the US and elsewhere. He says India's products have established their quality but are not yet competitive. He says three factors are holding India's export back.

One, high cost of credit to Indian exporters - 6-7% interest rate for Indian exporters while it is nil or negligible for Chinese and Vietnams. India provides 3-5% of interest equalisation for the MSMEs which should be available for all exporters to bring down cost.

Two, inputs like steel should be provided at competitive/export prices that are offered to international buyers by steel mills to all exporters, not just the MSMEs as is being contemplated by the government now. Steel mills get duty drawbacks and incentives reducing international price of steel but without such facility for the domestic consumers, export of engineering goods - which has a huge potential to increase its market share and provide sizeable employment - becomes uncompetitive.

Third, electricity duty, taxes and duties on petroleum products etc. are not yet refunded through the GST mechanism for the exporters. The government should offset the cost disadvantage arising out of these duties and levies.

Also Read: Decoding slowdown: Investment is falling; neither central government nor private sector shows any appetite for it