The economy looks set for a sharper rebound in the third quarter of the current fiscal with key high-frequency indicators like e-way bill generation, card transactions, and purchasing managers index (PMI) posting record-high growth in October.

The continuing downward trajectory of Covid-19 cases and the high rate of vaccination reinforces the economic recovery outlook going forward.

E-way bill generation surged to the highest ever in October at 7.35 crore amid a packed festive season, brightening prospects of further pick up in goods and services tax (GST) collection in November. 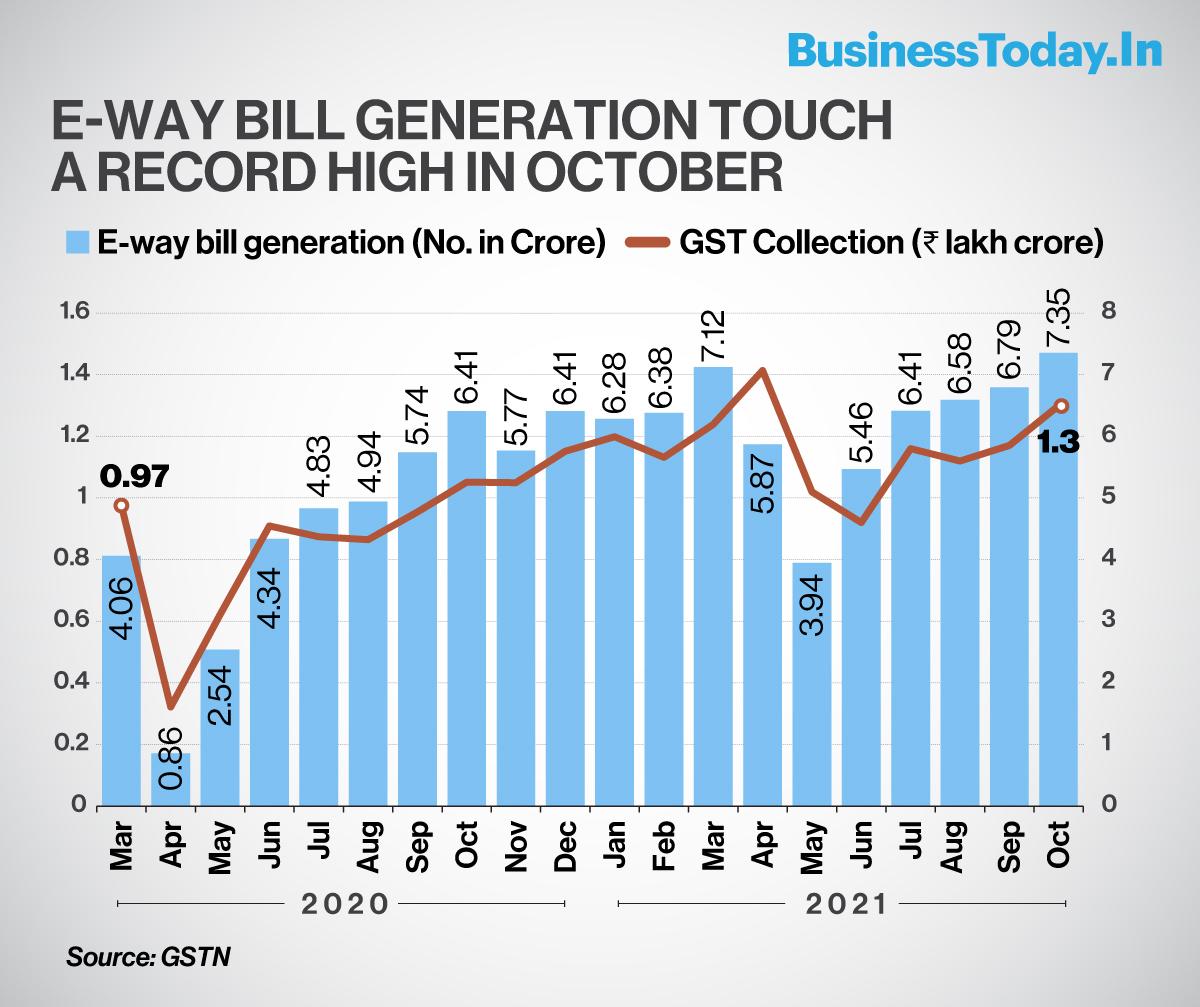 The GST mop-up may touch the Rs 1.4 lakh crore mark in November, from Rs 1.3 lakh crore in October, which was the second-highest mop up since the rollout in July. This can be attributed to increased compliance and enforcement measures.

Meanwhile, activity in India’s largest sector- services- accelerated to a ten and a half-year high in October on the back of strong demand, which drove sales and output, according to a private survey.

The IHS Markit Purchasing Managers' Index (PMI) for services rose to 58.4 in October from 55.2 in September despite companies increasing the prices of their products due to expensive raw materials.

Firms were able to secure a healthy intake of new work despite charging more for their services. As PMI manufacturing was also at an 8-month high in October, the Composite PMI Output Index rose from 55.3 in September to 58.7, signalling the strongest monthly expansion since January 2012. Another indicator of sharp consumption revival is reflected in the Reserve Bank of India’s (RBI) card transactions data, which was at least a one-year high in October in value terms.

Cards transactions – debit and credit- at both point of sale and online worth Rs 1.37 lakh crore took place in October, which is 20 per cent from September and the highest since the time RBI started releasing the cards transaction data. “All these indicators point out towards economic recovery. However, we have to see whether these are pre-festive/festive season demand. If this trend is maintained post-festive season, we may see economic recovery slowing finding its feet on ground,” said Devendra Kumar Pant, chief economist, India Ratings.

India's merchandise exports rose for the eleventh straight month in October growing by 42.33 per cent year-on-year (YoY) at $35.47 billion. While imports grew by 62.48 per cent during the month, the non-oil, non-gold category surged further to $35.8 billion in October reflecting a turnaround in domestic economic activity,

“This is good news and one hopes this is also so in rural India. There is pent up demand in services now with the opening of the sector and progressive growth will be smarter. Performance may be slightly better than expected and we need sustenance of this spending,” he said.

According to the data by the GST Network (GSTN), the IT backbone of the unified indirect tax regime, the average e-way bill generation in October touched 23.7 lakh per day from 22.6 lakh in September, a sequential growth of nearly 5 per cent.

The GST collection numbers for November would largely capture transactions or supplies made in October.

“We expect GST collection to be higher in November. It will definitely be higher than Rs 1.35 lakh crore and looking at the e-way bill data, one may say that it can even touch Rs 1.4 lakh crore,” said a government official.

E-way bills are compulsory for the movement of all consignments worth more than Rs 50,000, hence is an early indicator of trends in demand and supply in the economy. This reflects in macroeconomic indicators with a lag.

Aditi Nayar, chief economist, ICRA said that the headline GST collections are slated to remain healthy in a range of Rs. 1.25-1.35 lakh crore in November 2021.

“Overall, we expect the CGST collections to exceed the Centre’s FY22 budget estimate of Rs. 5.3 lakh crore by up to Rs 50,000 crore,” said Nayar.

She suggested that while volumes are looking up, commodity price headwinds may compress the improvement in GST growth.

ICRA has estimated the second-quarter growth at 7.7 per cent from 20.1 per cent in Q1 and expects it to moderate to under 6 per cent in the third quarter of the fiscal on the back of normalisation of base. It had revised up its 2021-22 real GDP growth estimate for India to 9 per cent from the earlier 8.5 per cent

“The festive season has served as an “additional kicker’ for recovery in economic activity to continue into Oct-21 aided by low run-rate of COVID cases, easing of lockdown restrictions and progress on vaccination,” said Yuvika Singhal. Economist, QuantEco Research.

"For now, hold on to our FY22 GDP growth estimate of 10% with mild downside risks,” added Singhal.