India too has plunged headlong into AI and machine learning (ML) with numerous start-ups offering AI solutions in areas such as banking, logistics and transportation.
Avirat Parekh

It is a truism that artificial intelligence (AI) is set to change the world in unimaginable ways. The giants of the tech industry have realised it and are investing heavily in it, as can be seen, for instance, from Microsoft's $1 billion investment in OpenAI, which in turn was founded by Tesla's Elon Musk, and seeks to use AI to benefit all of mankind. Again, Twitter has acquired four AI companies - the biggest of them being Magic Pony for $150 million in 2016 - in its bid to improve its system of recommending specific tweets in users' timelines. Even traditional businesses are using AI to improve their services, such as UK-based grocer Nisa Retail employing Amazon Web Services to meet its business challenges.

India too has plunged headlong into AI and machine learning (ML) with numerous start-ups offering AI solutions in areas such as banking, logistics and transportation. But so far the smaller businesses - there are an estimated 45 million micro small and medium enterprises - barring a few have been wary of using AI, mainly because of their traditional nature, many of them being family driven. But to meet global competition, make better decisions, reduce costs and increase productivity, they will soon find it imperative to do so. 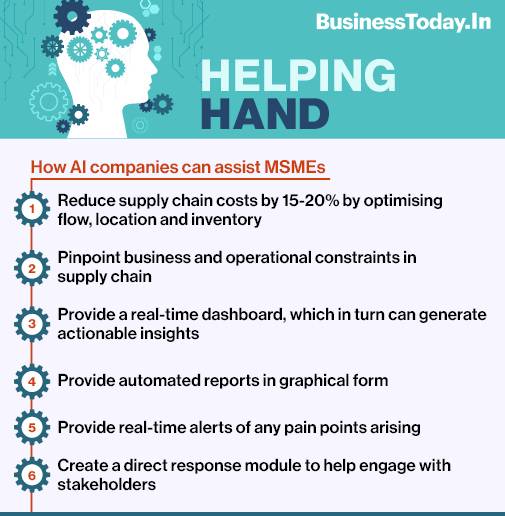 "Small businesses do have an online presence, but it is mostly on social media platforms such as Instagram and Facebook," she adds. "But they have to realise that sooner or later intelligent solutions will become a necessity for them. They will need to automate processes to cut costs and achieve scale."

One company that has already done so is the Kolkata-headquartered Rollick Ice Cream. Using the services of AI start-up Locus Solutions, it has grown from a small outfit with outlets only in West Bengal and Jharkhand to post revenues of Rs 50 crore with over 400 distributors in 15 states, producing 80,000 litres of ice cream daily. "I had seen my parents work hard throughout my childhood, so it was natural for me to come back from the UK after my MBA and take the brand forward," says Anisha Aggarwal, who now runs the company set up by her father. Locus's logistics optimisation network has helped Rollick reduce logistics costs by eight per cent.

Krishna Khandelwal, Chief Business Officer, Locus, believes they can be lowered even further to 15-20 per cent. "We focus on tailor-made network optimisation solutions for our clients," he says. "For manufacturing companies, for instance, we make digital models of their supply chain from the bottom up, optimising various scenarios on the basis of flow, inventory and location, showing them what each one's cost impact will be. Every mile of the supply chain can be automated using proprietary algorithms and deep learning to remove dependence of human discretion in decision making." The technology even takes into account unpredictable on-ground factors.

Another of Locus's clients is Big Basket which has grown into the country's largest online grocer, rising from a valuation of Rs 30 crore to Rs 7,000 crore. Big Basket began looking for AI solutions three years ago when it was struggling to cope with growth, with around 1,500-2,000 delivery vehicles plying on 3,000-5,000 routes across nine Indian cities. Since then its fleet size and routes have increased threefold, but it still manages 99.5 per cent on time deliveries to its 10 million customers thanks to AI. Locus's AI algorithm analyses traffic data and tallies it against the committed delivery slot making timely deliveries at the lowest cost. It accurately maps end-customer locations and builds dynamic route clusters, varying according to the workload, while also leaving room for flexibility in planning for multi-nodal and multi-hub drop offs. It even recommends the number and type of vehicles to be used, thereby enabling maximum vehicle utilisation.

Other AI companies rapidly gaining ground include Drizzlin Media and Germin8. Drizzlin, whose clients include Airtel, Max Life Insurance and State Bank of India, uses AI for its clients' social media marketing, working to humanise brands. Using a holistic approach, it identifies 'perception gaps' of its clients' brands and works to overcome them among targeted social media users. Similarly, Germin8, started 11 years ago, assists its clients' social media marketing using AI. Among its products is Germin8 Social Listening which collects and analyses social media conversations in real time and converts them into actionable insights and leads. "We help businesses to act in real time on stakeholder or customer conversations," says Ranjit Nair, CEO, Germin8. Its listening set up comprises a real time dashboard (on which the insights are generated) automated reports (of recordings, by graphs), real time alerts for the client and a direct response module (through which it engages with stakeholders).

Nair cites the instance of a travel company - whose identity he preferred to protect - which wanted to ensure that any complaints arising among its customers during tours it organised were promptly addressed. "The company wanted to avoid people complaining about it on social media platforms as that would negatively affect its image," he adds. "Germin8 listened to the customers' conversations around keywords and alerted the company within minutes every time a conversation pointed to a negative situation." The company used the information to immediately contact the tour guide or person supervising to resolve the problem. "If, for example, travelling customers did not get their meals on time, it also contacted them personally to apologise and sort out the issue," says Nair.

AI companies are flourishing in the US, but in India they still find it difficult to scale. "I think the biggest difference between the two markets is customer mindset," says Nair. "In the US, companies are more accepting of new technologies and willing to pay for them. The appetite for risk is higher." Lack of awareness among Indian MSMEs makes matters worse. But the situation is also changing, depending on the nature of the company's leadership, its rate of digitalization and the scale and area of its operations. "Modern MSMEs, especially those in manufacturing, see the sense in investing in AI solutions, since they know more and more automation is coming," adds Nair. The AI market is bound to grow and those already in the business will be able to use the transition to their advantage.